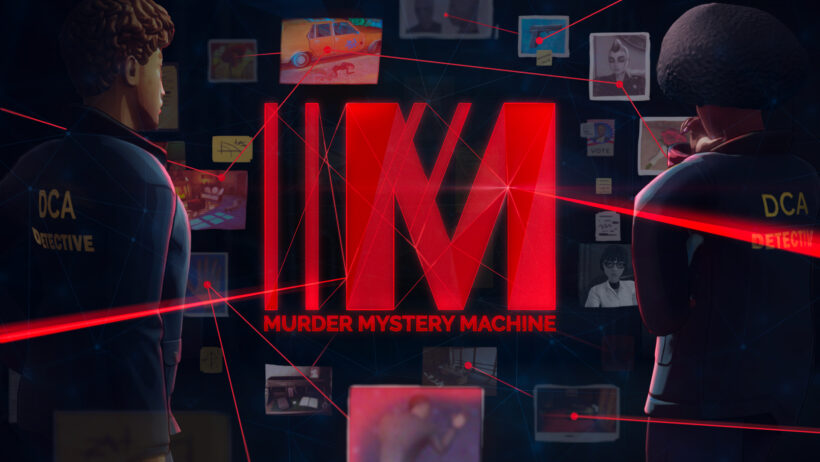 The title says it all, in terms of what this game review is all about, but you could be forgiven if your first thoughts may have drifted to Scooby Doo and the gang, but I can assure there are no colorful vans, and pesky kids here!

Murder Mystery Machine Is an Isometric, modern noir deduction thriller from Microids indie label and is the third title that they have produced. You may have heard of the other two, Fallback and the Kingdom Majestic compilation.

The aim of Microids new Indie publishing label is to provide support to the up and coming generation of indie studios and developers that this industry desperately needs. I applaud Microids for reaching out, and helping these new studios realise there dreams as they launch their titles, In what has become a very different industry in terms of finding new talent, polishing and releasing games in to the market. The Gaming industry can be very cut throat at the best of times, but Microids are leading the way In support, lending knowledge and experience during difficult times. 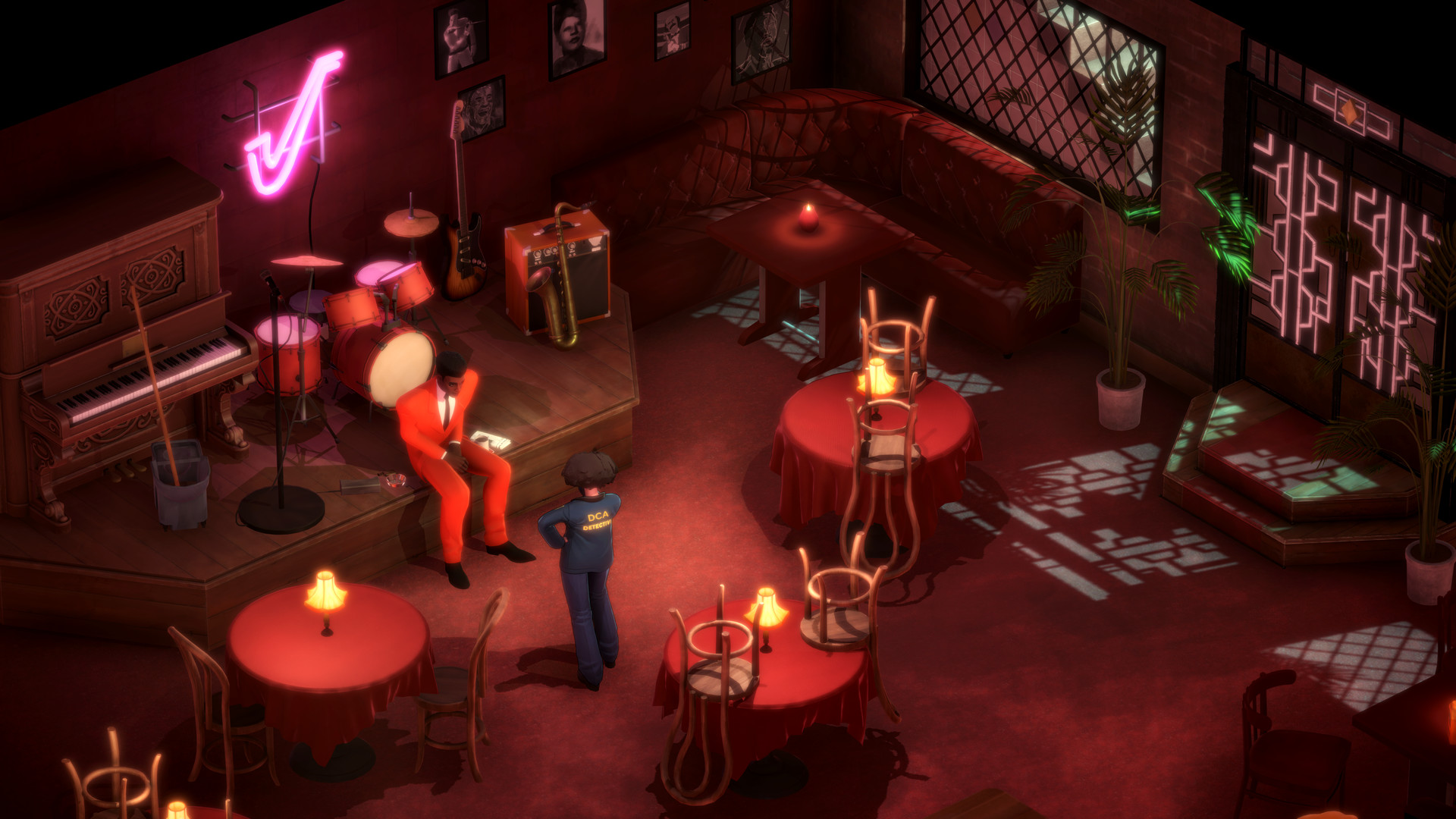 Murder Mystery Machine is game where you have to hone your detective skills, visit crime scenes, collect the available evidence, ask the right questions, in order to obtain vital information that will lead you through the investigation.

As an investigator you join the District Crime Agency, where you get to explore crime scenes in complex dioramas, using an isometric view point it’s up to you to discover the evidence. Leaving no stone unturned, you have to make the scene work for you, by changing the view point as you scroll through the different angles, unveiling new view points and vital evidence that you couldn’t quite see from the previous camera position. 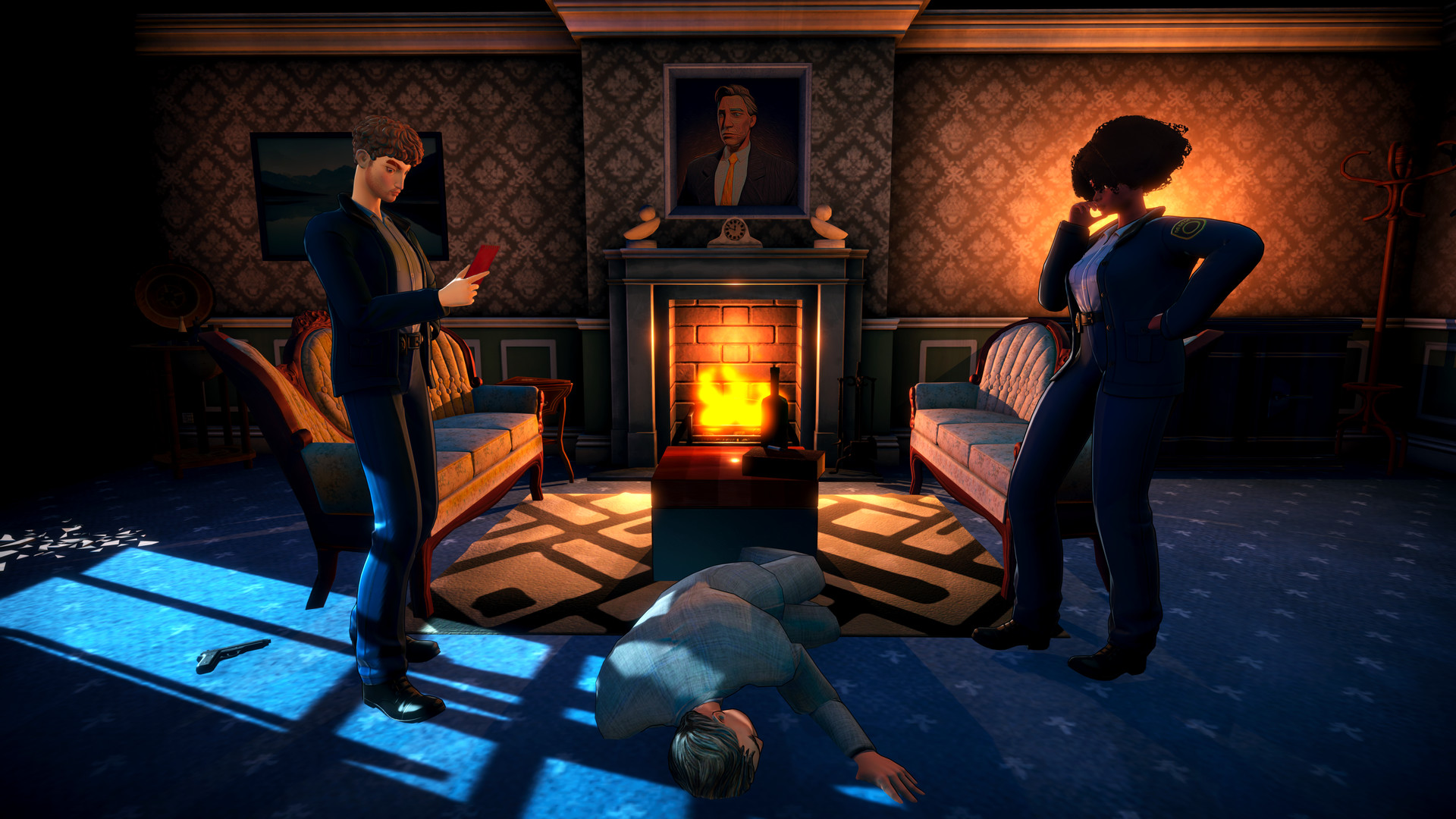 Like all good detectives you have to make the clues work for you, use the evidence efficiently and effectively by orgainising, assessing. Once you are comfortable with how you’ve laid out your arsenal of clues, it’s on you to work out the right and the wrong, as you present your case going forward, unlocking new dialogues of questioning and potential suspects.

With Murder Mystery Machine you will quickly find out that witnesses often have a lot more to say, as you dig a little deeper. Learn how to play your cards close to your chest, and figure out how to get the witness or suspect singing from a different song sheet, it will make all the difference! 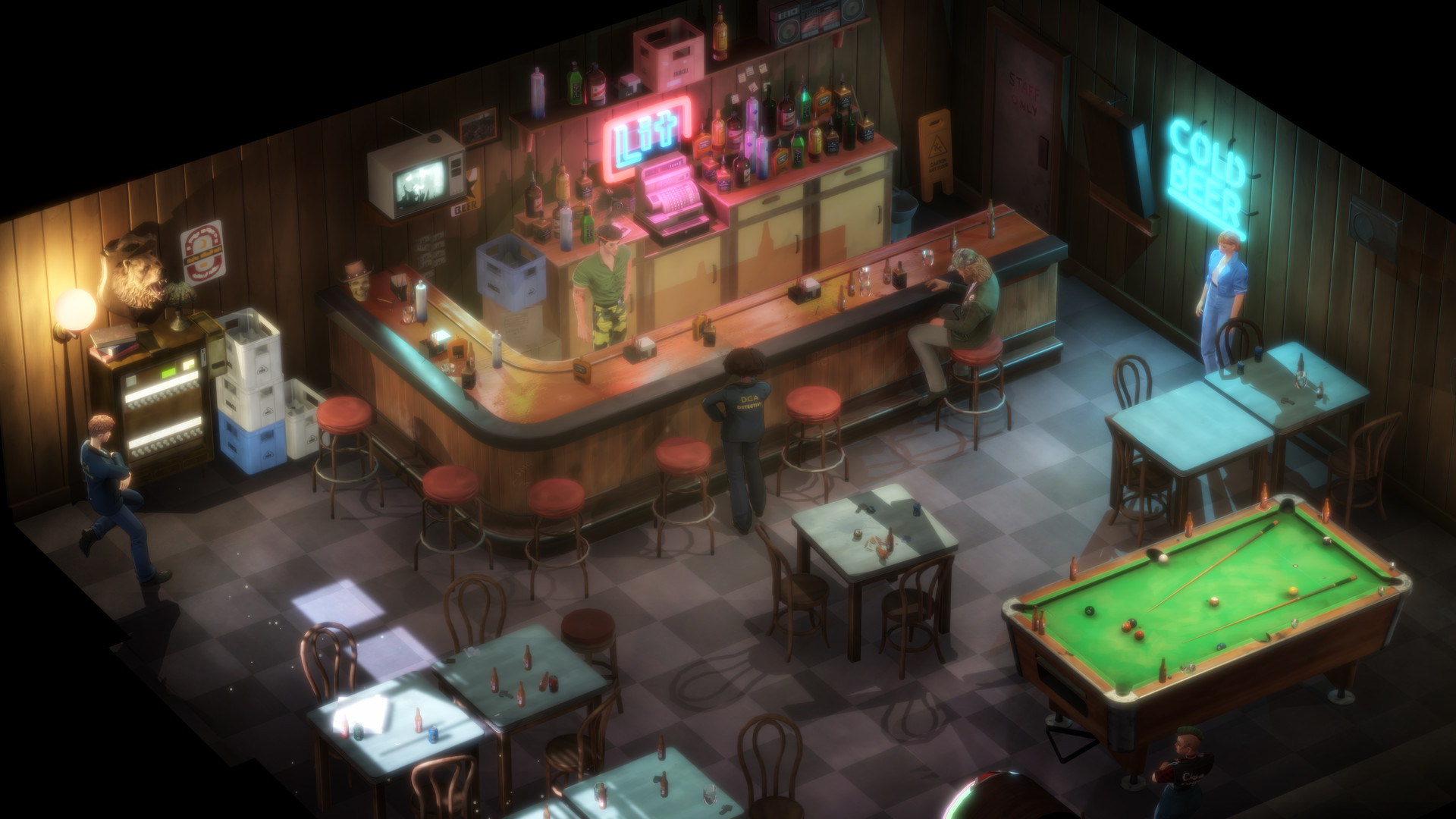 I won’t spoil the story to much, as it’s up to you to figure out the murders, the disappearances and the many conspiracies, that you will encounter as a lead Investigator.

The game starts with you joining the D.C.A, the District Crime Agency. You play the role of a young recruit named Cassandra Clarke who joins Nate Huston, a rundown, jaded detective, the sort of old school, going through the motions type. As a partnership, it’s your job to solve the cases no one else is interested in taking on.

The story begins with a politician called Frank Daniels found dead in his home, you investigate the scene, in what appears to be a burglary gone wrong. The two heroes of the story, Cassandra and your washed up partner, will quickly find yourselves in the dead end, as you quickly become involved in a series of complex and interconnected crimes. Investigate multiple crime scenes, putting use your analytical and deduction skills to the test. 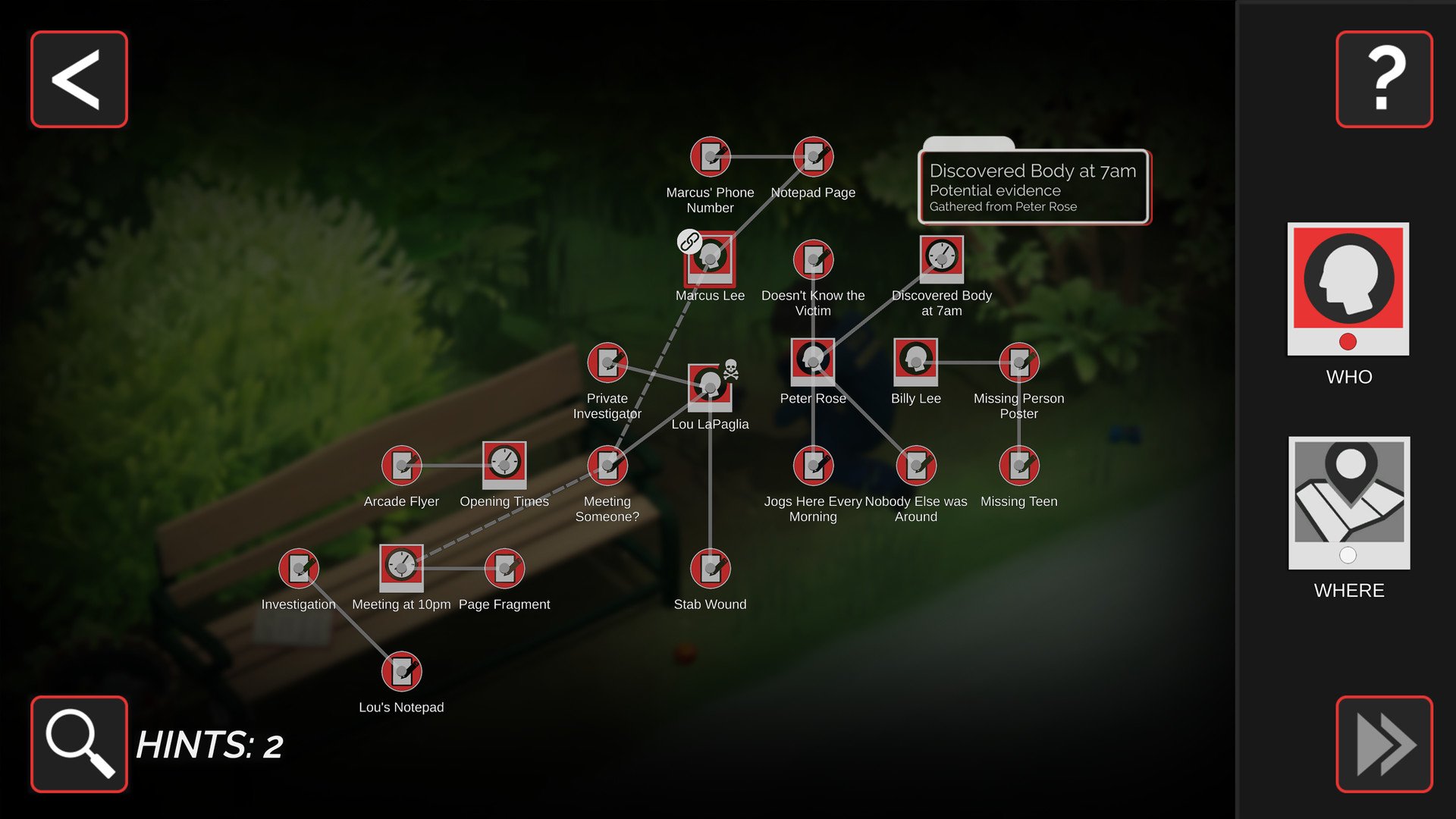 Will you come out on top?

From the very start, collect all the clues, pay attention to the dialogue and what your witness or suspect has to say, and try to connect the dots. Interrogate suspects, may lead you on the wrong path, but hit the right notes and you will find the truth, thus unlocking the next act and potential destination in the story, oh and don’t be afraid to lean on your partner, he’s there for a reason. Not all cases are open and shut.

Murder Mystery Machine is visually pleasing on the eye, making excellent use of colour to enable that modern film noire experience, add to that a fantastic Isometric crime scene, which really helps you navigate the scene and uncover new clues that you perhaps didn’t see from the first look. The camera angels are very clever and work well, with the direction and aim of the game, adding to the thrill of investigating and scouring the crime scene for that vital clue.

Questioning the suspects can prove frustrating at times, as you often feel that you have found, everything there is to find, unlocked the possible paths of the deduction, yet don’t always appear to be fruitful, the dialogue can often feel a little long winded, and I was guilty of switching off once or twice, thus not paying attention to what was being reviled, or sometimes what was right in front of me. 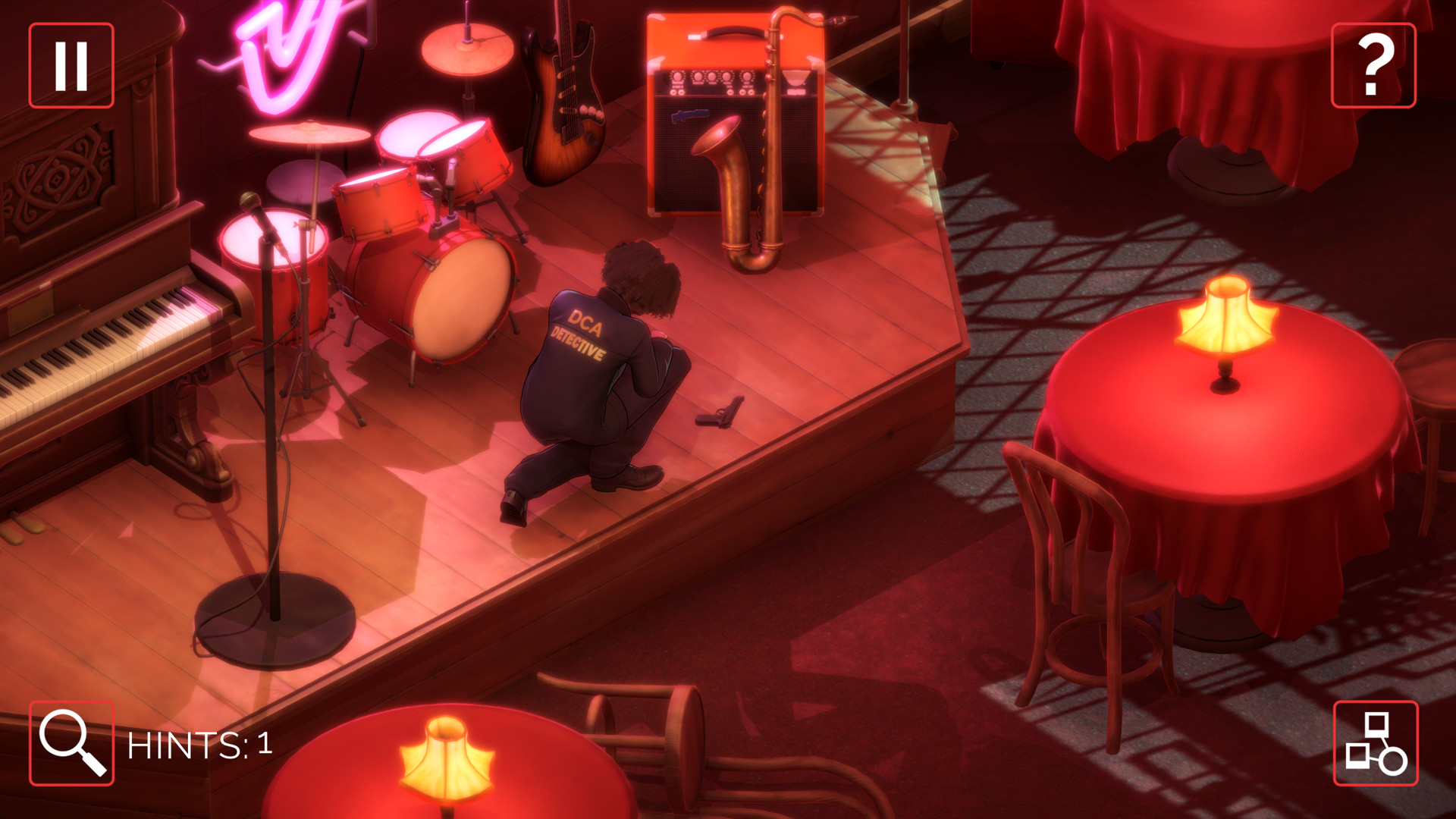 Stick with the story and the dialogue though as there is a very good crime detective game unfolding before your very eyes. The story is very much inspired by classic film noir, written by film & Tv professional at a BAFTA award winning company named Blazing Griffin. The descriptive dialogue does a really good job with the complex characters, and pervasive settings, giving the clues for the ultimate who, what and why experience, I just feel that it is let down by the lack of atmosphere within the game, even the music misses a tune, lacking the suspense music to really set the right tone for the ultimate murder mystery. 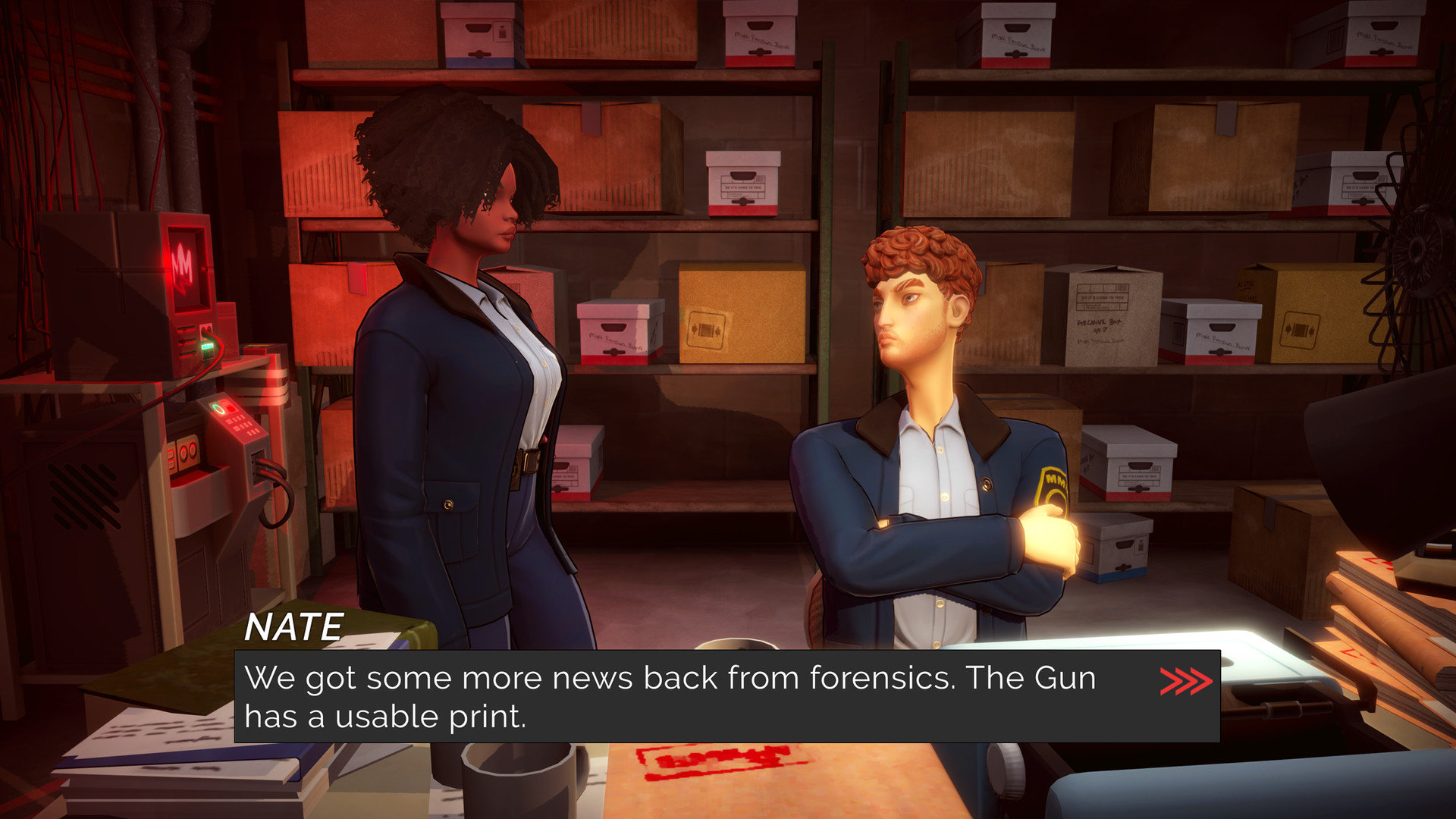 Overall, I think the game works well, with a detailed plot that is very well written, it could easily be a tv show or film script. I just fear that people may switch off, or cycle through to the games lack of atmosphere. As a murder mystery it is packed with features, that will have any murder mystery fan intrigued, and as I mentioned above, Murder Mystery Machine, is well written and fans of the genre will love what is on offer.