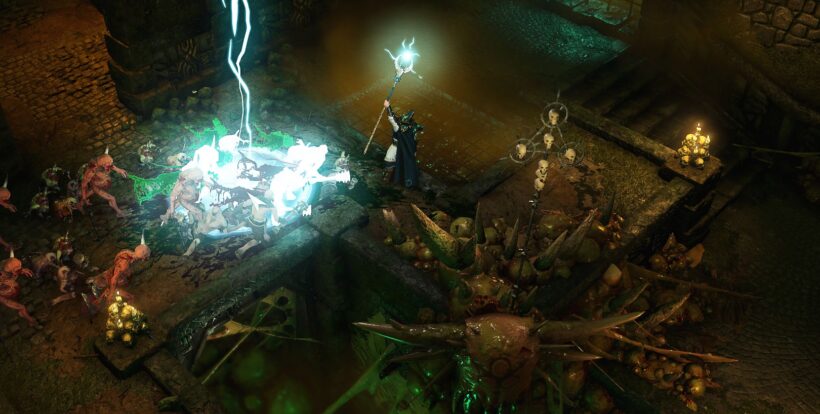 Warhammer: Chaosbane, an action RPG set in the old world of Warhammer fantasy featuring 4-player co-op. Last week I had the chance to check out Eko Software’s closed beta to see what it has to offer a fan of the Warhammer universe.

On start-up you’re shown 4 characters: Soldier, Mage, Waywatcher and Slayer all offering varying abilities. The beta was only locked to Soldier and Mage, which was a slight disappointment as the other two characters were the more appealing of options. However, the devs did explain they are still polishing up these two classes, to be available in the full game.

Soldier is a melee focussed class with plenty of hack and slash as well as some area focussed attacks for cleansing larger amounts of enemies. The enemies you’re fighting here in are creatures summoned by the Chaos Gods, with there being over 70 types of enemies in the full release.

“If you’ve played Eko Software’s How to Survive you can definitely see some elements of dev work particular in the co-operative gameplay.”

As for mage, this was definitely a more enjoyable class to play what with the various abilities you can toy around with to devastating effect such as the lightning orb which you can assume control of and move around the map attacking enemies or it can also be used for pulling enemies to you rather than larger groups.

If you’ve played Eko Software’s How to Survive you can definitely see some elements of dev work particular in the co-operative gameplay, another comparison I drew it to was The Incredible Adventures of Van Helsing by Neocore Games. The controls felt fluid and the RPG elements work pretty much identically to these titles mentioned, in that you can customise all items of equipment and levelling unlock skill points to spend to make you stronger.

With over 180 skills to master you can also guarantee your party of four won’t have the same character builds either, so there’s plenty of reason to play the game in co-op. At times the camera focus felt a bit stiff for co-op, but as valuable given feedback by players I’m sure this will be fixed in time for full release.

As for locations, generally the world has been plunged into darkness by the Chaos, so with that in mind the areas are very dimly lit and there are plenty of dark and damp corridor like maps which create a hectic ambush for enemies to really challenge you. The game also includes iconic locations such as Nuln or Praag. Nuln being the most intriguing as it’s the second largest Imperial city and largest manufacturer of munitions and blackpowder warmachines within the entire Empire of Man. In terms of scale it is also huge so apart of me is excited to see how much Eko let us explore.

The full release is available for all from 4th June and that date holds a prospect of excitement for what this could behold. The lore and locations of the Warhammer Fantasy world always has been a popular universe in video games with a mix of titles releasing over the years. If Eko Software can get co-op to work well with the character classes though, then they’re onto a real winner.

You can pre-order the game today which has 3 editons with various add-ons.