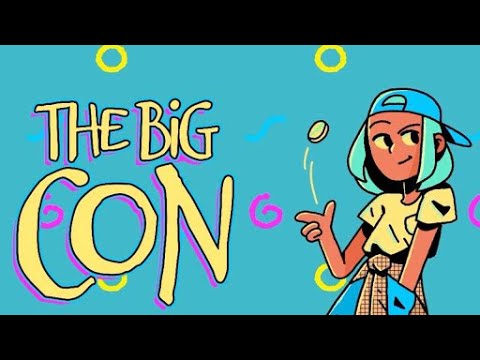 You (yes, you!) can audition to voice all thirteen (13!) spoken words of dialogue in The Big Con’s new community contest

Indie developer Mighty Yell and publisher Skybound Games are paging to say the ‘90s cross-country adventure game The Big Con will launch on Aug. 31, 2021, for Xbox Series X|S, Xbox One, and PC via Steam for $14.99 / €12,49 / £10.74. A classic teenage coming-of-age story, The Big Con is a hilarious trip featuring open-ended narrative, sneaky situations, puzzles and exploration… and lots of petty theft and grifting!

Mighty Yell’s new behind-the-scenes trailer announcing The Big Con’s release date is a deep dive into the ongoing process to audition for the game’s sweeping, sprawling screenplay, an unabridged manuscript of thirteen weighty words (not a typo, it’s 13 words long). With each individual syllable carrying so much theatrical gravitas, there seemed only one logical solution: invite fans to submit their own recorded performances for a chance to have their voice appear in the game itself!
Mighty Yell asked some of gaming’s most accomplished thespians to spread the word about this search for the industry’s next big stars. Four greats who will not appear in The Big Con itself, but who are featured in the game’s new trailer — Troy Baker (The Last of Us, Uncharted), Dave Fennoy (The Walking Dead), Melissa Hutchison (The Walking Dead), and Courtenay Taylor (Mass Effect, Resident Evil) — have helped kick off this fun community contest today.
From July 22nd until July 29th you can submit your very own audition tape! We’ve made it radically easy for anyone to rival some of the industry’s best voice talent. It’s never been simpler, just go to https://www.thebigcongame.com/bigcontest to learn how.
The Big Con is all about Ali, a teenage con artist trying to save her mom’s video store from unscrupulous loan sharks any way she can. In this colorful adventure filled with punchy puzzles and dialogue, how you make that money is up to you: travel across the country picking pockets and locks, persuading marks, sneaking around in disguises, and even profiting off the latest plushie fad.