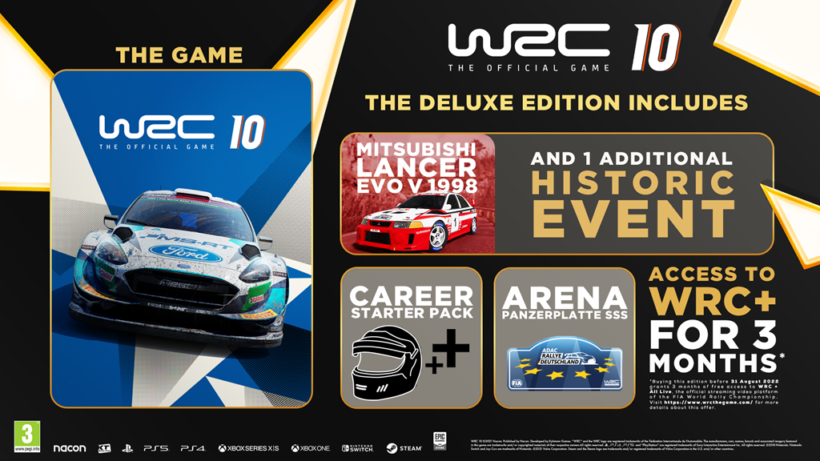 NACON and KT Racing studio are pleased to unveil more information on the Anniversary Mode and Deluxe Edition of WRC 10, the official game of the FIA World Rally Championship, currently available for pre-order on PC, Xbox Series X|S, Xbox One, PlayStation®5 and PlayStation®4.

Starting September 2, a real journey through time awaits rally fans from all over the world. To celebrate the 50th season of the Championship in 2022, developers from KT Racing imagined a brand-new Anniversary Mode tracing some of the most outstanding rounds of the competition.

In emblematic countries of the WRC, including 6 rallies never seen before in the official saga of video games, slip into the skin of the greatest drivers and relive with them the most spectacular moments of their career, with the vehicles and the weather conditions of the time.

WRC 10 Deluxe Edition – Even more WRC
The most impatient gamers may opt for the Deluxe Edition of WRC 10, offering an early access to the full game 48h before the release, as well as exclusive additional contents:
Lastly, any player pre-ordering WRC 10 in Standard or Deluxe Edition will have access to an additional historical event of Rally Sanremo: the famous Colin McRae driving the Subaru Impreza WRC in 1997! WRC 10 will be available on 2 September 2021 on PlayStation®4, PlayStation®5, Xbox One, Xbox Series X|S, PC and on Nintendo Switch™ at a later date.