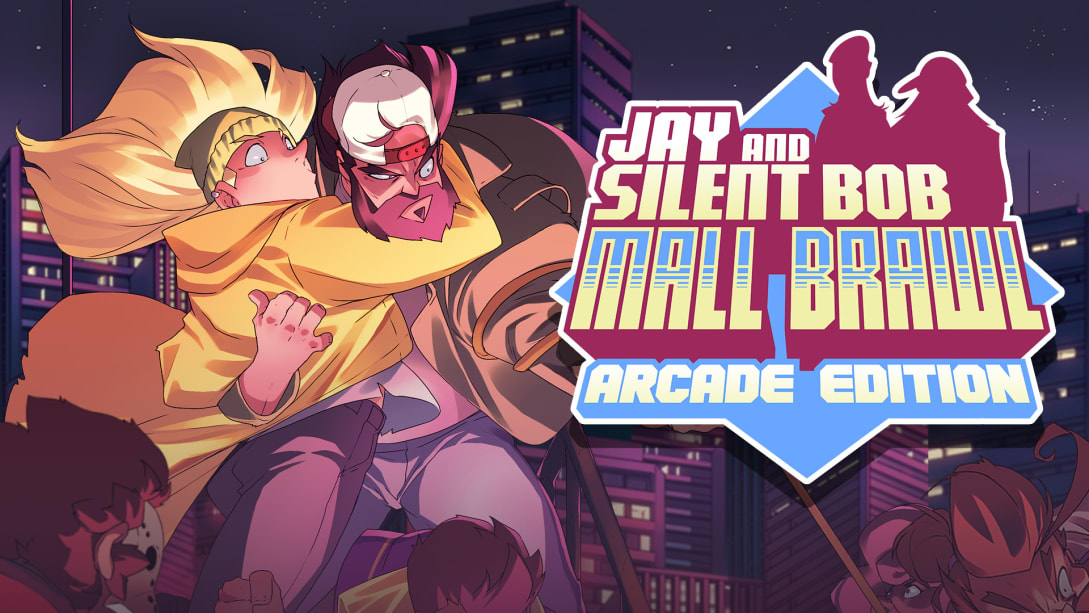 After being hired to sabotage a tv show filmed in the mall, Jay and Silent Bob must use their hands and fists to fight their way out of the mall and find their way back to the Quickstop.

Jay And Silent Bob Mall Brawl Arcade Edition is an 8-bit retro beat’em up where players will navigate mall-inspired levels and beat up every enemy in sight. The game is designed in a way that you have to clear enemies before moving forward. Jay and Bob both have a punch, kick and special attack. There’s not much of a difference between both characters aside from the fact that Jay will do a Flash kick-like attack if you combo using the kick button while Bob will do a punch spin attack to close off a combo. You can also pick up weapons that can be used for a limited time. 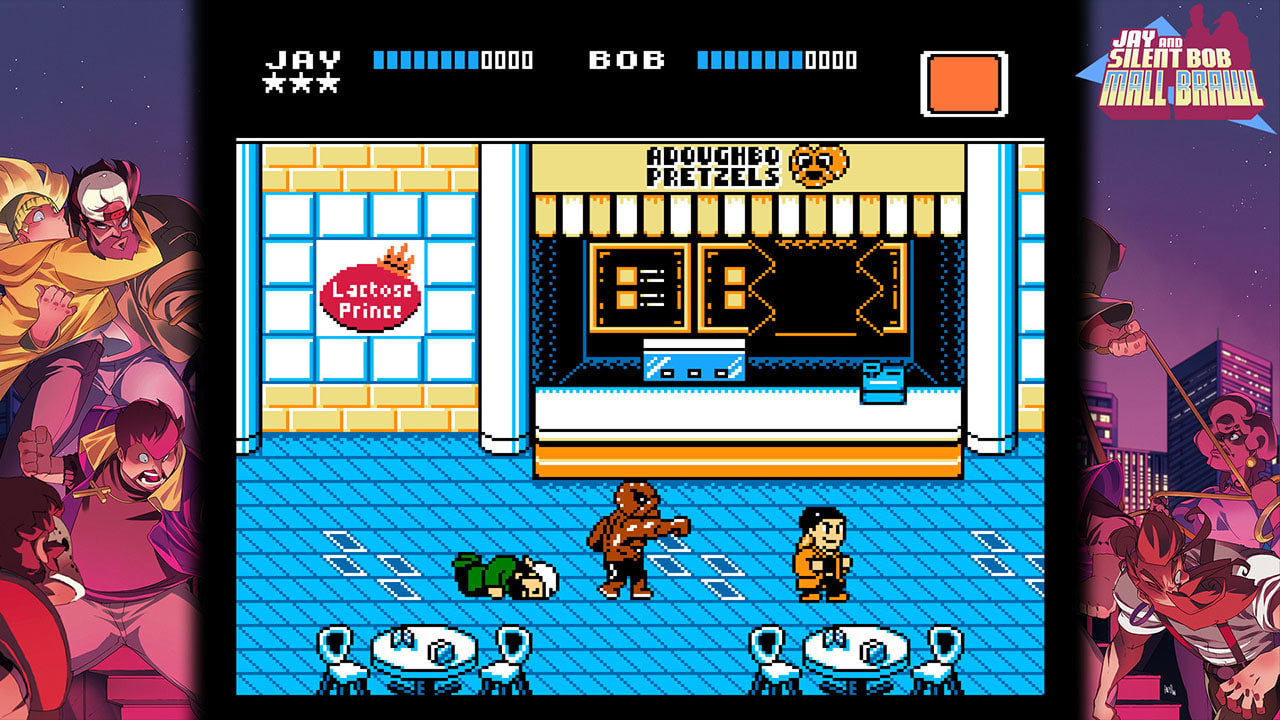 While the game is designed with 2 players in mind, players can still tackle the game solo as they will be able to juggle between both characters. As you beat up enemies and punch or kick through certain destructible items, you’ll be able to pick up items that will replenish your health. And boy will you need it as the game is punishing; like the good old beat ’em of the 16 bit era. If you find yourself surrounded, enemies will pummel you at the same time giving you little to no chance to move out of way while you see your health bar going on empty.

So what happens if Jay or Bob runs out of health? Well the game will automatically swap out the character so you can resume your fighting with the fresher character. In the meantime, the downed character will slowly gain his health back. All you have to do is hold on until you see their health back in blue and then you’ll be able to swap back out if need be. If the knocked-out character’s health remains yellow, they won’t be usable and if both are knocked out, it’s game over and back at the start of the level. 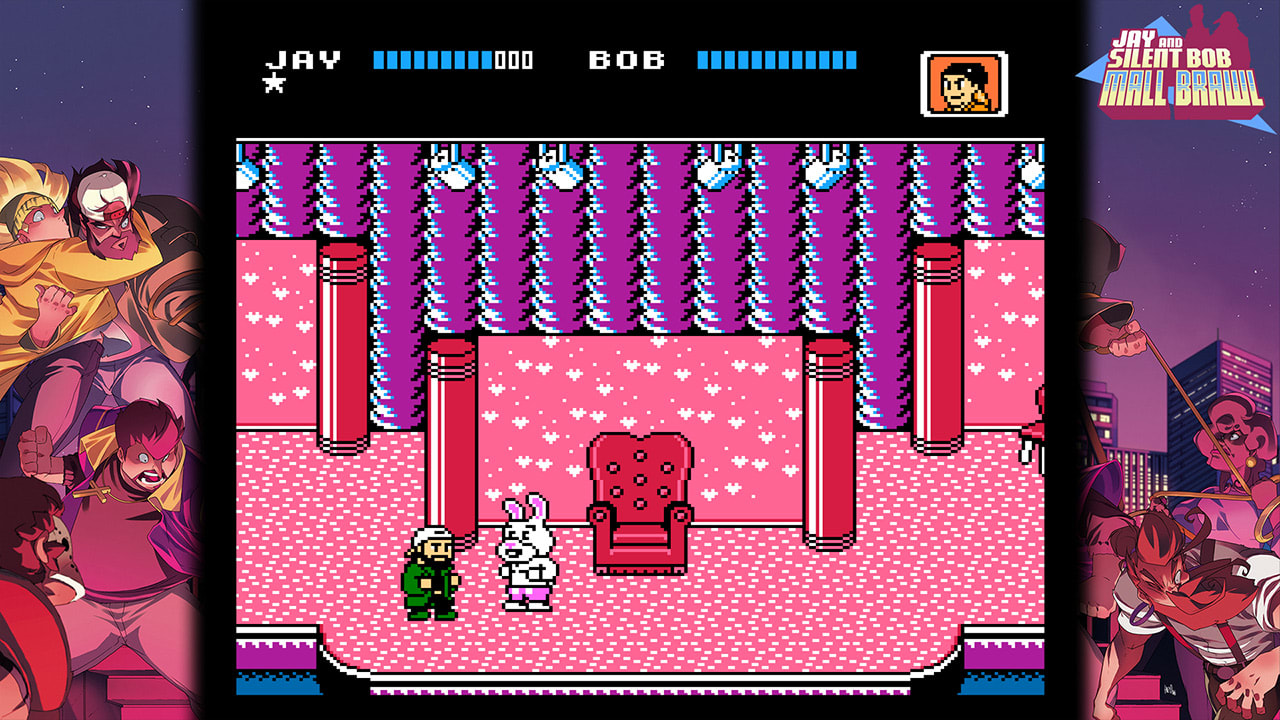 Thankfully to avoid the monotony of beating people up, there is a bit of variety of gameplay that will possibly give PTSD to old school gamers such as myself. Remember Battletoads on the NES? One of the hardest games of that era where a lot of players would be stuck at the Turbo Tunnel level? Well for some ungodly reason, the developers added a similar sequence in Jay & Silent Bob Mall Brawl Arcade Edition. However, instead of avoiding walls and large pits, this game will throw water spill, bananas, bouncing barrels, old grandmas, single mothers with their kids; among other nuisance. And you can’t jump over everything and sometimes the distance to avoid two objects is so narrow, that you barely make it. Each hit takes out 2 life bars and when you lose all your health, it’s back to the last checkpoint. Lose both characters and it’s back at the start of the level. Given that you only have 2 lives (both characters), this is even worse than Battletoads’ Turbo Tunnel.

The game looks great; the 8-bit visual is authentic and it looks (and feel) like the classic NES game River City Ransom. It’s also bright and colorful and it each level is uniquely designed to avoid “visual repetition” despite being set in a mall. Enemy variety is also a strong point; while most of the enemies behave the same way, you’ll have bigger enemies with their own patterns or others with weapons. The soundtrack is an entertaining chiptune score that unfortunately isn’t as memorable as other classics. 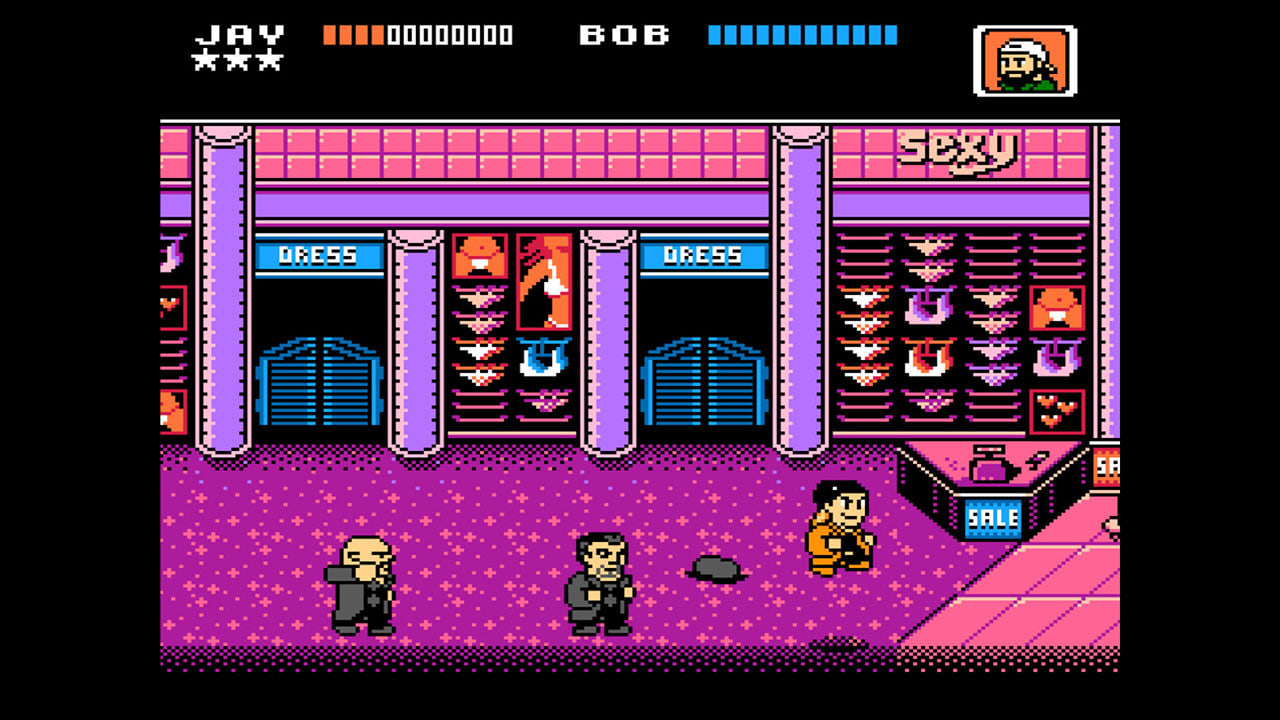 One thing’s for sure, Jay & Silent Bob Mall Brawl Arcade Edition captures the old school 8-bit beat’em up spirit to a tee. Cheap enemy attacks, tough as nails and hair-pulling frustrating sequences. It’s quite polarizing because the fighting is fun and simple, but when it attempts to diversify the gameplay *cough*cart racing through the mall*cough* it kills the fun. If you’re looking for a challenge, definitely pick up Jay & Silent Bob Mall Brawl Arcade Edition; if you’re looking for a more casual, easy-to-pick-up beat’em up, look somewhere else.