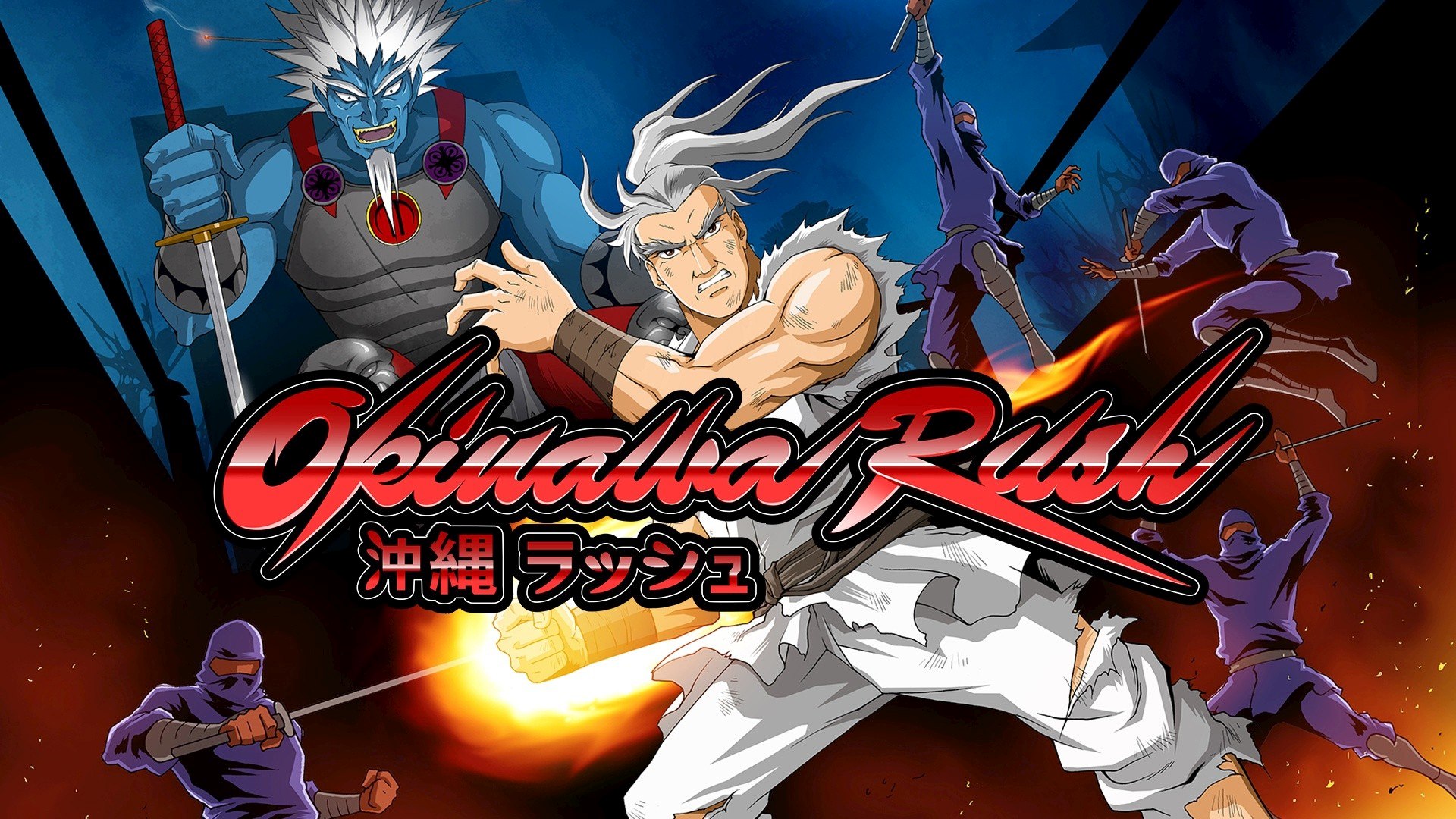 Okinawa Rush tells the story of a trio of heroes, Hiro, Meilin, and Shin as they need to defend Okinawa from the evil Black Mantis Ninja Clan full of ninja and demons. Will you be able to save your fellow countrymen or will the Black Mantis Ninja clan overcome you?

Okinawa Rush plays the same way you’d expect a beat’em up would; you get a weak, strong attack. You can jump around avoiding enemies. You’ll also find various weapons such as nunchakus, staff, swords you can pick up and use to smash your enemies with. To be honest, it’s more efficient than most of your standard attacks. 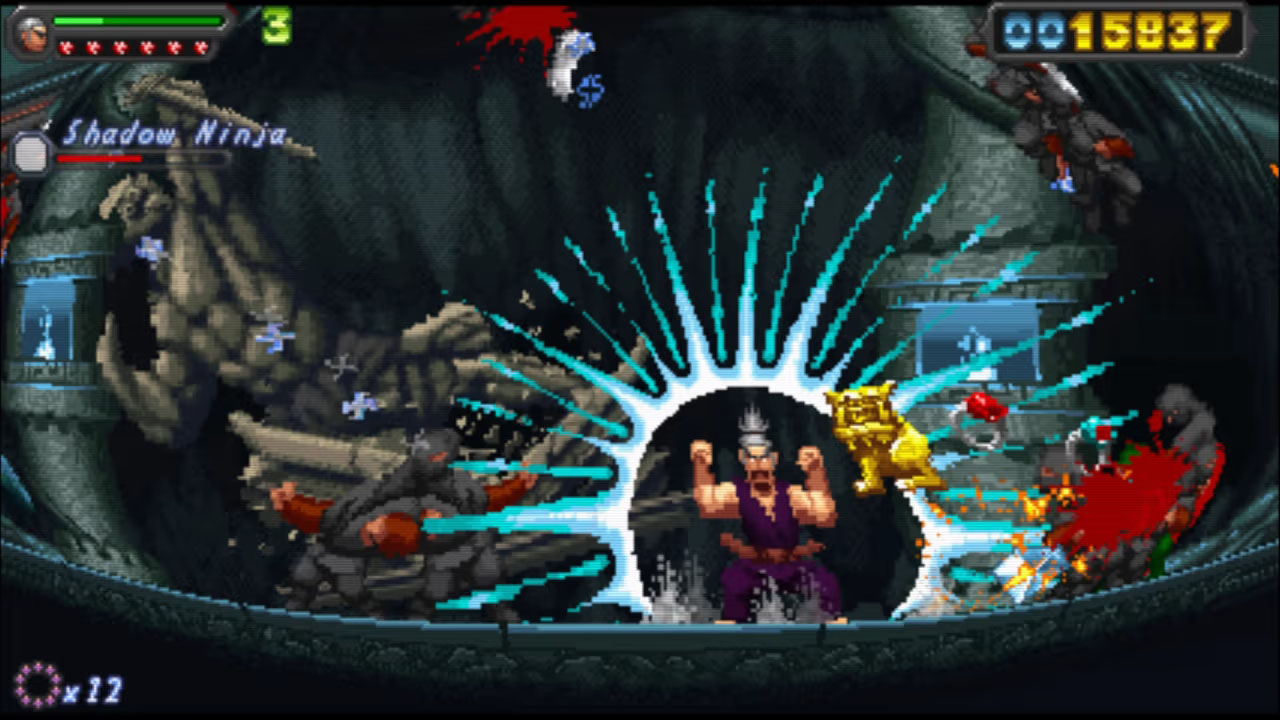 And also our trio of protagonists have a few special attacks that can be used when in a bind (and when your special attack meter is full). For example, Hiro can jump up and down to create a wave of damage against enemies nearby. The training mode allows you to practice and improve Hiro’s stamina for example. Additionally, throughout each level, you’ll be able to find food items that will refill your health.

Thankfully, the game lets players tackle two different modes: Story and Arcade modes. Albeit for some reason, seems like the developers mis-named them. When I first jumped into the story mode, I was expecting, you know to experience the story. But no, you’re thrown into a menu where you can choose between training, survival mode, Rockman Battle (which is only unlocked when you’ve cleared the first level), and Edit Dojo. But jumping into Arcade Mode lets you experience the game’s story. 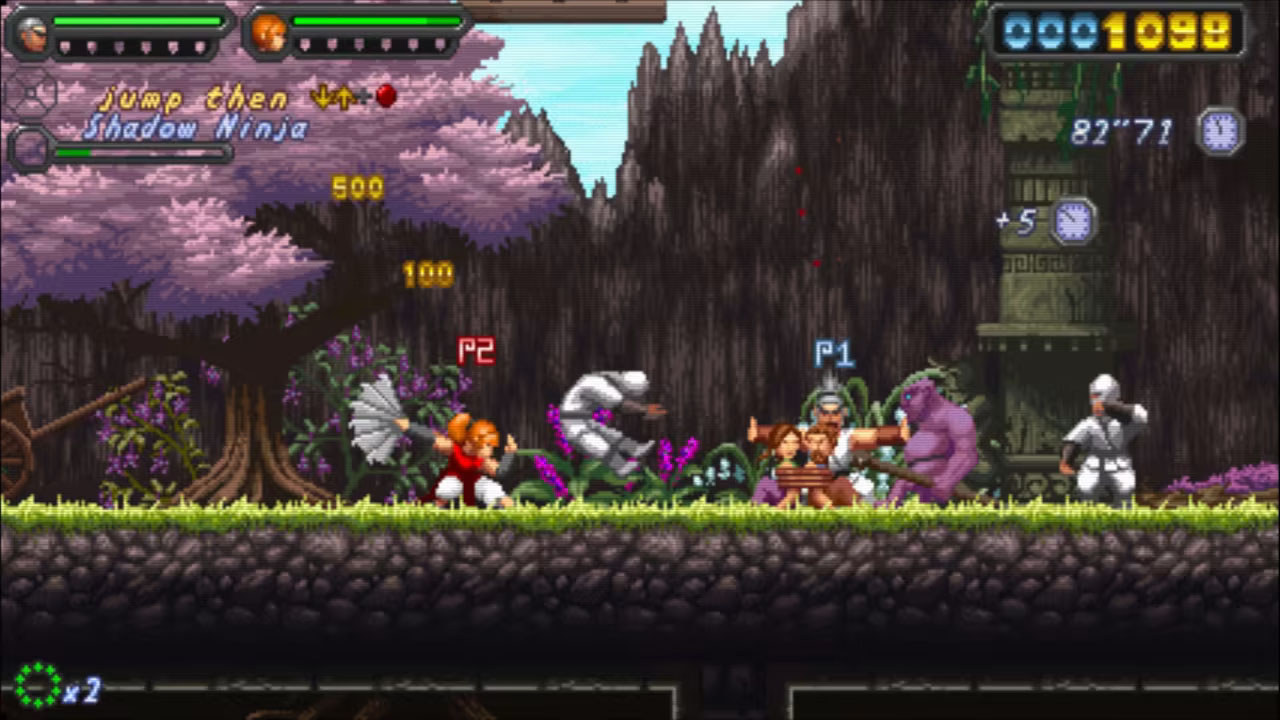 The game has a few lingering issues. First off is the lack of a clear tutorial. While a beat’em up is usually pretty simple and straightforward, the developers are happy to mention that the game includes “an intuitive parrying system” but it does nothing to introduce you to it; unless you tackle the Story mode’s practice mode. Also, the game is quick in overwhelming you with enemies; no matter if you master the parrying mechanic, when 10-15 ninjas are bashing your head in from all sides, the parrying system becomes useless, and all you’ll be able to do and watch your health bar go from full to empty before you can say bullsh*t.

I love the game’s 8-bit/NES era-like visuals; reminds me of a simpler time. Levels are well designed and stand out from one another. There’s also a decent variety of enemy designs as well. Animations are well done and it can be funny at times seeing characters punched across the area and smash into a wall. The soundtrack clearly has some Japanese inspiration, but it’s just an annoying score that sounds like it’s playing at twice the speed it should.

Is Okinawa Rush fun? Yes. Beat’em up, as a whole, are always a good time because what can go wrong when you’re just punching your way through endless waves of enemies. Is it fair? Not really. The whole concept is fun and there are interesting innovations, but unfortunately, it ends up a frustrating mess, especially because of the parrying system. It’s fun when it’s against a fair number of enemies, but once you get 15-20 enemies at once, it’s utterly useless and will cause frustrating deaths. Given the amount of (fair) beat’em ups available, this is a pass.