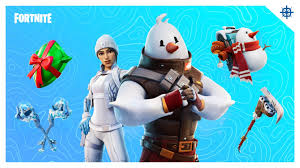 ‘Tis the first day of Snowdown, when all through the tundra were Snowmando Outposts full of loot and decor.

Remember Crackshot’s Winterfest last year in Fortnite? This year, Crackshot’s right-hand snowman, Snowmando, has arrived to the island to continue his benevolent legacy. From December 18 (now!) until January 5, play in Operation Snowdown to unlock free Locker items — including two free outfits — and enjoy some gameplay throwbacks as a gift to the community!

In Operation Snowdown, you’ll be joining Snowmando on the cold frontlines: complete his new quests over the course of the event to unlock rewards like the ice-skating inspired Toe Pick pickaxe, the perfectly-wrapped Shield Surprise back bling, as well as gliders, wraps, another pickaxe and back bling, and more.

Completing nine Operation Snowdown quests will unlock Snowmando’s outfit, and completing 12 will unlock the Frost Squad outfit – inspired by the unclad tree branches of winter. Both of these outfits are free!

Having many battles in his past, Snowmando snows how to have a good time. For Operation Snowdown, he’s brought in his custom X-4 Stormwings, allowing you to become a plane pilot in Fortnite once again!

Snowmando’s also brought in his Sneaky Snowmando props, allowing you to disguise yourself as an ordinary snowman, as well as his cold feet-giving Chiller Grenades and loot-filled Presents! throwables.

Operation Snowdown not only features a rotation of returning limited time modes but also the Snowdown Shuffle, a playlist that’ll put you in a Snowdown LTM at random. And yes, with planes making their return, one of these LTMs is fan-favorite Air Royale!

There’s also a brand new LTM in the mix: in the new Shockwave mode, players must compete to knock opponents into the (extra-strong) storm as it shrinks down to nothing. And if you missed the Pickaxe Frenzy tournament from a couple months back (or just want more of it), you can play Pickaxe Frenzy in its first-time LTM form.

During this event, we hope you enjoy Snowmando’s quests, the return of planes and past LTMs, and the new and returning holiday outfits. Have a holly Snowdown and New Year, thanks for being awesome, and we’ll see you in 2021!