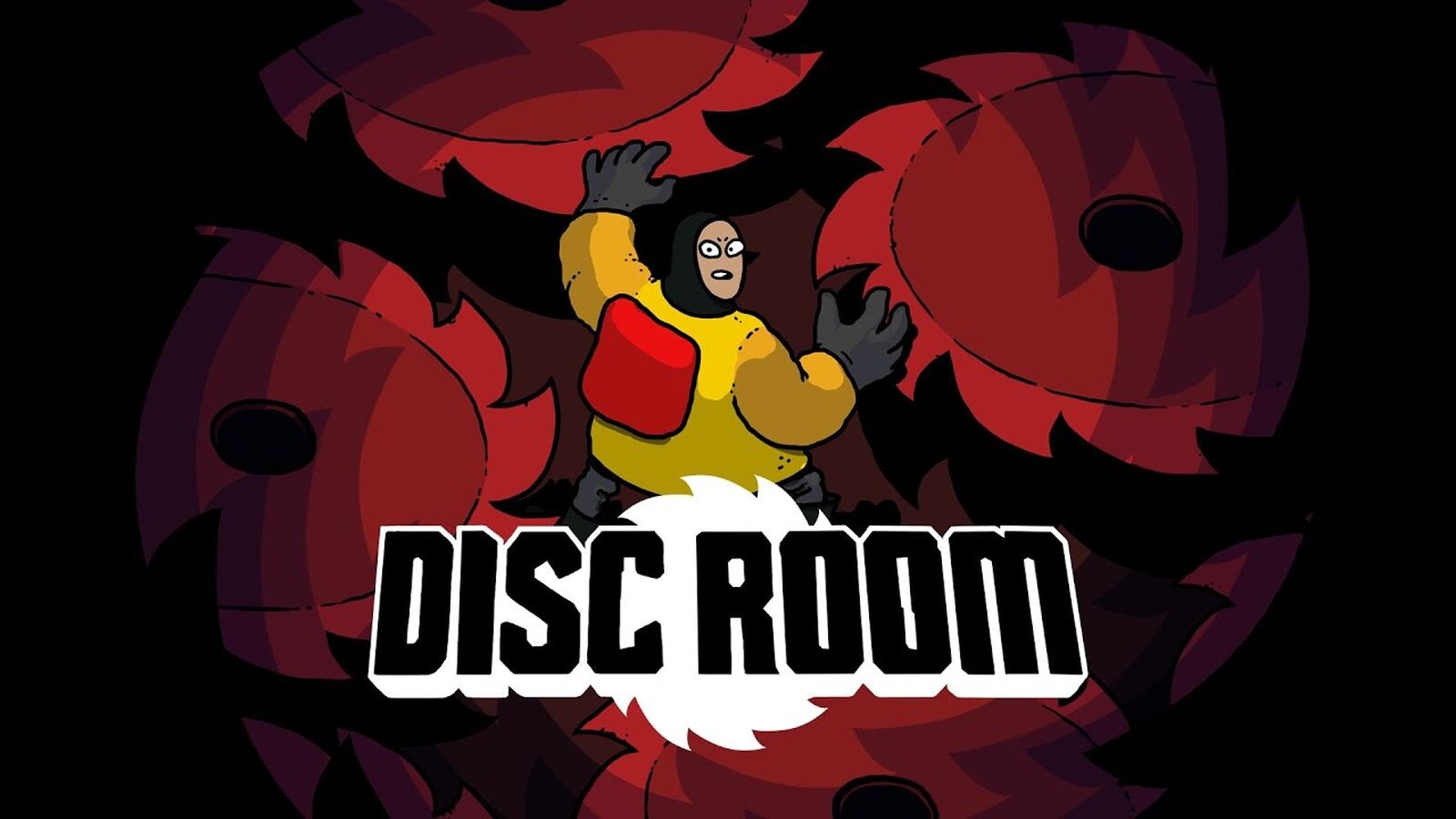 Have you ever played a game that has been super enjoyable yet infuriating at the same time? There are plenty of titles that give you that “one more go” feel, the Geometry Wars duo instantly spring to mind. Disc Room is the latest experience to launch from publisher Devolver Digital and has joined the Xbox Game Pass roster on launch. Developed by just a team of four who deserve to be named in this review are as follows, Kitty Calis, Jan Willem Nijman, Terri Vellmann and Doseone. This game is a prime example of why Xbox Game Pass works so well as I divulged into this experience and literally could not put my controller down due to its absorbing and enthralling nature. It may bring out your inner rage, but I can assure you that it is definitely worth downloading and trying. Prepare to be slaughtered and sliced to smithereens on countless occasions. 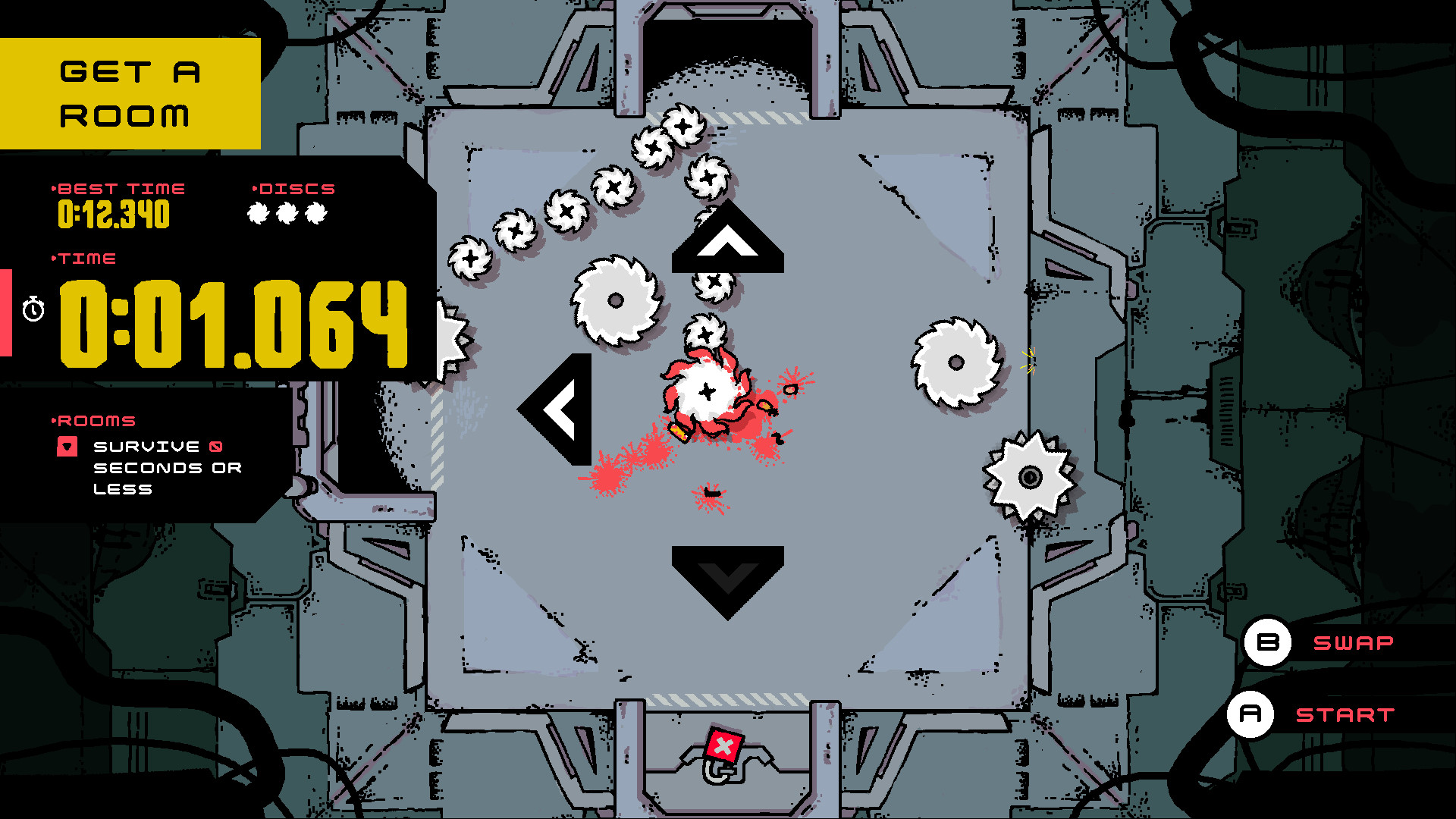 Introduction – Get a Room

The premise of Disc Room is very simple, traverse through several rooms on offer and attempt to remain alive as long as you possibly can. Circular saw blades (known as discs) sporadically and spontaneously revolve around each room and you must avoid them. Let one of them touch you and splat, instant death. Once you die, the run is finished and you must start all over again if you choose to do so. Each room has a leaderboard with your friends’ scores and also the developer record. This is a constant reminder of becoming a better you and to ensure that you strive to achieve the highest survival time possible.

Adjacent rooms are locked shut until you tick off some of the challenges on display for the room you currently occupy. This could be something simple such as surviving for a certain number of seconds or remaining in the room until more discs pop in. Whilst the idea and concept are so basic in ideology, it is so well executed. 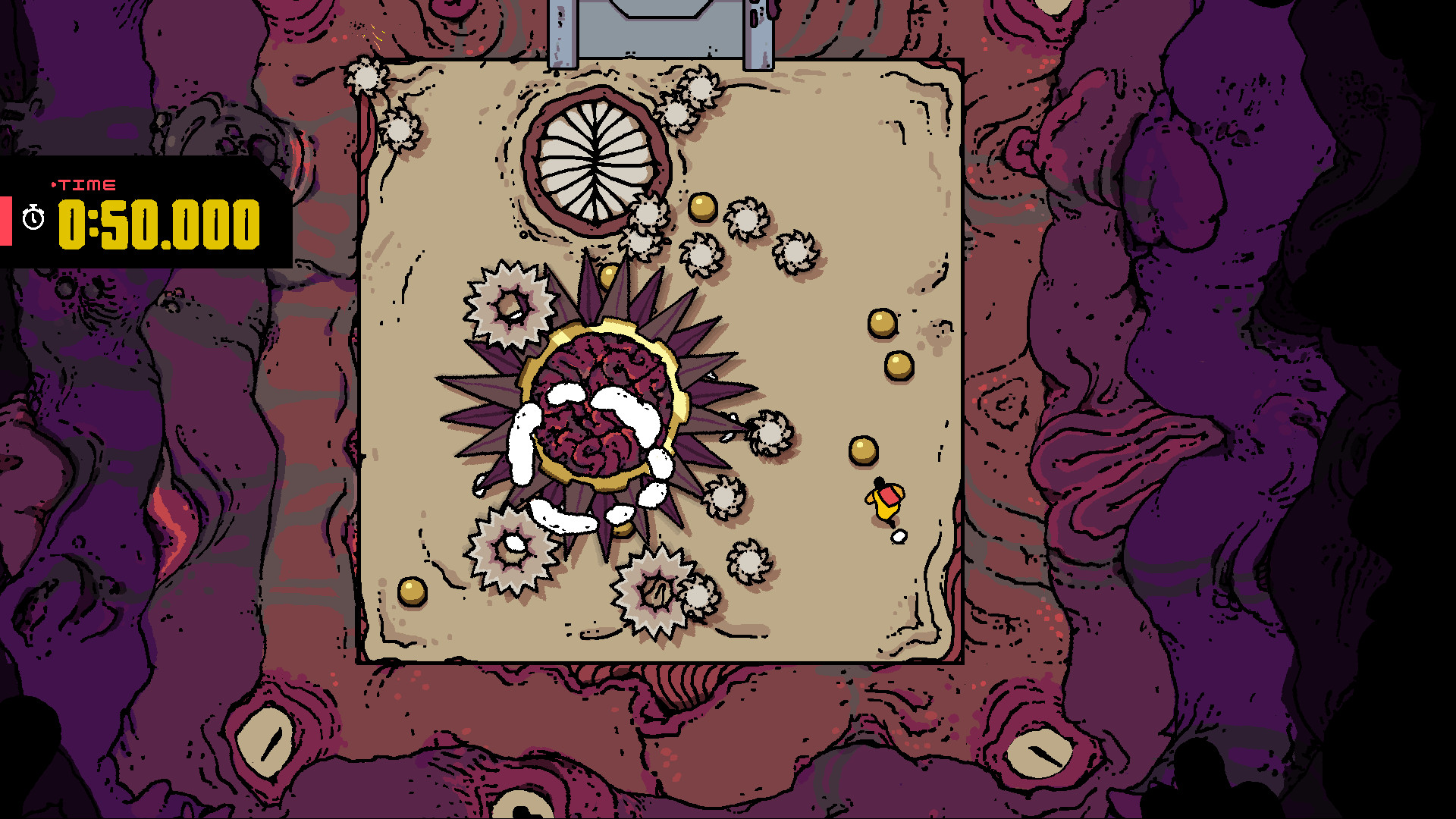 Gameplay – You can run, but you can’t hide

There isn’t much to learn in the way of controls and even the most casual of gamers could pick up and play this. Use the left analogue stick to navigate around each room. The A button will make use of whatever power-up you currently have activated. These are obtained as you progress and can be used in an attempt to extend your run behind each deathly door. Some examples are recreating a clone of yourself to trick the blades or absorbing a closeby blade to avoid certain death. After you’ve had enough of a room and you’ve unlocked the next you can choose to move on to the next to try and conquer the leaderboards once more.

In between the standard rooms of obliteration, you also have bosses to take on and defeat. These range and vary in size but often take up a sizeable chunk of the room, so you have to be quick, nimble and precise to achieve your goal. What I really loved was not knowing what the next room was going to entail. It could be a case of simply dodging the rotating blades consistently spinning towards you, standing on a platform in the middle to make the clock tick or collecting little yellow balls to run the clock up or down. You’ll have moments which are played in pitch darkness, dim light and just a small circle of illumination surrounding you. The team have done a magnificent job of always keeping players on their toes with the diversity in level design. 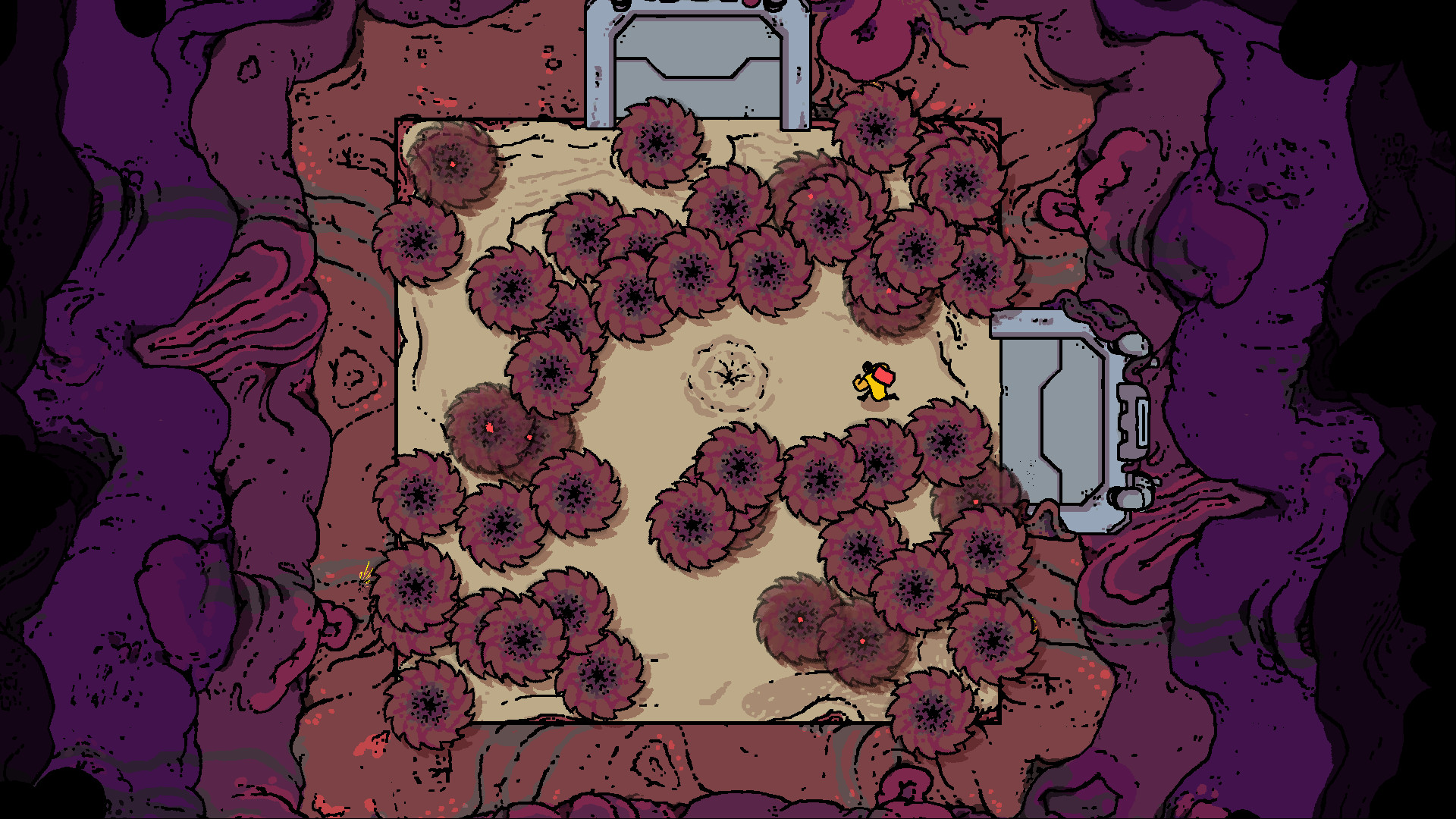 Visually Disc Room portrays itself with the excellent illustration. Everything on the screen is displayed with a warmth of colour and looks to me as if a lot of it was hand-drawn. The development team have done a great job in the design of all the rooms, with nothing appearing to be repetitive and plenty of variance in the range of discs. Observing the plan of different rooms between plays was easy to follow and understand. Rooms that hadn’t been visited had a question mark inside and blocked-off rooms were indicated in red. Bosses were well constructed and gave off the feeling that they were gigantic in comparison to the little guy in the space suit.

The audio was perfectly fine with some intense music filtering through to compliment the high-adrenaline gameplay loop. I would have loved to hear some sound effects for the discs though this may have overpowered the overall atmosphere and could possibly have made it irritating. 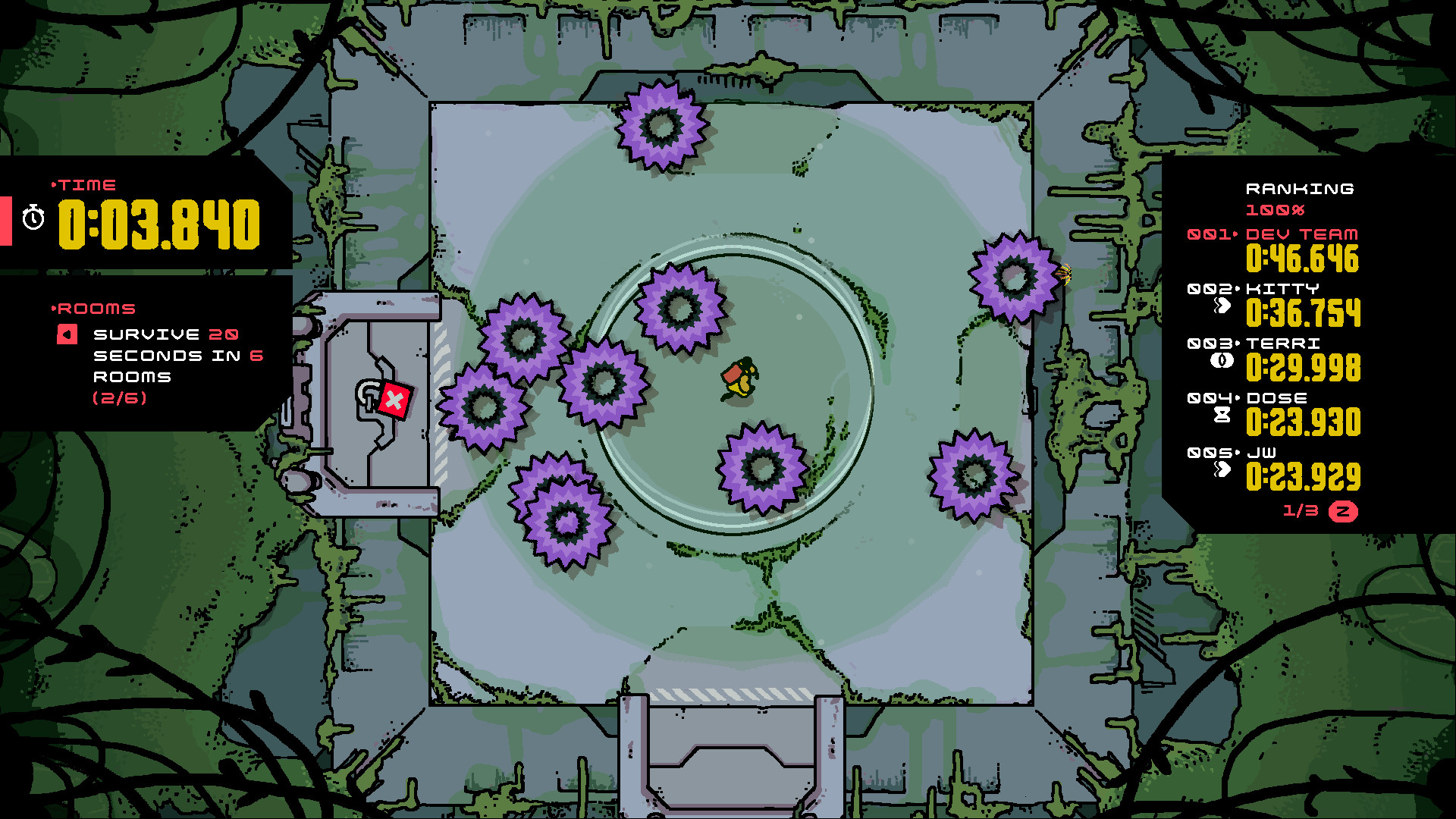 Disc Room is not a game that should be overlooked, especially if you have an Xbox Game Pass subscription, then you have no excuse to not give it a go. No matter how many attempts I had at several of the rooms and how much it was making me frustrated, it spurred me on to keep playing over and over again. The gameplay is consistently moreish and before you know it, minutes have turned to hours. It is punishing yet satisfying in the same breath and I’d even go as far as to recommend that you purchase this if you love a real challenge. Replayability and longevity are there if you want to keep beating your friends’ scores and go for the all-time high of overtaking the developers. I’d love to see some additional rooms added in future and the potential for online multiplayer is there in my opinion along with some global leaderboards. Overall though, an incredibly worthwhile and pleasurable investment of anyone’s time and joins my must-play titles of 2022 for sure.