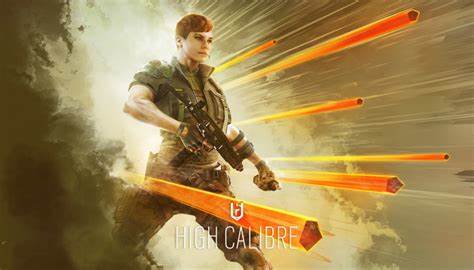 Discover Thorn, The New Irish Operator, A Rework Of The Outback Map Amongst Many Updates.

Today, Ubisoft® announced that High Calibre, the fourth and final season of the Tom Clancy’s Rainbow Six Siege Year 6, is now available on PlayStation®4, PlayStation®5, the Xbox One family of consoles, Xbox Series X | S, Windows PC, including Ubisoft+, Ubisoft’s subscription service* and Stadia. This new season brings new updates with the addition of the Irish operator Thorn, the rework of the map Outback, new default colours of the teams, and a new Battle Pass featuring a new exotic weapon skin, amongst other updates.

In High Calibre, players will discover a brand-new defender: Thorn, equipped with the Razorbloom Shell: a throwable proximity device that once triggered initiate a timed blast. If an enemy player doesn’t get out of the area of effect on time, they will receive damage at the end of the fuse timer. Thorn is a medium speed, medium armour Operator, and her loadout consists of the new custom made UZK50Gi or the M870 as primary weapons and the 1911 TACOPS or the C75-AUTO as secondary weapons.

In addition, the Outback map has been rebuilt to improve balancing and player comfort. Both the main building and its exterior have been tweaked to allow Attackers to create and execute more effective strategies. In addition, new exterior soft walls have been added to the building, and some areas have been refurbished and cleaned up to remove junk and provide better lines of sight and balance.

Year 6 Season 4 comes with a brand-new Battle Pass, including 100 tiers and 131 rewards, available until 21st February 2022. The Battle Pass includes a free and a Premium track available for 1200 R6 Credits. Owners of the Premium Battle Pass can play as Thorn immediately and progress faster, while other players can unlock her with Renown or R6 Credits starting 14th December 2021. New seasonal content including the Outback rework, new default team colors, new HUD and operator updates are available right now for free and for all players.

Rainbow Six Siege will be available for free from Thursday, 2nd December to Monday, 6th December on Playstation®4, Playstation®5, Xbox One, Xbox Series X | S, and Windows PC on the Epic Games Store and Ubisoft Connect. Players will also benefit from a discount up to 70% during this period, depending on the platform and version of the game. For more information, please visit: http://rainbow6.com/freeweekend

*Ubisoft+ is £12.99 per month. Cancel anytime. More information at ubisoftplus.com.

About Tom Clancy’s Rainbow Six Siege
Alongside a thriving professional esports scene and a community of over 75 million registered players, Tom Clancy’s Rainbow Six Siege puts players in the middle of a fast-paced, ever-evolving multiplayer experience grounded in the selection of unique operators. Using the right mix of tactics and destruction, Rainbow Six teams engage their enemies in sieges, where both sides have exclusive skills and gadgets at their disposal. Defenders prepare by transforming the environments around them into modern strongholds, while attackers use recon drones to gain intel for carefully planning their assault. With access to dozens of operators inspired by real-world counterintelligence agents from around the globe, players can choose exactly how they want to approach each challenge they encounter. Through the constant addition of new operators and maps that add to the depth of both strategy and combat, the unpredictability of each round of Tom Clancy’s Rainbow Six Siege sets a new bar for intensity and competition in gaming.