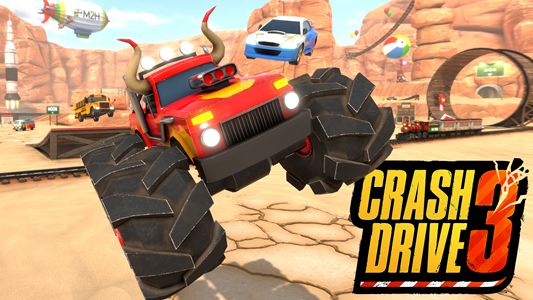 Insane stunts in a crazy open world – play solo or with friends on any combo of platforms!

Crash Drive 3 hits the road with a simultaneous release on 9 platforms with complete cross-play between them all! Car stunt driving game Crash Drive 3 is multiplayer and multi-platform – gamers on PC, consoles and mobile devices can all race, stunt, compete and explore a colorful open world alone or together in Crash Drive 3! The crazier the better – perform incredible stunts, customize your car (or truck or tank!), compete in a variety of fun games, or just goof off and hunt for secrets.Crash Drive 3 released on Steam and Epic Games Store for PC, PlayStation 4 & 5, Xbox One & Xbox Series X|S, and Nintendo Switch, as well as iOS and Android devices!

Race, explore, stunt, crash… Crash Drive 3 has it all!

Take the wheel and experience ridiculous fun in this cross-platform multiplayer, free-roaming game! Drive crazy vehicles including monster trucks, tanks, and more across a huge open world. Play online or in a fully featured single player. Level up, play events, earn cash, unlock new cars and discover secrets… Crash Drive 3 has everything fans loved in Crash Drive 2, turned up to 11 and with full cross-platform play between 9 different platforms – all releasing on the same day just as the fans desire!
There are five different areas of a huge open world to explore, with a variety of frequent competitive events that everyone in-game can join. Whether it’s a game of cops and robbers, attempting to tag the most scenery with stunts, or destroying a giant beach ball, it’s sure to be a wild time! There are even airborne tank battles to discover… and if you just want to ignore all that and goof around, that’s fine too!
Multiplayer and multi-platform!
The best part is that you can do it all with friends, no matter what platform they game on. It was quite a stunt to pull off a simultaneous release on 9 platforms with full cross-play, but we did it! That’s right, there’s full cross-play across every platform, from PC and consoles to mobile and Nintendo Switch! Whatever platform they’re using, you can jump online and race with your friends! The varied world of Crash Drive 3 is open for you to drive where you want and make your own road! M2H co-founder Mike Hergaarden said: “The Crash Drive community has been hyped for the new game, and we knew we had to give them a simultaneous 9 platform release with full cross-play so that nobody would be left out of the launch day excitement! It was no small task, but we’re proud that every Crash Drive fan will be able to play together on day one, whether they’re PC, console, or mobile gamers!”.
From scenic forest castles to the wild west and even the moon, every region of the world is packed with stunt opportunities, decorative details, and secrets to discover. Earn cash for new rides and upgrades as you play in any way you like – whether it’s joining events or just exploring and pulling the craziest stunts you can, you’ll be well on your way to upgrading and unlocking new rides! Use your winnings to buy funky antennas, license plates, and more. If you reach the max level, you can even show off with a solid gold car!
So what are you waiting for? Hit the gas and have a blast in Crash Drive 3!