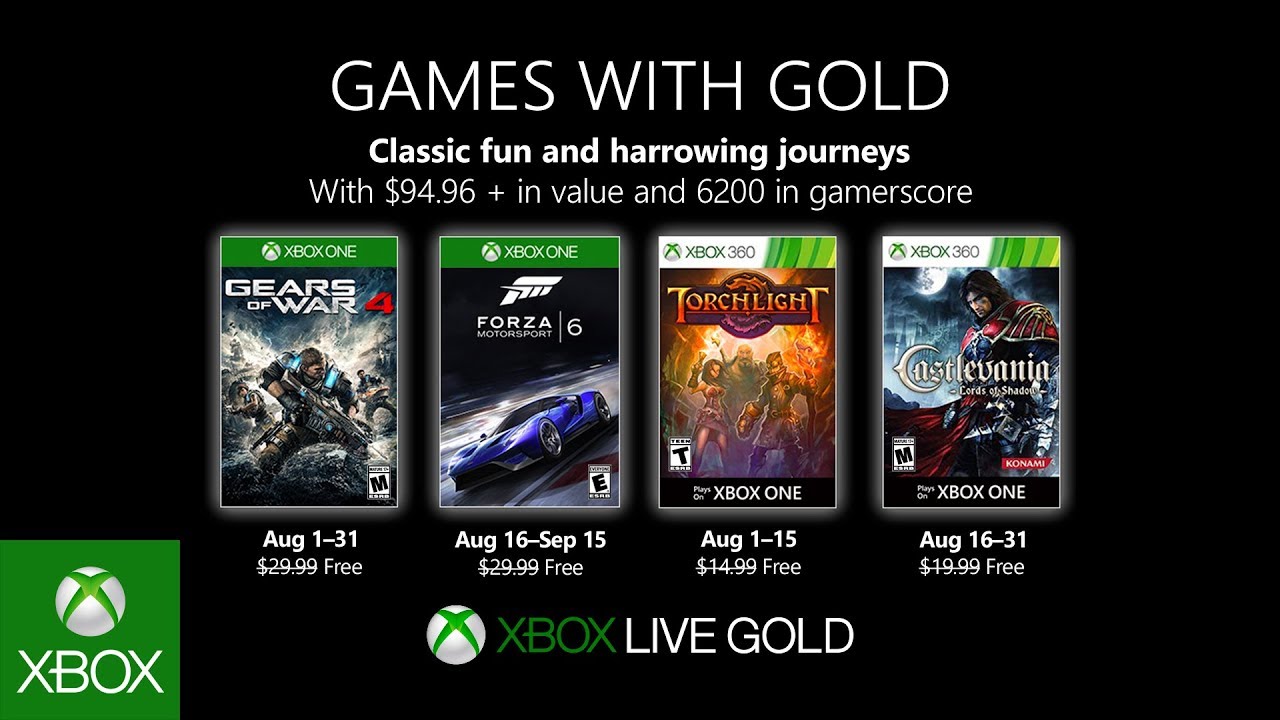 This August, why not take the fight against the monstrous Swarm in Gears Of War 4, and then sit back and get behind the wheel, as you put the pedal to the metal and join the thrills of racing around some awesome tracks from around the world in Forza Motorsport 6.

On Xbox 360, and Xbox One via backward compat, take the chance to explore those dangerous dungeons in Torchlight, and finally later on in the month prepare to do battle with fearsome beasts in Castlevania: Lords of Shadow.

All games will be available exclusively for Xbox Live Gold members for a limited time as part of Games with Gold.

Now’s your chance to get ready for Gears 5  by playing as JD, Kait, and Del in their first adventure. In Gears of War 4, the squad must discover the source of a terrifying new enemy and rescue their loved ones after escaping an attack on their village. After defeating the Swarm in the campaign, don’t forget to check out Horde and Versus multiplayer. As part of the road to Gears 5, completing achievements and challenges in all three modes can earn you rewards and character skins that you can take with you into Gears 5. Once you’ve mastered the Swarm, you’ll be ready to continue Kait’s story when Gears 5 launches on September 10 with Xbox Game Pass on Xbox One and Windows 10.

One of the most comprehensive racing games of this generation comes your way in Forza Motorsport 6. Start your engines and compete against 24-players, day or night in all weather conditions. Customise and race over 450 Forzavista cars at realistic simulation speeds across 26 world-famous locales, and with the included Ten Year Anniversary Pack enjoy an additional 10 exotic cars all tuned to the top of their class. With unrelenting action and breathtaking visuals, master the road and race your way to victory.

Can you uncover the secrets buried beneath Torchlight? Developed by the creators of Diablo and Fate, choose among three separate character classes: Destroyer, Alchemist, or Vanquisher and seek adventure through randomised dungeon levels. Slay hordes of monsters, learn devastating skills, and loot endless treasure in this thrilling action-role playing title. Play Torchlight now before its sequel Torchlight II makes its way onto Xbox One September 3!

Play the role of Gabriel in Castlevania: Lords of Shadow. Raised by the Brotherhood of Light, begin your quest across a destroyed world to defeat the three factions of the Lords of Shadow and end their unholy rule. With your devastating Combat Cross, take revenge on those who took your fallen beloved and attempt to bring balance back to the world.