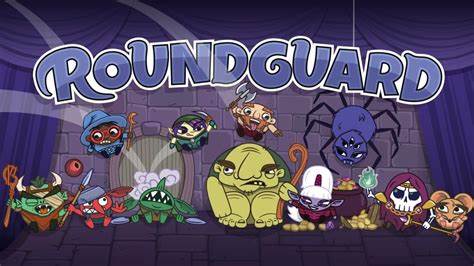 Wonderbelly Games and The Quantum Astrophysicists Guild are thrilled to announce the big Encore Update for Peggle-like rogue-like Roundguard is out now on Switch, Xbox, and PlayStation! This huge expansion gives each character their own series of escalating Encore ranks to explore and adds tons of new gameplay variety and new rewards to unlock.

The new Encore Mode for each hero adds a whole new type of gameplay with more boss variants and hero ranks to push players to their limits as they climb the leaderboards. In addition, a Wheel of Woes, new relics, new achievements, and new accessibility settings (including Arachnophobia Mode) have been added.

What the Press are Saying:
– “Wondrous alchemy…” – Daniel Tack, Game Informer
– “Like Peggle had a baby with Diablo! It’s an awesome dungeon-balling adventure!” – Jason Kapalka, Co-Founder of PopCap
– “As soon as my hit points ran out, I eagerly cued up my next character’s run… the Peggle formula is so enjoyable that it’s hard to believe we haven’t seen more attempts at this kind of translation into a roguelike structure.” – Matt Miller, Game Informer
– “In Roundguard, you collect gold by breaking pots, burn mana to use special moves, grab equipment for passive bonuses, probably skip your next two meals, and eventually pass out at your keyboard at 1 a.m. . . . If they bring it to mobile devices, human civilization as we know it is in danger.” – Thomas Wilde, GeekWire