I think we are into the swing of the new year at Completexbox, and CX readers may have noticed a few different feature posts at the start of 2022. We hope you’re enjoying them, after all – gamers like you are the reason we provide the content, and you always come first in our book.

Welcome to Snapshot, in a nutshell – Snapshot is a little feature that provides a snapshot of information on a game that we have checked out or have been playing recently. The article will be packed with screenshots, and a general overview of our opinion of the game without review score.

Having spent the last few months chatting away to the gaming community, Developers, publishers, and PR companies alike, I have come to the conclusion that whilst game reviews are important, and we will always continue to provide them at Completexbox, they are not always the be all and end all.

Sometimes people just want a snapshot of a games make up and what it has to offer, so that they can decide for themselves, and out of this research Snapshot was born.

Next up for the Snapshot treatment… 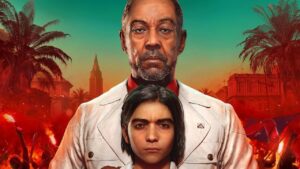 Welcome to Yara, a tropical paradise frozen in time. As the dictator of Yara, Anton Castillo is intent on restoring his nation back to its former glory by any means, with his son, Diego, following in his bloody footsteps. Their oppressive rule has ignited a revolution.

Play as Dani Rojas, a local Yaran, as you fight alongside a modern-day guerrilla revolution to liberate Yara! 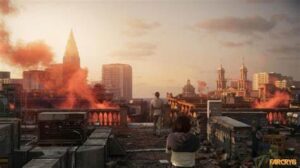 Anyone that knows me, knows that I absolutely adore the Far Cry Series. Far Cry games always provide the perfect playground for over the top madness. There’s a compelling story flowing throughout the game, that capture’s your imagination and immerses you into the tropical world of Yara. With Far cry 6 you can easily get lost in the side missions, and the exploration of the beautiful landscapes that this stunning gaming island has to offer. 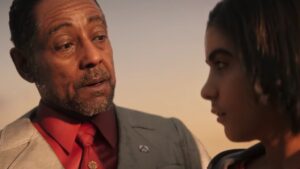 Playing as Dani, you get to fight against Castillo’s regime in the most expansive Far Cry to date, through jungles, beaches and Esperanza, the capital city of Yara. Throughout your journey, as with all far cry games, there’s a whole arsenal of resolver weapons, backpacks, and vehicles to help you on your way to take down the ruthless regime of Castillo 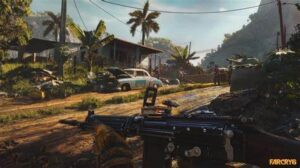 An island nation is in the grip of a brutal tyrant. Unrest simmers on the streets of the capital city, and escalating tensions will soon boil over into full-on revolution. This is Far Cry 6,  casting you in the role of a freedom fighter. As you struggle for the liberation of your homeland, Yara, there is one man above all who stands in your way: Antón Castillo. Portrayed by Emmy Award Nominee Giancarlo Esposito (“Better Call Saul,” “The Boys,” “The Mandalorian”), Castillo joins the ranks of such legendary Far Cry villains as Vaas, Pagan Min, and Joseph Seed as he promises to return the people of Yara to their former glory. But at what cost? 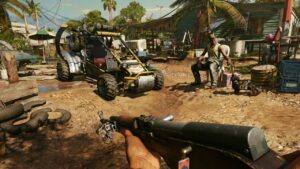 A pretty high cost, as it turns out. Castillo’s army is running roughshod over the populace, and the violence clashes starkly with the serene Caribbean waters, pristine beaches, and rich tropical forests of Yara. Your guerrilla campaign will sweep across the island, from the rural farmlands to the streets of Esperanza, the franchise’s first urban environment to date. And you won’t be fighting alone; many of the people and animals who call Yara home are fed up with Castillo’s reign and would do anything to stop him from grooming his son, Diego (played by Anthony Gonzalez of “Coco”), to take over his regime. With a powerful array of weapons, vehicles, and allies behind you — including Chorizo, the dangerously distracting wiener dog — Castillo is in for a fight. 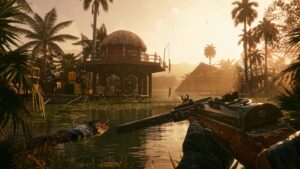 Set in Yara, a tropical paradise frozen in time in the heart of the Caribbean, players will experience the adrenaline rush and chaos of guerrilla combat as they join the revolution to liberate Yaran people from the oppressive rule of dictator Antón Castillo and his teenage son Diego.

Far Cry 6 features a broad and unexpected arsenal of customisable “resolver” weapons and tools. From a motorcycle engine powered minigun to a homing missile throwing backpack, pushing the “resolver” spirit to the limit will grant Dani the power of an entire guerrilla army. 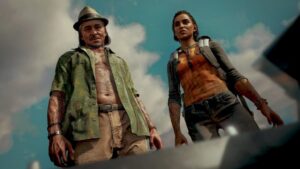 Players will be able to pick traditional weapons and use new ways to traverse the world such as horses, tanks and crazy DIY vehicles. They will also be able to pair up with all-new animal companions like Chorizo, the adorable sausage dog or Guapo, Juan’s hungry pet crocodile.

In solo or two-player co-op, players will explore a vast and contrasted open world, from lush jungles to decaying cities. With Antón’s army controlling the air, roads, and seas, players will operate from hidden guerrilla camps across the country, gathering soldiers and resources while planning their next move. Players will have to navigate the world and approach situations like true guerrilla fighters to make sure every strike against the regime hits hard. 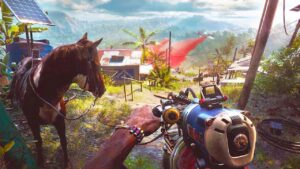 Far Cry 6 is stunning, it’s everything you could want from a Far Cry game. It takes the best bits from all the previous games, mashes them all up, and adds that something more.

Employing the Open World, side missions, formula – The story and main missions are amazing, and you really do feel like you’re joining the fight for freedom, as you take hold of all the weapons at your disposal and really take it to the oppressive forces at work against you.

The world is absolutely gorgeous, and while some say it doesn’t offer anything new in terms of it being a Far Cry game, I ask what more do you want and expect from such a game?

One thing’s for sure with the Far Cry series, it always deliver’s and leaves you wanting more at the end of the experience, and that’s exactly the same for Far Cry 6