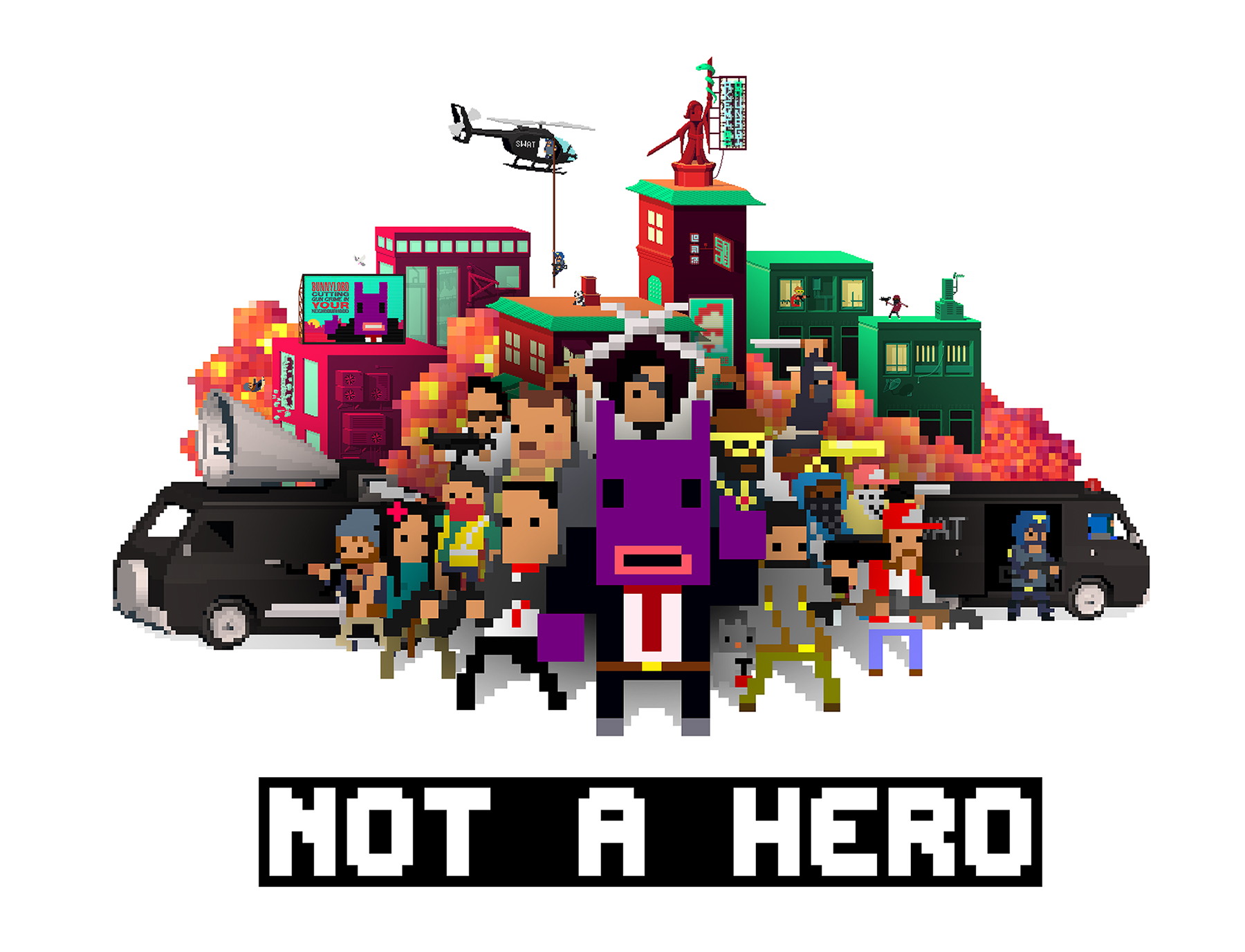 I’ve played my fair share of platformers, all of which vary in difficulty and the level of frustration they can leave you with. Luckily, Not A Hero: Super Snazzy Edition is one of the nicer titles, which keeps levels feeling refreshing and challenging at the same time, without leaving you with that red-faced, steam coming out of your ears kind of feeling.

One of the standout features in the game has to be its choice of characters, as they all have their own personalities and lines they use throughout each level. You might pop an enemy in the head and hear one of their many lines, but it all feels very comical with the direction of the game. Sure there’s an objective to every level like rescuing so many hostages or just escaping the level, but there’s always a twist which will make you snigger or laugh out loud. It was a breath of fresh air to see a level broken up in that way, as a lot of platformers don’t do this.

What I love most about the game is its mix of run and gun gameplay combined with the cover shooting. Double tapping A and you’ll dart into cover behind an object, which will protect you from any fire. As soon as you go to shoot, you’ll expose yourself to them making yourself vulnerable or they might rush you and knock you out of cover.

Then there’s the level design itself, very often or not you would find paths like an exit out of a glass window down onto a ledge, a useful way to get to a collectible or around a set of enemies. In the end it became a run of trial and error and seeing which paths took you where. Choice is important in most games today and that was definitely something strong throughout this game – very often or not, I would restart a level just to save an extra hostage.

There are also multiple ways to completing each level and for the completionist, there are objectives which can be fully achieved or only partially to complete the level. It was nice to see objectives push those who want to complete the levels fully rather than do a half-hearted job like I probably did most of the time. Nonetheless, levels can be challenging at times and I did find myself getting a little too mad at myself for pushing A too many times or rolling out of a window to my death.

I guess another highlight of the game is its new playable character the purple mayor candidate BunnyLord, in which you can play as this funny guy across 3 new exclusive levels to this version of the game.

The overall game design just felt perfectly matched, with the art style and dialogue wonderfully in sync with one another, which made for an enjoyable playing experience. Not many games on the market get this right, so there’s a massive pat on the back for Roll7.

The one thing I would suggest is some form of co-op play online, with an array of characters, it’s really surprising not to find this in the game, especially as a definition version of the original.

Not A Hero: Super Snazzy Edition is a definite must buy for me, I love challenging platformers, but ones which break up the frustration with comical scenes and this is exactly what’s achieved very well in this game. The funny dialogue lines and stereotypes for characters is very well thought out and serves a lot of purpose throughout the game.