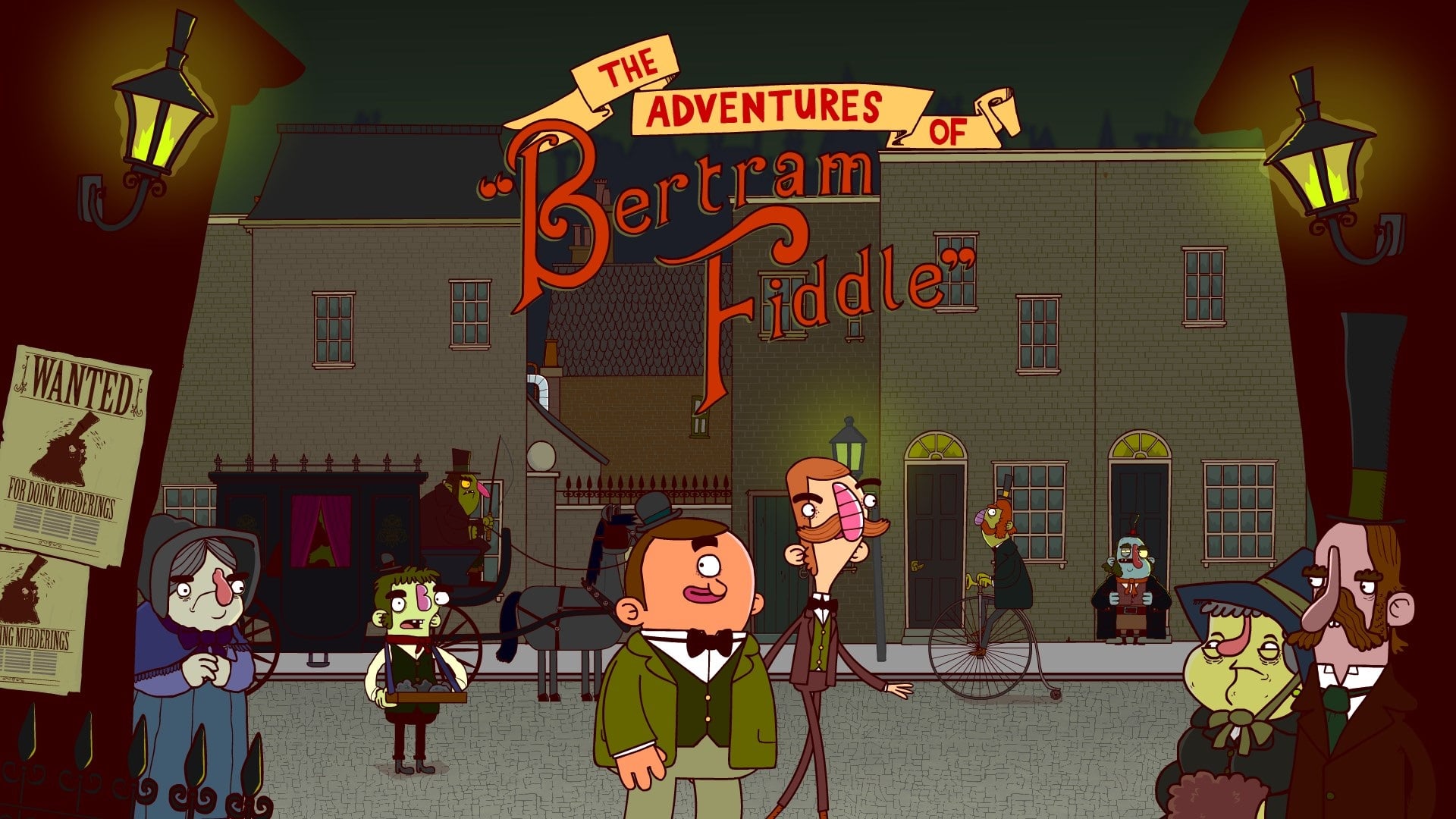 The Adventures of Bertram Fiddle is an episodic point and click adventure formed with tongue-in-cheek dialogue lines combined with a comic art style, created by the talented Rumpus Animation team.

Set within a Victorian London, self proclaimed leading explorator, Bertram Fiddle, finds himself in a bit of pickle as it’s soon revealed you need to track down elusive serial killer known only as Geoff the Murderer before he strikes again.

Visually the game resonates Matt Groening’s Futurama with its striking colour pallete and world full of riveting and peculiar characters to interact with.

With over 30 different locations to explore the game tasks you with an item based puzzle solving exercise, in that you’ll need to collect items of interest from the environment and use them to solve mysteries or to progress. This can include acquiring a vine to use as a swing across a gap in an old broken floor through to combining some medicinal herbs with a cup of tea in your inventory to serve up a lovely cup of sleep potion.

Once you have the right item to use you simply select it or drag it onto the environment where you wish to use it. Useful circular prompts will cue on-screen to help highlight items you can interact with, which can include characters, cupboards to open and paintings to admire on the wall.

The prompts work well although can be inconsistent in that sometimes when you’re holding down the button to show these, they don’t always pop up or you end using an item with the wrong object with Bertram wittingly saying a terrible pun.

The real eye catcher here though, is the dialogue from all characters which is witty and immediately builds up a comical approach to the cast of characters you’ll meet, and trust me, there are some odd balls. Some truly terrible puns will spill from Bertram’s mouth when you incorrectly try to use an item with something, which were found to be the greatest dialogue lines in the game to be quite frank.

On top of that, you have the game’s wonderfully composed soundtrack by Cam Reynolds, which is heavily inspired by 1970s B movies and fits beautifully into the game’s setting and is impossible to miss as it plays throughout sections.

Without going into too much detail on the storyline, there are plenty of twists and turns and it definitely sets you up to play further with interest. Often games such as this can be drag across the finish line knowing you have further episodes to play of the same, but Adventures of Bertram Fiddle doesn’t feel like this.

“The Adventures of Bertram Fiddle has lots of British charm and humour, as well as enough intrigue about it to have you coming back for more.”

Additionally, the storyline is linear – in that there is no decision making which affects later episodes, like you see from other episodic titles like Thief of Thieves or The Walking Dead. Thanks to its humourous interactions though, you’ll never find it too predictable or labourous to play.

All in all, the first episode of The Adventures of Bertram Fiddle has lots of British charm and humour, as well as enough intrigue about it to have you coming back for more. I’m looking forward to seeing how the future episodes pan out on this one and recommend you pick this up too.