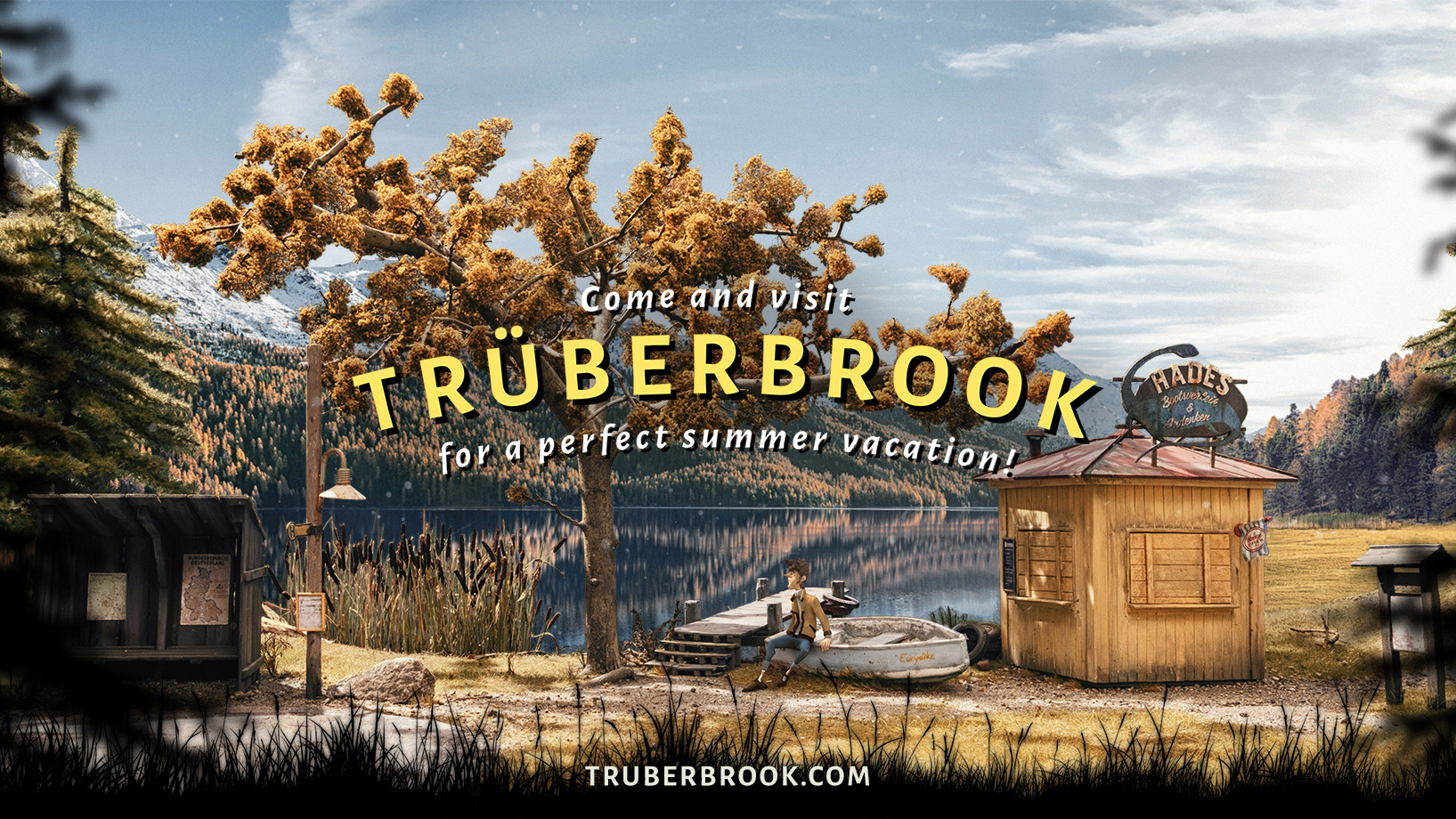 You’re overdue a vacation, why not take a trip to Trüberbrook, you won’t be disappointed, a perfect place to unwind in the summertime, or so they told me!

Trüberbrook is stunning point-and-click adventure, using modern technic’s, with a fantastic easy to use control system. Set in rural Germany in the 1960’s, Trüberbrook offers a rather unique compelling story. Developer’s BTF have captured a fantastic atmospheric game which is heavily influenced by some cult classic TV show’s in the form Of Twin Peaks and The X-Files to name but a few. The game combines a Sci-fi concept with witty, and subtle humour, entailing some excellent one-liner’s thrown in.

Trüberbrook covers a wide range of themes within itd story, as you get to grips with life in the German countryside. Sit back and unwind in what appears to be a rather run down little town, but all is not what it seems as you encounter friendship, loyalty, love, self-discovery, and eventually what is at the very root of Trüberbrook problems, and why a once vibrant little hamlet, is now virtually a ghost town.

You take the role of Hann’s Tannhauser, a quantum physicist having won the trip of a lifetime to the sleepy village of Trüberbrook. Hann’s Lottery winning is a mystery in itself, having convinced himself that he entered no such lottery to win it in the first place. However, Hann’s is in need of a bit of downtime and welcomes the chance to work on his thesis, a chance to push through a mental block period in his life.

As you explore the quaint little Town of Trüberbrook, your Inquisitive nature gets the better of you, as you become enthralled in a mystery that ends with you saving the world.

The setting of the game is a perfect, classic little run down town – the fact that the whole place appears to be in need of some TLC, adds to the sense of adventure, as you look to delve deeper to find out what Trüberbrook is all about. The scenery in the game is breath-taking, you can clearly see the developers have put in a lot of effort with textures, as they look to capture the detail of a worn out, clapped out little suburb. The pallete of colours used to bring the game to life are a wonderful choice and help capture the idea of life in Trüberbrook.

Interacting with the characters within the game is key and is a blessing in disguise. The characters are full of charm, and as you cycle through the possible dialogue options with them, you feel a genuine sense of warmth every time you meet. The voice acting within the game is quite simply fantastic, a breath of fresh air, that aids to the atmospheric direction and approach of suspense, mystery and the thrills that await.

Trüberbrook’s control system is frankly a joy to behold. Command Hann’s with effortless ease, as you move him around his new surroundings. The puzzles are clearly laid out, and the actions required clearly marked on screen by the touch of a button.

Whilst there is a thought process in the puzzle’s set out in the adventure, they really add and entice you into the story. Yes, there’s a little to and throwing, as you go from character to character, unlocking new pieces of dialogue, that often leads to a very much needed item so that you can continue through your quest. What adventure game doesn’t have these little side quests?

But what I can confidently say is that for every little, you help me and I’ll help you conversation, it really does pull the whole story together, and doesn’t feel like a chore as in other games of this genre. When it comes to the puzzles in Trüberbrook, you will be pleasantly surprised. They are wonderfully created and other enough of a challenge, without being to hard to figure out.Some puzzles just require common sense, other’s will put you to the test, as you try to use logic, and wittiness to progress through your journey and gather just where the story is leading.

Atmospherically this game is on point, it draws you in, and the soundtrack used throughout really brings out the mood in certain situations, as the game plays out. The developers have made use of excellent cut scenes, which not just highlight the story being told, but enhance the whole charm of the game’s key characters and the excellent humour throughout.

Trüberbrook offer’s so much, and is full of nostalgia, as your taken back in time. I love the game’s concept and its out of the box thinking. Whoever came up with the setting and backdrop for the game, should receive an Oscar. Totally original, and the 1960’s who’d have thought aye?

The attention to detail in this point-and-click style game is second to none, the humour really adds to the story and its charm. The Story itself, is just awesome, worthy of gracing the silver screen. Put it this way you won’t want to put Trüberbrook down once it hooks you, and it will. The twists, the thrills, the locations, this story will keep you guessing to the very end.