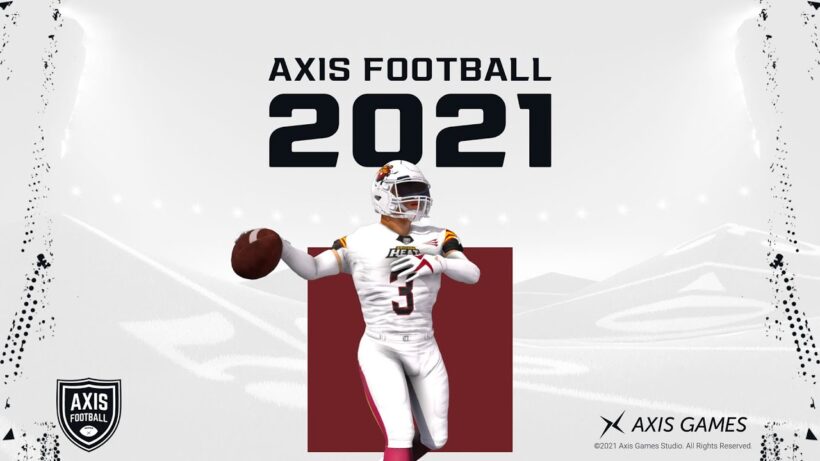 When it comes to American football games, other than the powerhouse that is the Madden Franchise, there really isn’t many to choose from. It’s a bit like the Fifa series of games, once, a franchise dominates, the other smaller games seem to fall away, but that’s not the case with Axis Football which seems to grow and improve year on year. There is one other American Football game that springs to mind in the form of Maximum Football, but the less said about that game the better, not one of my favourites put it that way.

For too long there has been only one true NFL game on the market, Madden. It didn’t use to be this way, American football games use to come from a variety of publishers, with names such as Sterling Sharpe, Emmitt Smith and Troy Aikman, however that was the 90’s.

Things changed big time when EA Sports secured the exclusive NFL license back in 2005, since then pretty much no one has wanted to compete without the NFL blessing. 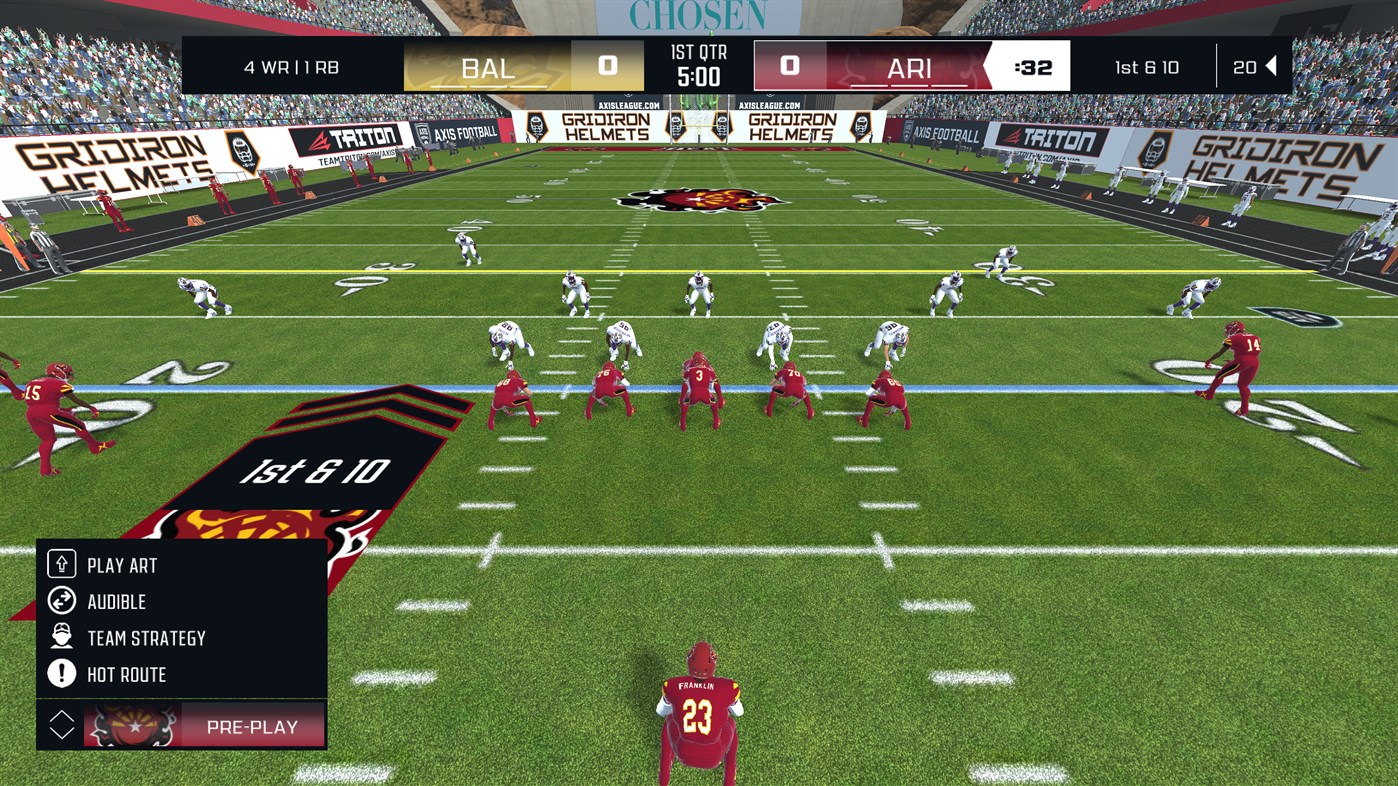 Despite the known difficulties and the mammoth of a game that just sucks in the cash, a few indies have popped up to offer an alternative to Madden, after all competition builds greatness. One of the Indie’s of note is Axis Football, created by Danny Jugan’s Axis Games, in 2015.  Now in its 6th yearly update, it’s hard to imagine that Axis Football 2021 is developed by small crew that you could count using your fingers, astonishing if you compare it with the hundreds that work on producing Madden.

The Axis team grows by roughly one person each year and has obviously studied and been influenced by a fan favourite from the past NFL 2k5, seen as the last real alternative to EA’s Madden Franchise. 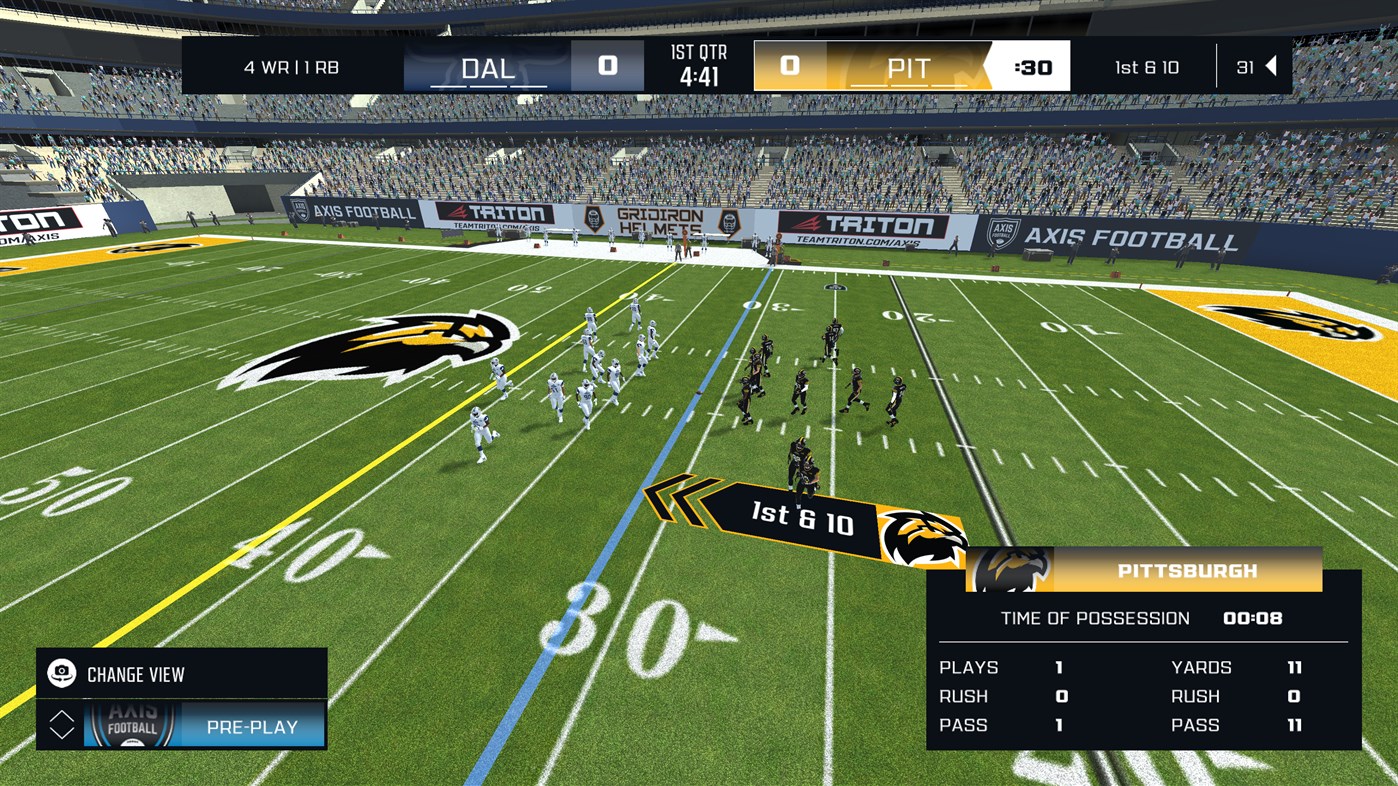 I love Jugan’s Passion and belief “I have a huge passion for football, having played when I was younger and now coaching my son’s team, so I wanted a creative outlet for that,”

“Madden is a beautiful game, but one game can’t cover all the bases, and there were a lot of gamers that missed a truly simulation football experience. That’s what we are trying to capture,”

The NFL 2K5 influence is clear to see and all the signs are positive for this indie developer’s latest attempt, at a simulation capable of offering a serious alternative to a true giant, but does it hold up and is it any good you ask? 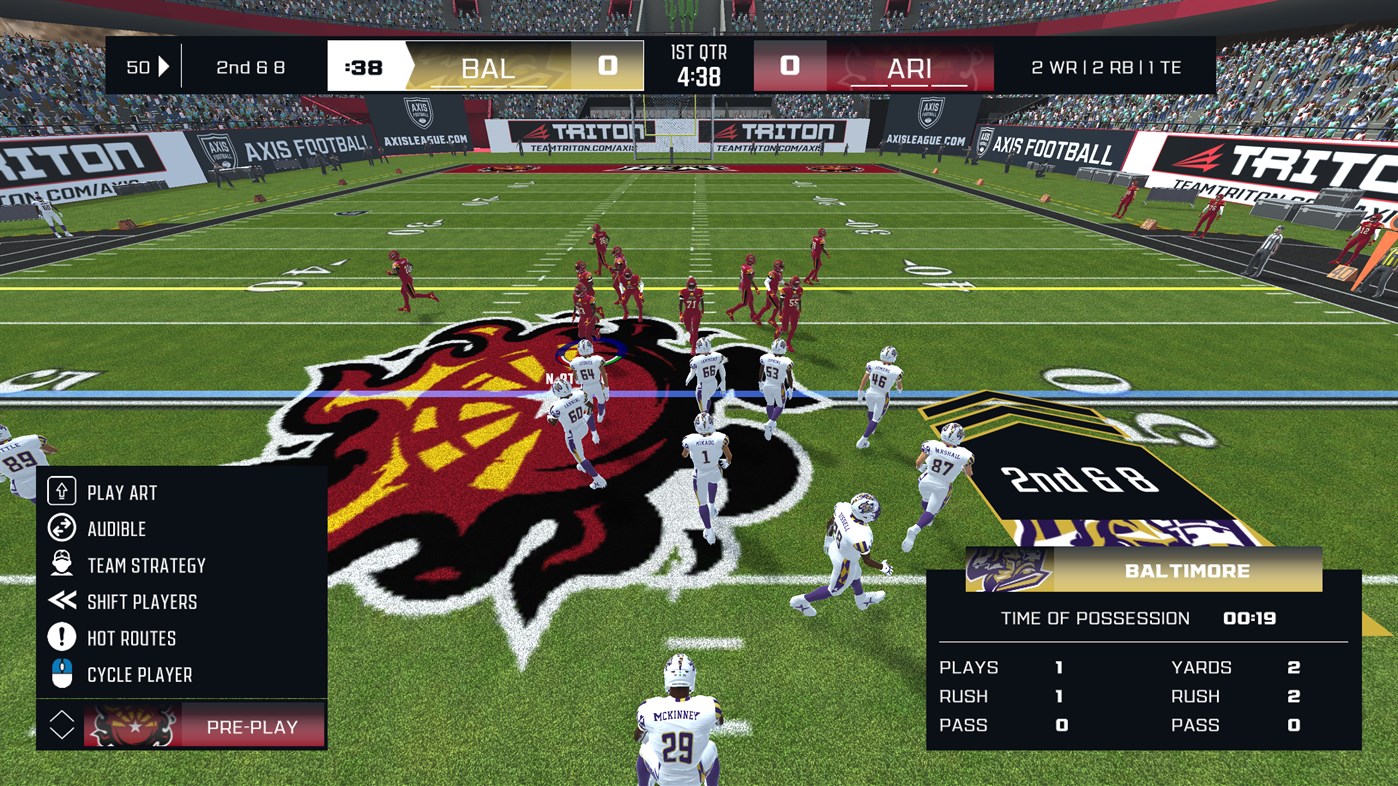 Building on Axis Football previous efforts, I am pleased to tell this year’s indie loving American football is on the money.

The American football simulation has refreshed its immersive gameplay and enhanced a truly extensive franchise mode, with a warmth for customisation. The upgrades are huge under the hood and really maximise what the game is about, pure gameplay that is addictive and a simulation experience that is quite simply breath-taking.

Axis Football 2021 offers a massive improvement in terms of performance, the framerate, has been steadied and increased, appearing to be much more fluid and free. The gameplay itself and the actual in game matches offer smoothness personified. The on-field graphics are improving, but you must remember it’s very small team behind the game, there was never going to be any competing with Madden in that department, However Axis Football’s visuals and presentation do improve year after year, there’s certainly no staying still in that department.

What Axis Football is all about is what matter’s most gameplay and atmosphere. And boy does this game give off an atmosphere that more than makes up for the match graphics. After all it’s no good producing a game that is full of eye-candy but fails where it matters most.

And that leads me on to the gameplay, and i can assure that Axis Football 2021 nails that gameplay.

Do you remember the smooth game play of American football games back on the Sega Mega Drive?

Well Axis Football 2021 gets it spot on! 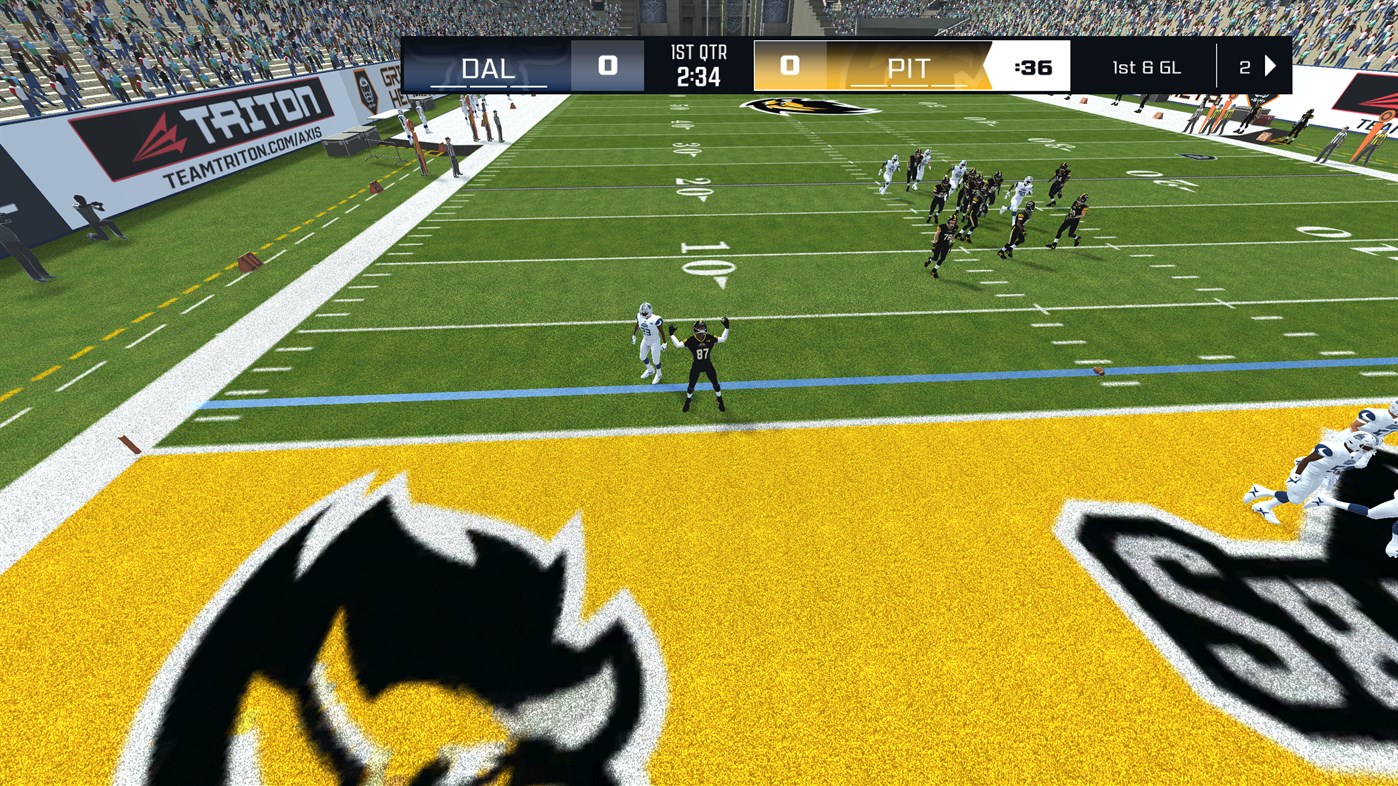 From the plays to the effortless smooth movements of the players, this game hit’s the nail on the head. The controls are a real plus point- easy to pick up, no overuse of button combination’s and are extremely responsive, dare I say they feel as good as, if not better than madden. A true joy to get to grips with that’s for sure.

Presentation wise the game is again never going to be on the same level as Madden, but it does deliver. The in-play commentary is refreshing and excellent to listen to, the half time reports fantastic and the added insight to what the coaches have said at half time really add to the game. The opening menus are simplistic – easy to read and navigate, allowing you to hit the field and go for that all-important touch down in minutes. The in-play and play menus offer a tremendous insight and heaps of advice, which flows nicely within the game. 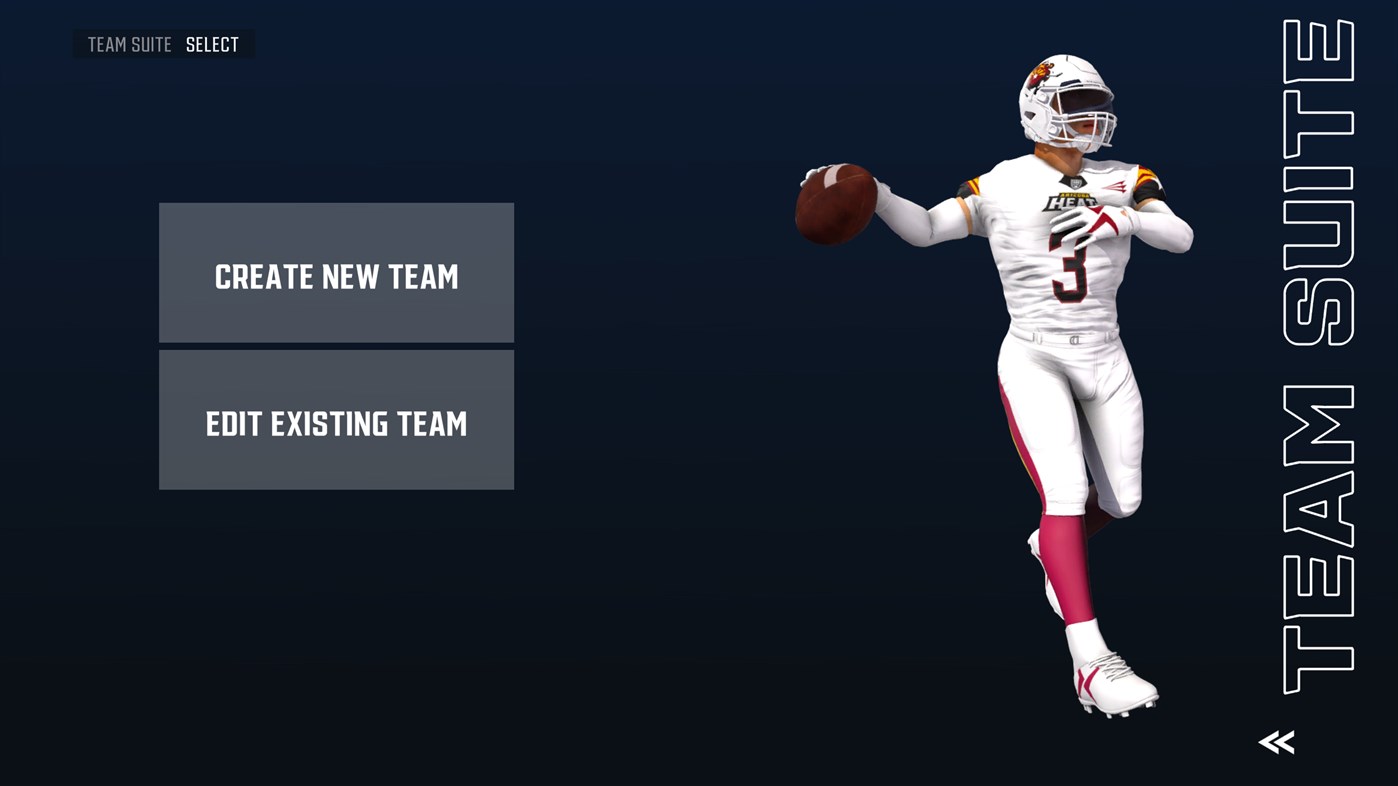 The game modes and customisation on offer in Axis Football 2021is second to none, Axis Football 2021 truly excels with what it has to offer. The franchise mode is a gem- a truly extensively detailed effort, that offer’s a simulation experience that many American football fans have been crying out for.  Packed with stats, and interaction, excellent if you want to build the ultimate franchise.

In franchise mode you are given the chance to complete 16-position coaching staffs, including scouts, position coaches, and coordinators. The mode also offers a detailed coach badge system with an In-depth scouting system for recruiting new players. There’s a customisable practice strategy system to help shape the development of your players and the management facilities option used with in this mode is what everyone dreams of, after all who doesn’t want to build a franchise from the ground up.

Here is a detailed list of just what Axis Football 2021 has brought to the game this year, including all the Franchise mode additions:

– Field Flipping: the offense will now drive both directions on the field.

– Before and after play player movement (walking to and from huddle)

– Team logo editor: choose from hundreds of stock images, then edit their colours

– Team colours editor: choose from hundreds of templates or create your own

– Team play-calling strategy editor: change which types of plays are called on a variety of down and distances.

– Player progressions based on performance, age, potential, and playtime

Just in case you were wondering what has been updated in this years effort. 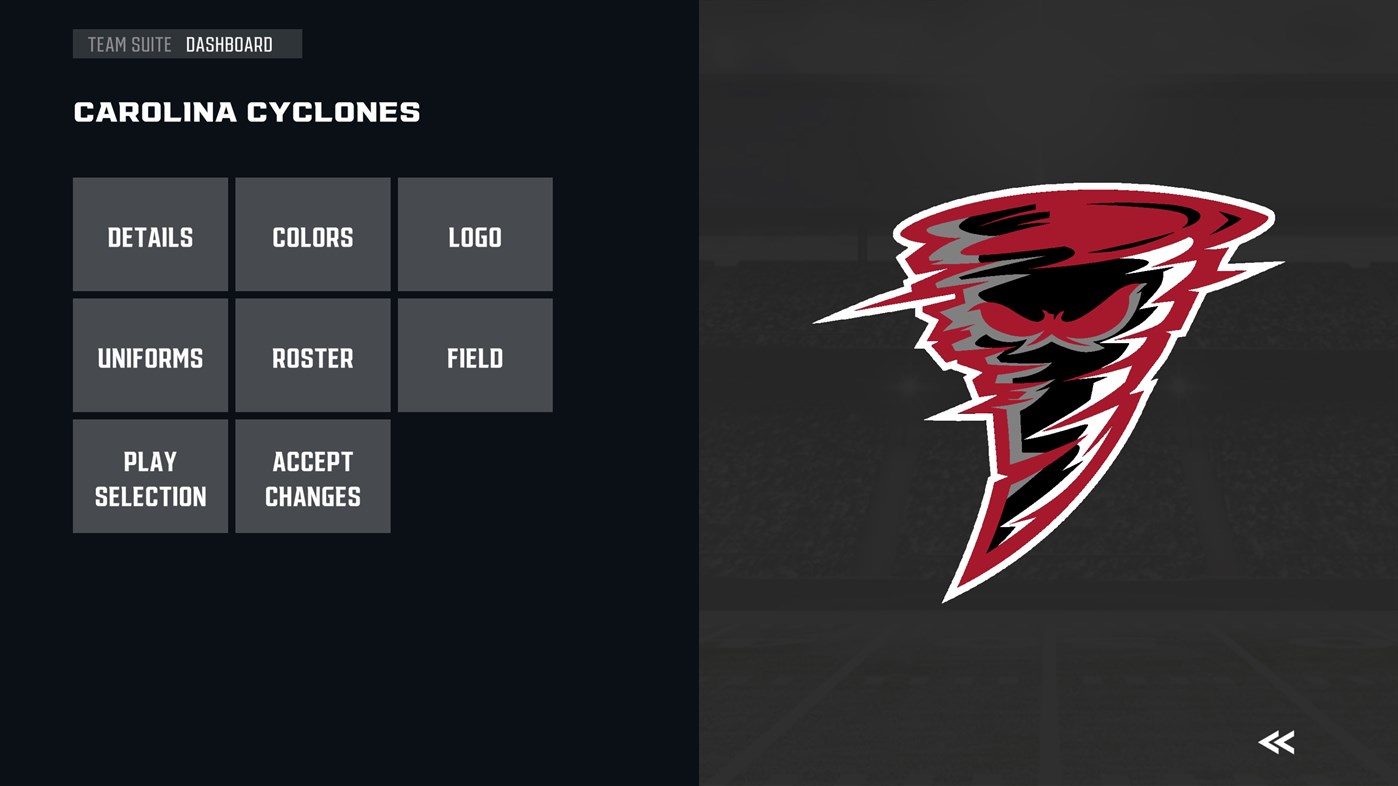 Axis Football 2021 is loaded with customisation options, theres so much to play and tinker within this fanbulous game of American football. For an incredibly small team, I am astounded to see them feature all this in to one game and offer a fantastic experience, with slick game play, that is smooth and effortless. Jam packed with over 2000 plays and 50 formations implement in the game. The knowledge and passion the developers and coders have for the game is wonderful, and it’s lovely to see it being portrayed to its players with informative screens that really do offer insight and help the player improve their game.

The game options are all fantastically represented, I love the fact that they include a spectator mode for the ultimate coaching experience, especially if simulation is solely your thing.

The developers have so much passionate for the sport, and clear shines through in the quality of this game. The only downside to this game of note, is that there’s no online play, but then I would be dreaming if it was included, however it does offer an excellent 2 player locale experience.