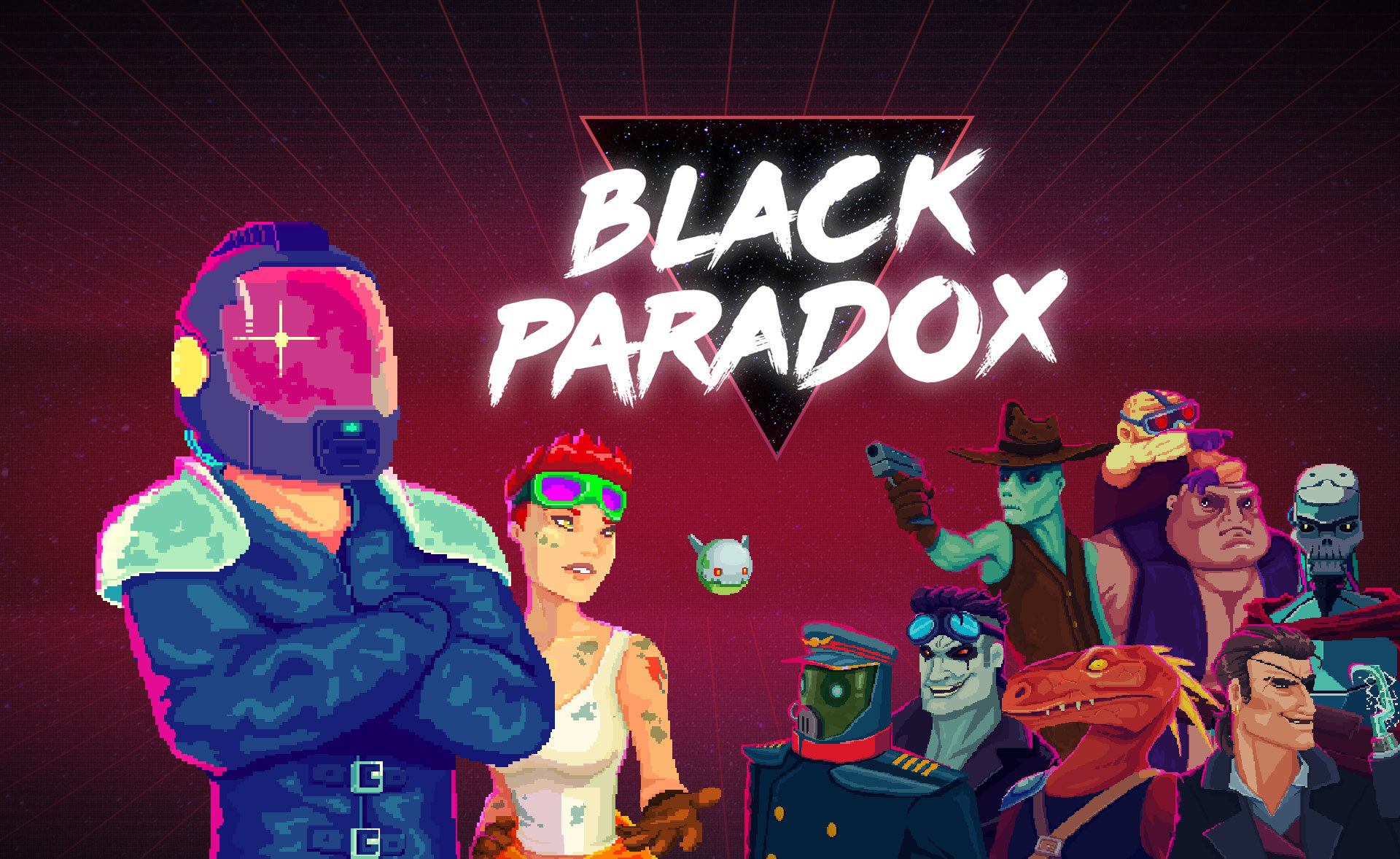 Are you ready to collect some Bounty The very talented Studio Fantastico have dropped their fast-paced roguelite shoot ‘em up to the masses and it’s quite a ride. Packed full of classic retro goodness, heavily influenced by the 80’s, with a sci-fi theme to match, that will have you on the very edge of your seat, as you look to defeat the next onslaught.

Using your weapons of mass destruction, collect power ups, command drones, as you look to survive the oncoming waves of enemies, in a vortex through time and space, to a stunning synth-wave soundtrack which would not be out of place in likes of a certain Netlflix show named Stranger Things.

Take charge as you take the roll of infamous bounty hunter ‘Black Paradox’, tasked with the job of tracking down the most dangerous criminal faction in the galaxy: The Hellraisers, consisting of seven lieutenants, who feature at the end of each wave.

Blast them out of obit, collect the bounty, upgrade your ship, and get ready for the next encounter. For you are Black Paradox, The Hellraisers worst nightmare!!!!

Black Paradox has several key features that enhance the game, helping to make it standout in a overflowing genre.

Boasting an impressive 20 weapons to get your hands on and blast your foes to smithereens. 37 different power ups, which offer an unbelievable amount of variety for a game of this nature. And an amazing count of enemies, 62 in total. Each totally different, with their own individual attack strategies.

Add to that 14 insane bosses with unique attacks, and the odd secret, and it’s clear to see that this is a remarkable addition to the genre.

The fun doesn’t stop there either. Black Paradox has 2-player local co-op, making it awesome for couch play with a friend, and there is a whole stack of upgrade options in the garage to help you work through the most wanted!

The Game screams 80’s from the very start. The opening screen of a tunnel effect, using a wonderful pallet of pink’s and black’s, to a very catchy synth-wave sound, really does set the mood for an atmospheric adventure that is going to be hard to put down, add to that some classic  bounty hunter talk “Same crap, different day” and your all set.

As you prepare to enter the cockpit, the excitement reaches fever pitch, as you feast your eyes on your Avatar’s choice of attire and space craft…… it’s only the frigging Delorean from ‘Back to the Future’ and your dressed in some classic space suit from the planet Vulcan!

Black Paradox is fast and furious, the bullets fly everywhere, reigning in from all angles against a stunning vibrant backdrop filled by pixel art which is breath taking, fitting the game perfectly.

“Black Paradox is addictive as hell, fun and frustrating all at the same time.”

The waves of action are jammed packed with enemies and their varied types of craft and patterns of fire. Black Paradox’s level design is challenging, in fact it’s hard as nails, as the game requires you to upgrade your space ship to progress, so be prepared to fall out of obit again and again, as you look to earn enough credit to purchase those all important shields, and add some new parts to your space ship and increase its stats, whether that be by increasing your speed, armour, or fire power.

Wave after wave, you soon realise that the journey requires a bit of grinding, to get your Delorean up to speed, but that’s okay because Black Paradox is addictive as hell, fun and frustrating all at the same time.

In Black Paradox you must make the upgrade system work for you, and boy can I tell you it’s rewarding, especially when everything you unlock, rolls over to the next game. Shame your mission starts from the very beginning each time.

The boss battles at the end of each wave are a thing of beauty, a challenge on their own, as you duck and weave looking for the best way to take them out.

Black Paradox’s soundtrack is quite simply class and out of this world. The soundtrack fits perfectly with the style of the game, and the ever-changing rich colours on display.

The game is everything you would want from an arcade shoot ‘em up, the 80’s references and feel, the classic gameplay, that makes you pick up the controller and not put it down.

The grind effect is a nice touch, that’s not to daunting and very rewarding. And with the added help of a friend via local co-op play which works effortlessly, you will soon be taking down your foes and collect to the bounties thick and fast.