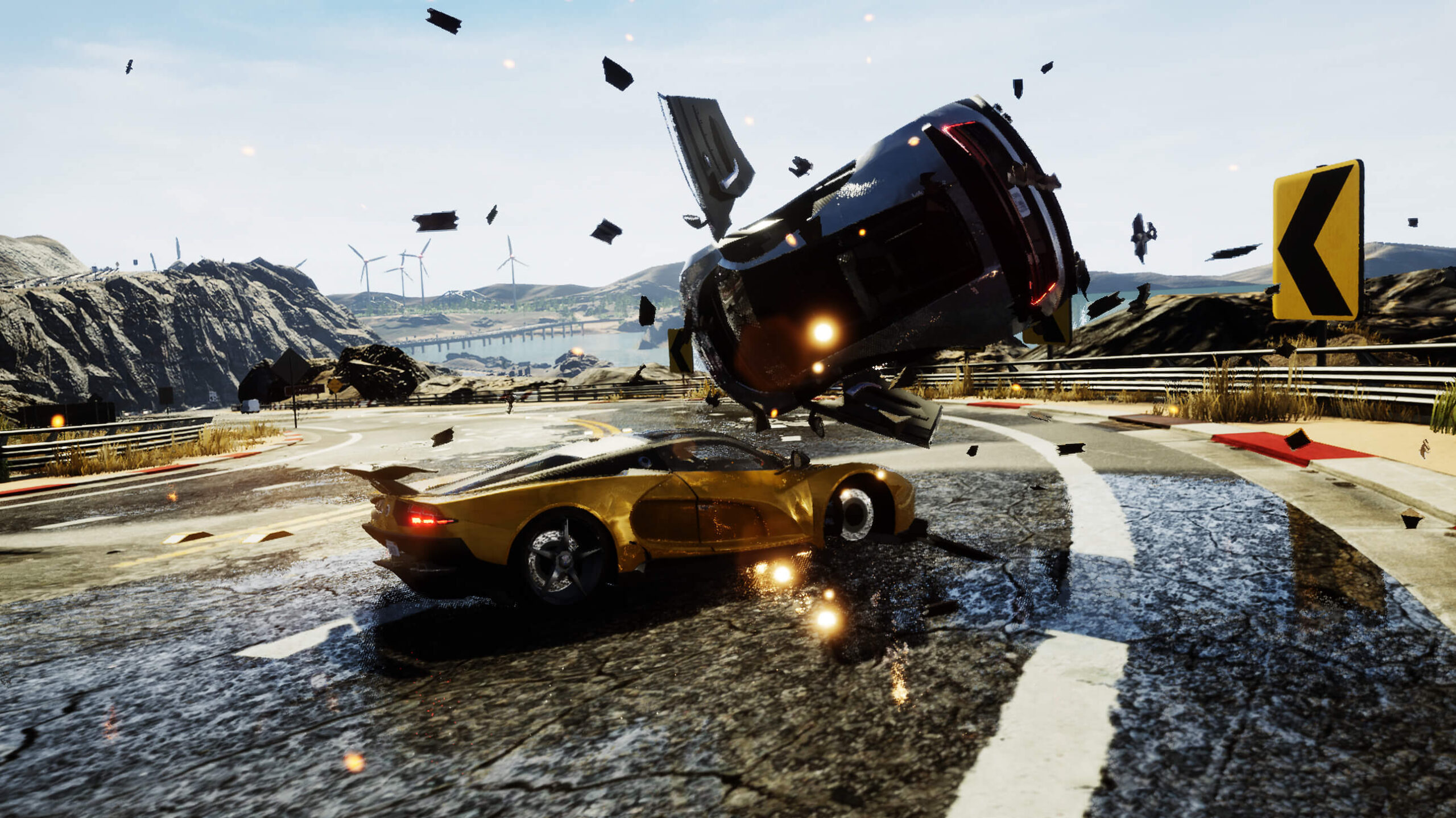 Put the pedal to the metal and get ready for the action. Dangerous Driving offers high octane action at the finger of a button. With fast, pulsating energetic pace, you’re in for the ride of your life.

Dangerous Driving is brought to you by Three Fields Entertainment, which houses the creative talent behind a certain classic series called Burnout. You heard of it?

Three Fields promise to put aggression back to the forefront of the racing genre, recapturing the spirit of yester-year and drive right the way to the front of its oncoming competition.

Dangerous Driving brings you back to the arcade days, with explosive risk taking, as you throw caution to the wind and powerslide round those corners, whilst facing oncoming traffic.

This game offers pure adrenaline racing, enabling you to drive the very fastest cars the way you would in your dreams. It’s all about the need for speed as you weave in and out of traffic, taking the tight bends at high speed, with no remorse for anyone that gets in your way.

Use your driving skills, and your epic drifts to drive as fast as you can, and should a rival appear in your wing mirrors then use that new found aggression and do what comes naturally, take them out! Yes, Takedowns are back and they’re back with a bang!

Dangerous Driving is all about daredevil driving and winning. Accelerating against oncoming traffic, filling your boost gauge and flooring it, as you chase down the glint of your rival’s car in the distant. Believe me there is no better feeling then when you pull up alongside, then slamming your car sideways into there path.

The game is set around the Dangerous Driving Tour and leaderboards. Packed full of events, cars and medal opportunities, you really do feel that you’re back in familiar territory.

“In the Dangerous Tour, you drive to be the best, to take that gold medal.”

Split into several events, with the very best selection of cars available to race in the game, it’s up to you to get that gold medal, unlock the next event, and beat your rival in a face-off to add their car to your collection.

The game is littered with cars to drive and unlock, from Sedan’s, SUV’s, and Coupe’s to the fast thrills that supercar’s, Hyper Car’s and Formula D cars deliver.

Each car class has four categories, your standered Stock, Tuned, Advanced Tuned and Prototype class.  The different classes offer a change of handling, speed, and weight. So, plenty to whet your appetite.

As for the tour itself, well that’s split up into a variety of race types, where finishing first is obviously important, but not always essential.

Dangerous Driving offers standard racing, as you fight your way through the oncoming traffic, fill that meter and do what ever it takes to come out on top, but it has so much more!!

In Shakedown, it’s a test of speed as you try to beat the medal time. If you want gold, then risks and reckless driving is what’s needed here to succeed.

If it’s takedown’s and pure rage that fills your soul, then Road Rage is the style of racing that may suit you best, as it’s all about the takedown’s baby, riding dangerously and beating the takedown target within the required time.

In Dangerous Drive sometimes it’s just mano ‘o’ mano as you take on a single rival and go head to head in a face-off in order to win their car, thus unlocking more events and more gold medals to chase.

Sometimes you just want to keep your foot on the accelerator. Dangerous Driving offers you that in a race mode called Heatwave, a simple race to the finish, keep your finger on the boost and claim your reward in the form of a heatwave bonus, as you boost your way round the corners and the entire race.

As you take on the challenge of oncoming traffic at high speed, you will need to enhance your survival skills, and there’s no better way than to take on the survival races head on – as you look to pass through the checkpoints and go the distance with out crashing. Get taken out, and it’s all she wrote.

As in a lot of racers, there is also a GP style event and a pursuit style race, which are fairly self-explanatory, but add extra dimensions to a jam filled roster of arcade racing action.

Dangerous Driving certainly does offer an aggressive approach to racing, which is very refreshing. Near misses and outrageous drifts become your friend, and those takedowns are a thing of beauty. Aftertouch takedowns are back, which is an awesome feature that comes in handy when crashing and trying to stay in contention.

The races are varied, and the target of gold looming is fantastically incentive. The more gold’s you obtain, the quicker you get your hands on some of the higher spec cars.

The Handling in Dangerous Driving is slick and responsive. Enabling you to get out of some very sticky situations quickly. The sounds from the engines are a little disappointing, with the cars all sounding the same. This is made apparent due to the game having no soundtrack to drown it out. Dangerous Driving feels a little exposed in this area, still you can always listen to your own music I suppose using Spotify.

The tracks on offer are wonderfully created, offering some beautiful racing landscapes and scenery, with superb use of rich vibrant colours and textures. Dangerous Driving is densely populated with traffic, and even with only 6 racing opponents on the track, you always feel like there’s a crash coming just around the corner as your eyes are glued to the screen.

Not only that, but it has a real sense of speed throughout. The mechanics handle well, the drifting is on point as you look to slide out of the way of potential hazards. The speed blur is a nice touch without distraction, and the fact that your opponents never seem to be too far from your bumper, adds to the excitement and tension.

Dangerous Driving has a real sense of replay-ability about it, there’s something about racing dangerously against the clock, trying to achieve that illusive gold medal and topping the leaderboard. However, the lack of a soundtrack, and the cars sounds being a bit dire, leaves a slightly deflated feeling.

One last thing, you may have noticed there’s been no mention of online racing. At present there is no online play, but racing fans rejoice, the promise of online racing is coming in the next update of the game, which will elevate Dangerous Driving to the next level, after all there’s nothing like a takedown on an online rival!