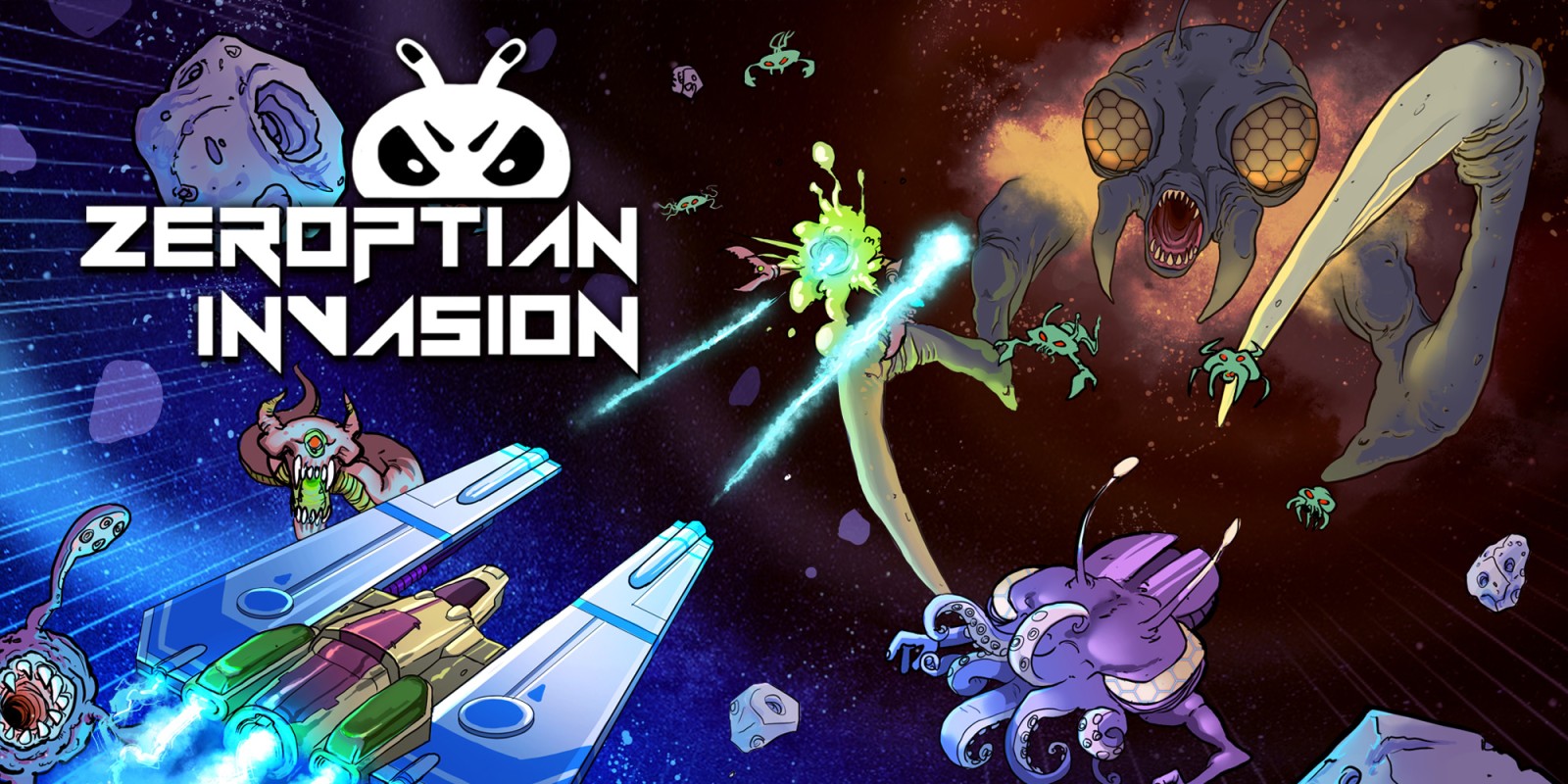 “Beam me up scotty”, At last there’s a reviewspace invader game for us lucky xbox owners to blast away on.

Zeroptian’s have returned to the planet, and they are invading thick and fast, defend the planet and protect the galaxy. The people’s fate is in your hands!

Zeroptian Invasion is this gen’s answer to the arcade shooter of yesteryear. Ratalaika Games S.L. have developed a classic space invader, with a nostalgic feel. The game is heavily influenced by retro arcade shooters and the golden age of the arcade, the developers have mixed a few modern elements and twists, with some authentic pixel art and sounds to form what is a challenging space invaders shooter.

Zeroptian Invasion has some classic features for all you space invader freaks, boasting a CRT filter, Aesthetics Pixel art in retro 1-bit beauty, with a wonderful colour pallet to match. Nostalgic gameplay with a progressively challenging experience to a Chiptune soundtrack comprising of original songs for each area in the game.

The Levels found in Zeroptian Invasion offer a real menacing approach, offering unique settings and backdrops, with immense bosses and a variety of enemies to blast in to smithereens.

Zeroptian is a space invader’s fans dream. Jam packed with retro goodness, with a sprinkle of modernisation to boot.

As with all space invader games, the object remains the same. Shoot the invaders out of the sky as you cycle through waves of Zeroptian attackers.

Use Shelter, as you hide your ship behind ever changing cover from your standard bases, to side scrolling horizontal shields.

Power up your spacecraft by shooting the flying saucer as it wizzes above, in the hope of dropping that all important power up, ranging from extra score, spacecraft shields, to an upgrade in your arsenal, it will be worth your while in the long run.

Lives are limited in Zeroptian Invasion, with just a measly two chances, before complete world domination by the alien’s army. However as in most space invader games, you can be rewarded with an extra craft on successful ascension of score.

The level and wave design bring a wonderful reminiscence feel. The first few levels play out in monochrome black and white, but soon become a thing of beauty with colourful sprites, and ever-changing backdrops. The enemies differ from level to level, with increased difficulty as your progress through your mission.

The boss levels offer a slight twist, with huge creatures, not just firing your standard lasers, but offering the ability to shoot shapes, which float around the screen with speed. One touch from them, then its all over for your current ship.

One interesting take on the boss front, is when your space shield suddenly floats up and becomes the enemy itself…… I certainly didn’t see that one coming!

The mechanics of the game are a little clunky but bear with it and you will soon have your spacecraft zipping from side to side, in an attempt to avoid the bullets that are firing your way. Keep your wits about you and try to keep focused as the bullets come reigning in from all angles.

On the firing front, its standard mechanics, as you fire off your weapon by the press of a button, however with only one bullet on the screen at any one time, accuracy will be key unless you lucky enough to be carrying an upgrade to you weapons.

Another big component in games like these is leaderboards and score. Yes, you can progress through the levels with the added option to continue once you lose all your lives, but where’s the fun in that? Space invader games excel with the incentive of topping the leaderboard, so protect that life, and drop as many alien’s as possible, as a bonus is offered on kill ratio for each wave passed.

“Zeroptian Invasion is a real blast from the past, with some nice modern touches and a few twists here and there.”

The novelty of the soundtrack adds to the game and helps set the scene of a transportation back to the golden age of the arcade.

Zeroptian Invasion is a real blast from the past, with some nice modern touches and a few twists here and there. If you love your classic shoot em up then this is one not to miss!