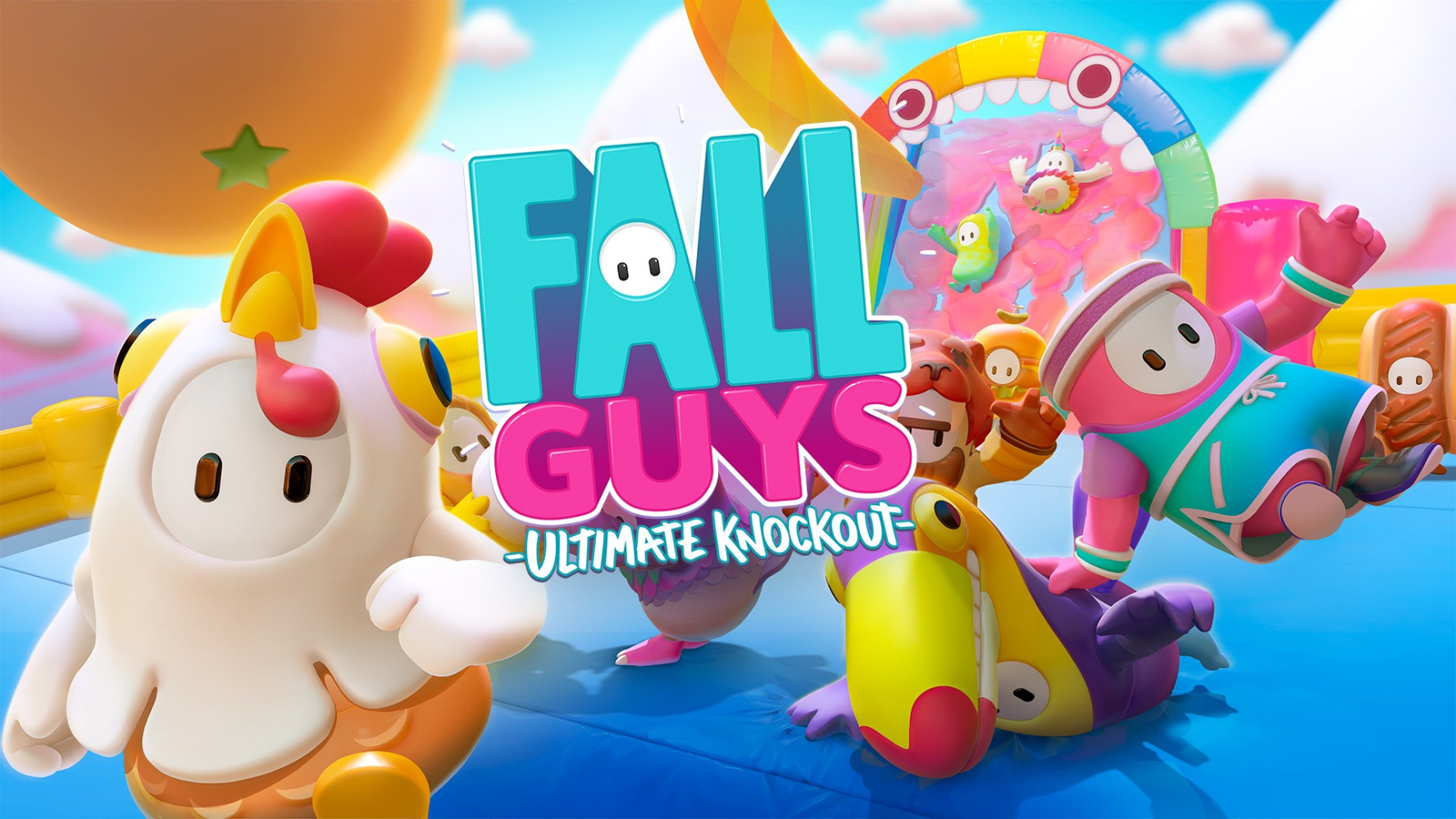 Whether you love or hate battle royale games, there is no denying that they dominate when it comes to retaining a loyal user base and scooping vast amounts of revenue. With Playerunknown Battlegrounds sparking the fascination with the genre back in 2017, we have seen behemoths eclipse them with Fortnite, Apex Legends and Call of Duty Warzone having complete control over the most played games charts. It is really a bittersweet relationship as most of these experiences are completely free of charge to download and get started. But very soon you’re consumed with the intrigue of paid cosmetics, battle pass systems and wacky dances. Of course, spending any money whatsoever is a choice, but if you’re anything like me, you dive straight in there. Fall Guys is a title that most will have heard of, but it has been only available on PC and Playstation, until now! The game has been remodelled from a paid-for experience into a free-to-play title for its launch on Xbox and Nintendo Switch consoles. 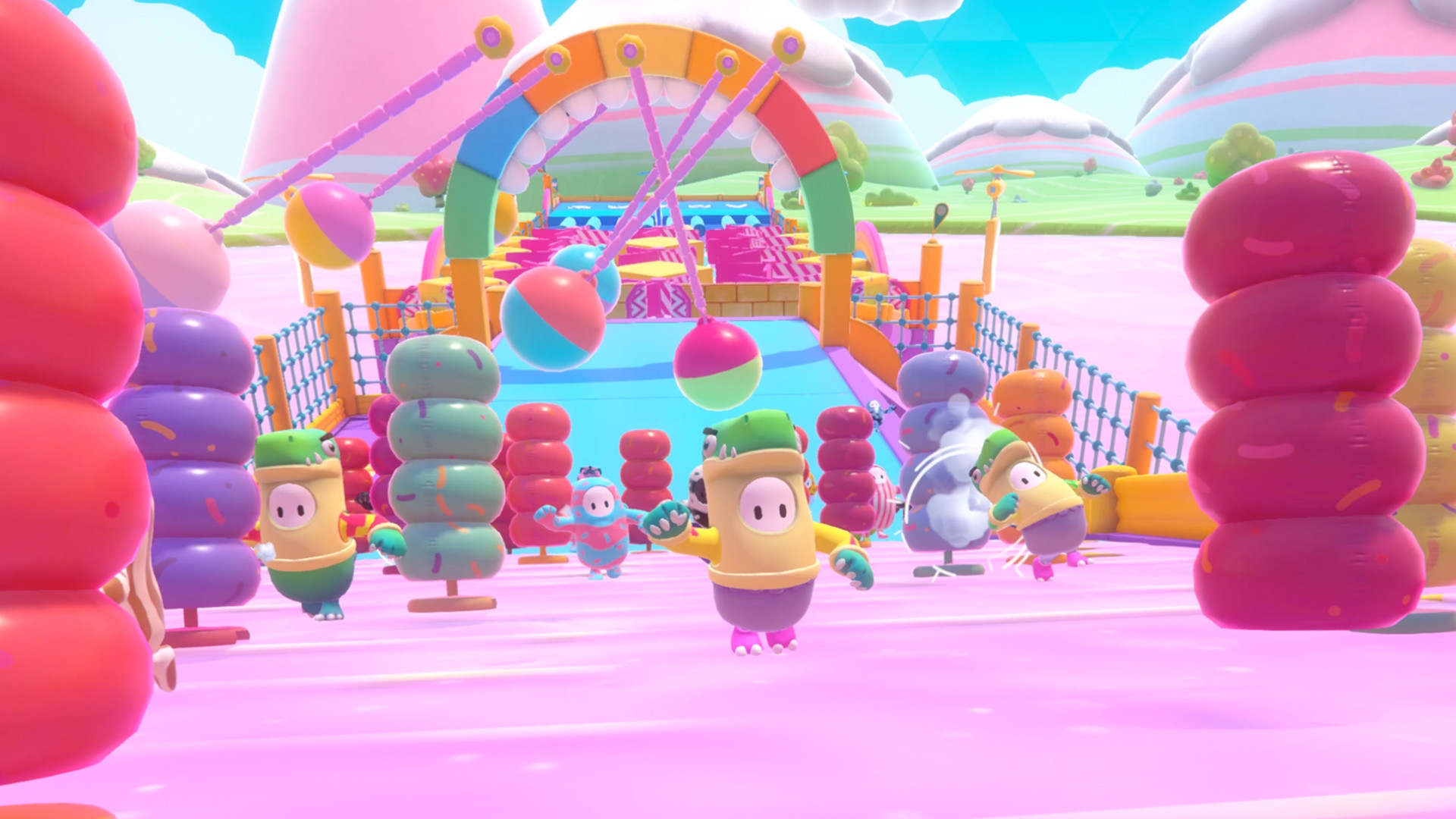 What is Fall Guys?

Fall Guys could easily be described as Squid Games but without the crazy murderous Chinese doll. Instead, we have a cute, colourful and warm plethora of mini-games with lovable yet clumsy characters. Sixty players start each game and you’ll be playing through five rounds with the premise of being the last man standing at the very end. You must qualify from each round and be as quick as possible to achieve the task in front of you. This could be racing to the end of an intense and crazy obstacle course, ensuring you don’t get knocked off something or even having a game of volleyball with an opponent. Not meeting the criteria will eliminate you and you are out of the game for good with no way to return. Fall Guys can be played alone, as a duo, squad or with a huge group of friends in your very own custom matches. Do you have what it takes to take the crown at the end? 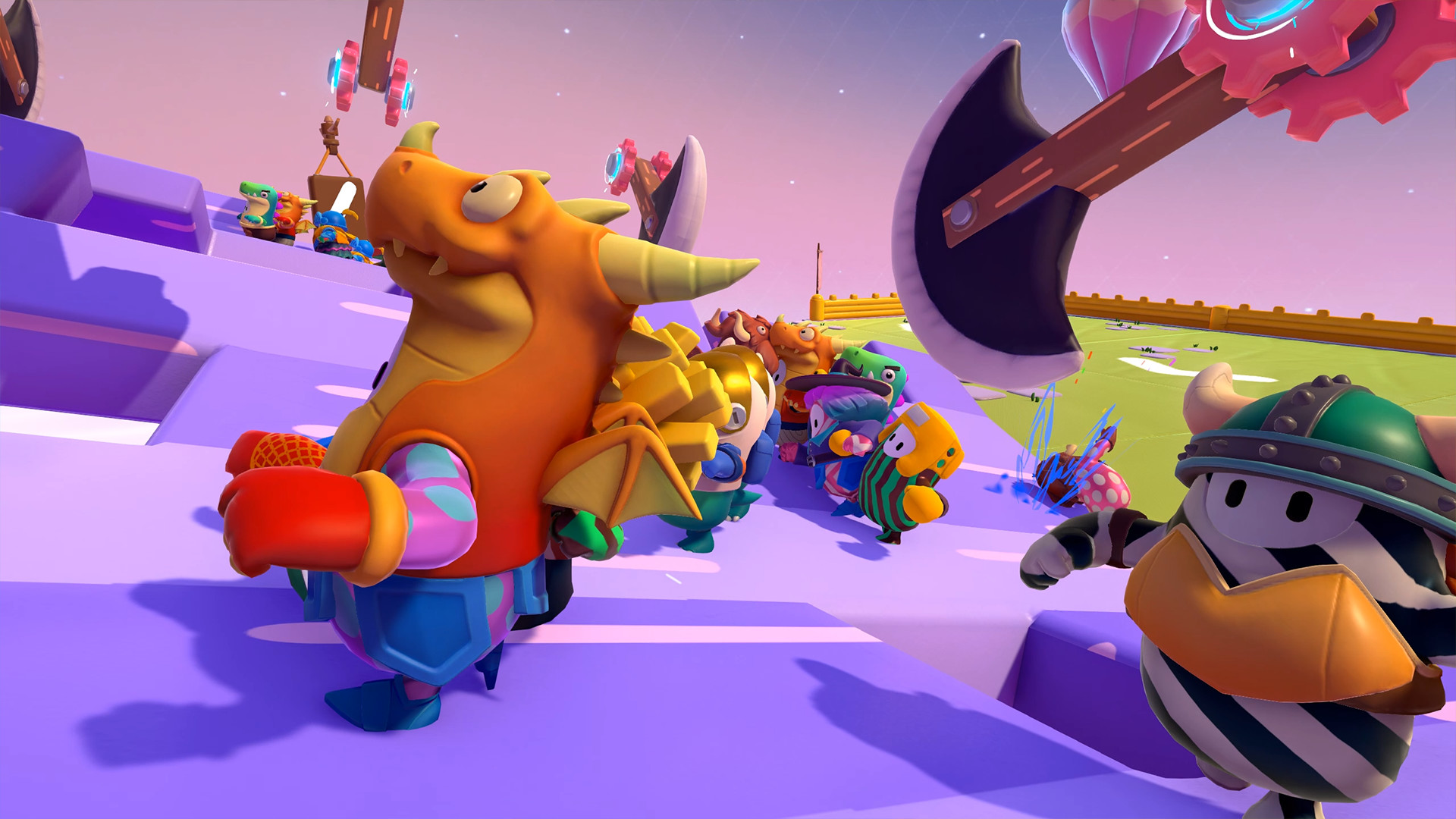 There aren’t many games that I’m jealous of other platforms getting over Xbox, but I’ll hold my hands up and admit that Fall Guys was one of them. Having grown up watching the popular TV series Takeshi’s Castle, this was the perfect transformation from that crazy show to having a crack at something similar yourself, albeit with a controller in hand. The gameplay is super simple and is literally just using the analogue sticks to guide your character with the A button to jump. Occasionally you’ll be able to use the right trigger to grab onto a ledge or even give someone a hug. Whilst the control system is straightforward, the game can be constant punishment but somehow still brings consistent laughter and joy. If you’re the competitive type, then you’ll still strive to win all of the time but be warned, your inner rage can emerge.

Progressing through races will see you traverse a giant obstacle course as quickly as you possibly can. You can only imagine the carnage in the first round when fifty-nine others are charging towards the end goal. With patience and precision, you will find yourself balancing on see-saws, dodging swinging blades, sliding down pipes and more. Get knocked over or fall off the environment and this will set you back a little with some work to do in catching up. This is just one example of a multitude of random mini-games you’ll encounter. I enjoyed the variance and element of surprise as you never knew what you were heading into from round to round 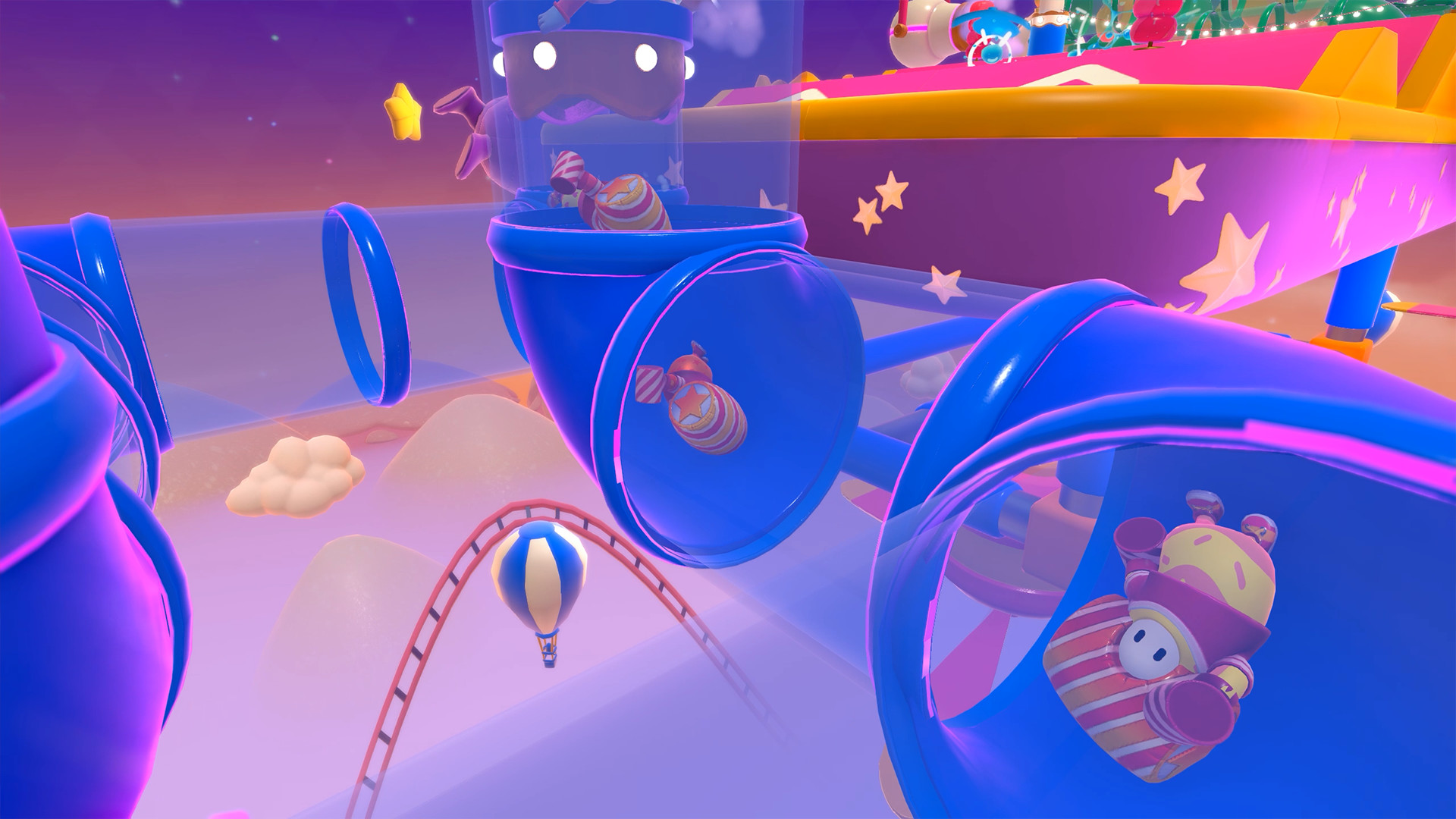 With any free-to-play title these days, it is a dead cert that cosmetics and battle pass systems will be present. The answer is yes, there is a battle pass and there are paid options to make your wobbly ragdoll guy look pretty. The battle pass presents itself as the usual tier system with free and premium unlocks with 100 levels to work through. Nothing that you unlock here will change the mechanics of how the game operates and is purely a choice. If you’re happy just being a solid colour with a little fancy pattern then you won’t really want to spend money here. If you want to dress up as Ezio from Assassins Creed and wear a giant dragon’s head amongst other cool options, then it is totally up to you.

There is an in-game currency called Kudos which can be used to unlock certain cosmetics, these can all be obtained through normal play. Whilst the options for these purchases aren’t all bells and whistles like the paid content, there’s some decent stuff here too. Extra Kudos can be earned from completing daily, weekly and seasonal challenges. These could range from simply covering distance on foot across the games, qualifying through rounds and loads more. There really is a good scope for longevity if you were to purchase the battle pass which goes for around £6.49. 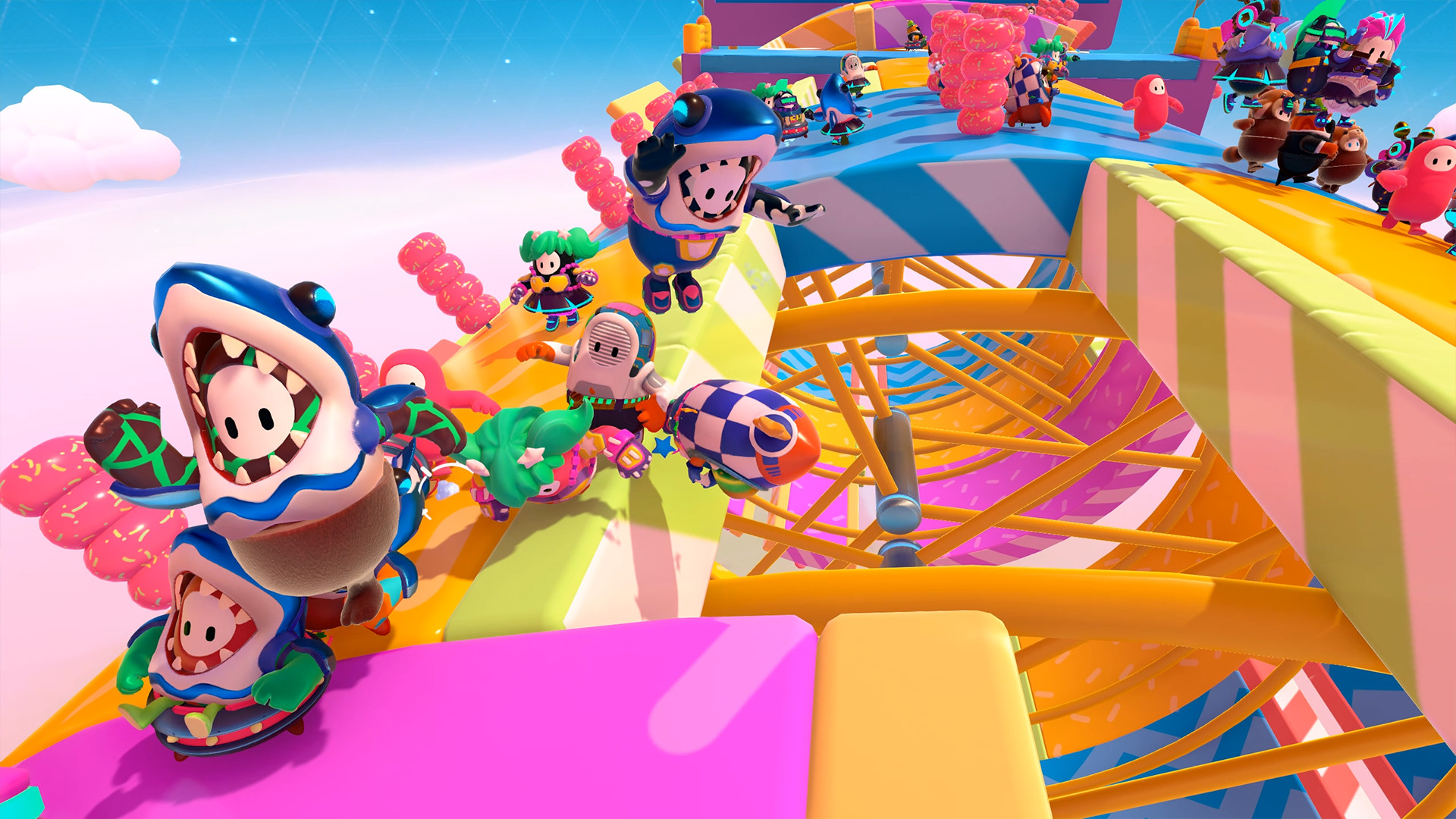 Visually, Fall Guys isn’t anything overly special in terms of its looks, but it’s more its level designs that make the game excel. The diverse range of arenas and mini-games on offer were always interesting and exciting. You quickly choose preferences over what your favourite levels are and the ones you don’t like so much. It was quickly apparent to me though that you would see the same games over and over again. I wasn’t sure whether this was the randomiser picking out the same ones frequently but it did start to come repetitive and I craved to see the levels I hadn’t played yet gliding past every time the game chose what we were playing next. I’m not sure if these environments change with each season and whether they have altered much in the last two years the game has been on PC and Playstation, but I feel it does need a bit more content.

The presentation is vibrant and vivid with a huge assortment of neon and pastel colours popping all over the screen. You’d think this might be a little overpowering but it actually displays really well and blends in with the gameplay, reaction times and refresh rate on screen absolutely nail on. Now for the music, it is ridiculously catchy to the point I couldn’t stop humming it in my head and I would still have the tunes in my brain hours later. This isn’t a grumble though, I played Fall Guys at EGX in London in 2021 and these jingles were an echo through the arena. The soundtrack really adds to the pacing, adrenalin and atmosphere of the gameplay and is a huge strong point of the game. Characters make adorable and charming sound effects, similar to the ones you’d hear in Worms or Lemmings. 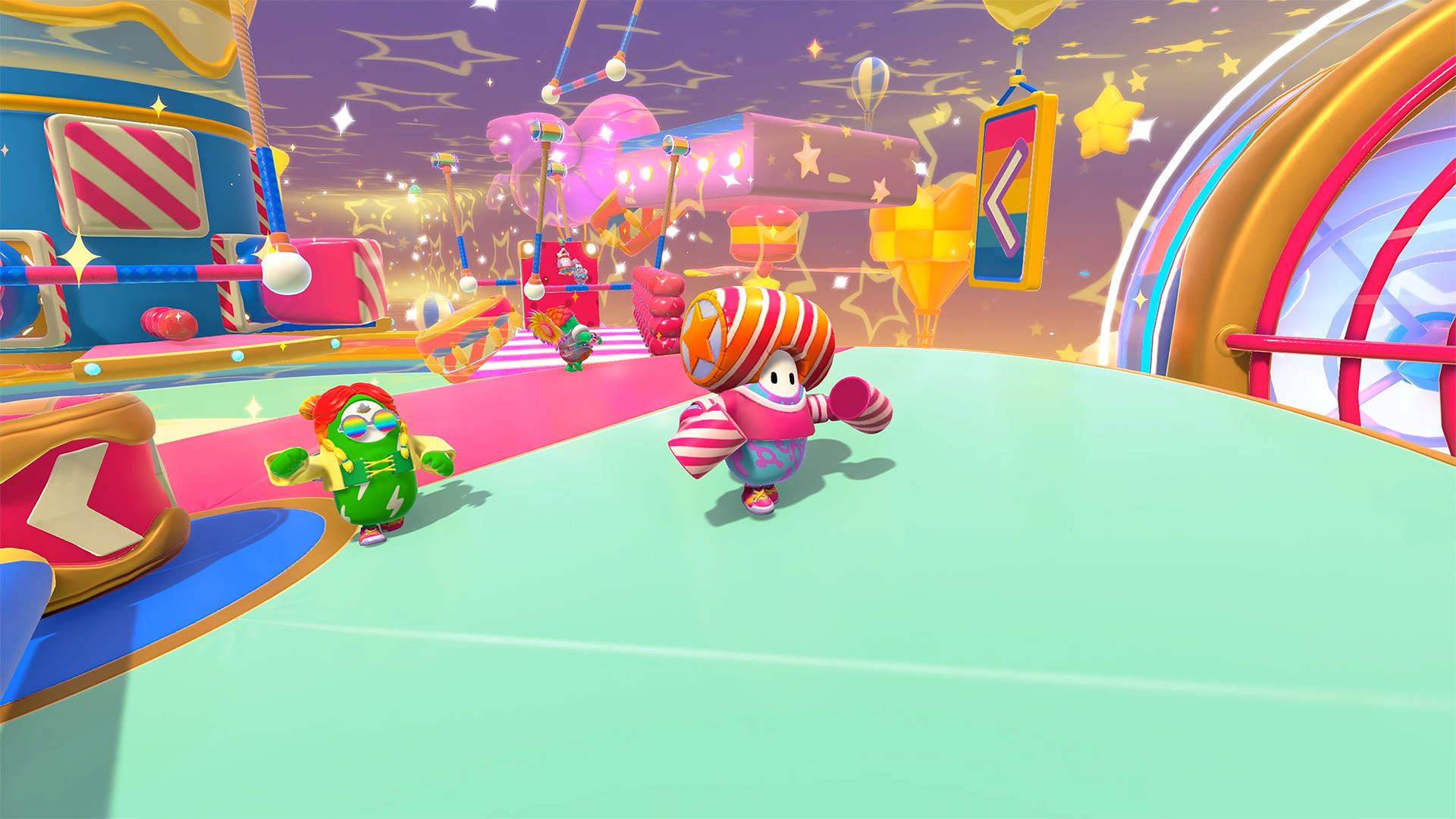 Fall Guys is insanely fun on your own or with a group of friends. It breaks apart from the hardcore battle royale titles and caters to casual and experienced gamers alike. Even my partner who has next to no interest in video games was consumed in watching and playing this one. If you’re looking for a game for kids without any violence or bad intentions, then this game is more than worth the time. Mediatonic and Epic Games have taken the game in the right direction by making the game free to play. It is easy on the hard drive unlike games such as Apex Legends and Warzone which consume so much memory so there is little excuse not to try it. After wanting this one to come to Xbox for a long time and it finally being here, I know I’ll play it for years to come. There isn’t a game like it and it won’t fail to put a massive smile on your face and make you howl with laughter. Whether you one a short blast of gameplay or hours of ducking, dodging and weaving, there is something for everyone here.