It has been almost 20 years since EA BIG launched SSX 3, which some say is arguably the best snowboarding game ever made. It mixed high octane action, an eclectic cast of characters & stunning visuals to produce one of the most memorable 6th Generation video games

Since then, many have tried, and failed, to fill the void left by SSX since its decline in 2012 and that latest contender is the game Shredders!

My name is Harry from the Gamers Watch Podcast, and this is Shredders

Shredders from the start is less about the button mashing mayhem of earlier snowboard titles, and focuses more on the zen like feeling of pulling off the perfect line

The game centres around your team, Indy 540, a group of friends looking to make it big on social media. Along the way you meet, race & contest against famous faces within the snowboarding scene as you progress through the gorgeous world to get to the summit of the mountain. The Invitational. The game starts with the basics, movement, hitting jumps and simple tricks but through the course of a few tutorial missions it effortlessly introduces new and exciting tricks to your bag that really helps you learn the basics quickly but ties in the idea of trying new things right from the get-go. With controls that some may find difficult at first, the game does a great job of easing players into simple trick-based missions and the entire first area of the game acts as a sort of open world tutorial to whet the appetite of budding new shredders.

The controls are something that need time to get used to, with the main difficulty being that grab tricks are performed with the same stick that initiates rotation it can sometimes feel like the 2 get in the way of each other, but this is an unfortunate disadvantage of not having 3 thumbs. For people, like myself, who have endless hours in games such as Skate or Skater XL it takes little time to adjust, but for newcomers to the extreme sports gaming scene this could be an issue that may cause early frustrations.

For a game about snowboarding, you would be remised to think that a story could be moved to one side, however what Shredders has managed to do is create a simple enough story with engaging characters that makes you want to watch each cutscene for the great voice acting and chemistry found on screen.

But, much like SSX games of old, the great cast of characters, alongside some solid performances by the pro boarders, really does help move the narrative forward in a sometimes obvious but fun way. 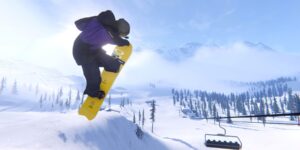 In a contrast to the sometimes in your face characters, the level design is subtle but effective, it uses the ridges or mountains and rolling hills to direct the player where to go without the need for neon signs pointing the way.

Shredders allows players to go off the main path to explore and find new lines, but the comfort of knowing that just a few yards away will be some well-designed and thought out ramps and set pieces that does a brilliant job of intertwining the realism of the world and characters with the arcade feel of the huge ramps and gaps you’ll be shredding. 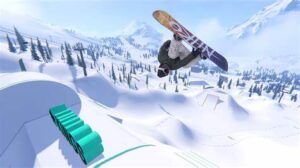 The world of Shredders looks beautiful, if not a bit rough around the edges at time. When you’re flying down a ramp section it looks stunning. The realistic character movements and models, the gorgeous looking snowy tundra and the white-on-white backdrop of mountain ranges are genuinely breath-taking at times, but it is in the details that Shredders unfortunately falls slightly. With performance issues in cutscenes causing pop in, to ramps not rendering in time when at high speed or with close ups of cars and ski lifts looking like Unreal Engine assets just dropped in the world, these small but prevalent issues are distracting at times.

The only other main distraction I found when playing is during the mountainous regions of the game when boarding downhill and hitting rocks the noise created just doesn’t sound nice. However, the rest of the sound design in this game is masterful. 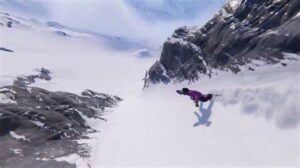 The soundtrack produced by Belgian artist Jennifur WITH A ” U R” has created the perfect backdrop of chill lo fi beats that always feels fresh and fun, it hits the brief of Shredders to a tee.

Some of my favourite moments haven’t been in the high octane 1260 Backside Japan Air grabs, but rather calmly slaloming down a freshly laid snowy hillside with the sounds of my board carving through the mountain as the chillest of beats flows with every movement I make.

From a sound design perspective, it is outstanding. 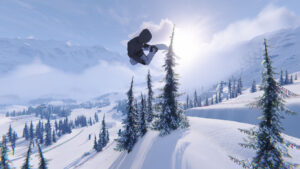 So, is Shredders the plug that will fill the SSX 3 sized hole? No. But it was never meant to be.

The joy of Shredders doesn’t come from the high combo trick scores to get you higher on a leader board. But instead, the joy of Shredders comes from simply being in the world. Finding a new spot, unlocking a new board, hitting that perfect 900 BS air. It is as far from SSX 3 that a snowboarding game could be, but what that allows is for this game to carve its own place and leaves other games like the bloated objective driven Steep in its wake.