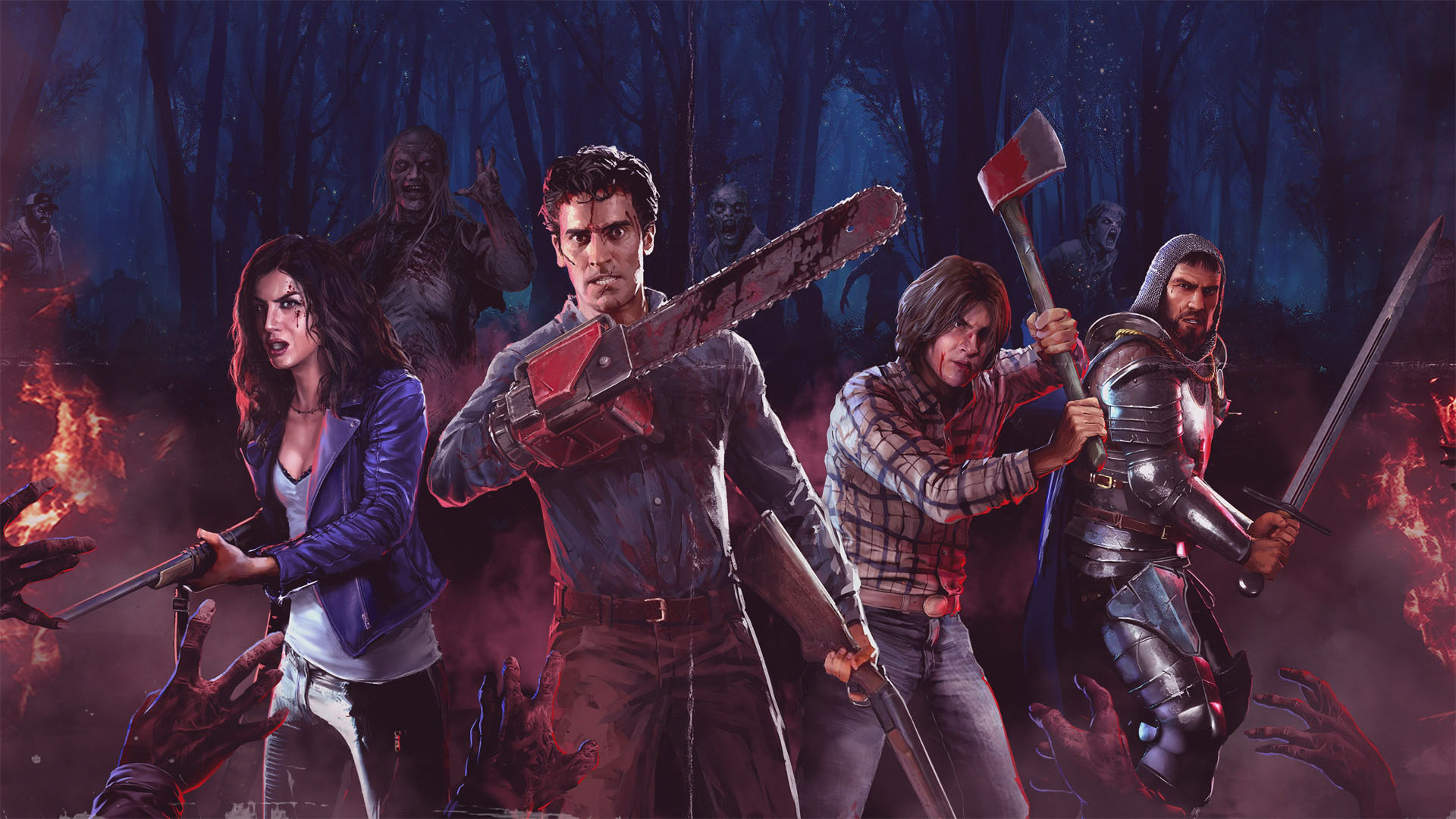 So how does an asymmetrical multiplayer Evil Dead game play? In short, we can say that the core multiplayer experience for Evil Dead The Game is quite unique. It’s a complex take on the King of the Hill game mode. So the first thing you need to do is find the 3 pieces of the area map. The game will give you clues as to the whereabouts of the pieces. Once you survived and picked up all 3 pieces, the next step is to find the Lost Page and the Kandarian dagger. Both will require players to stay near the item so the meter fills up.

Players have 30 minutes to find the aforementioned items. Then it’s off to fight the evil spirits. Once you and your crew fended off the evil spirits, you’ll need to protect the Necronomicon from enemies until the counter reaches 0 so you can win the match. And yes, you’ll be able to defend yourself by collecting a decent variety of melee and ranged weapons ranging from the simple knife to the famous chainsaw. While you attempt to clear your objective, enemies from the Evil Dead universe will be gunning for you and your friends. 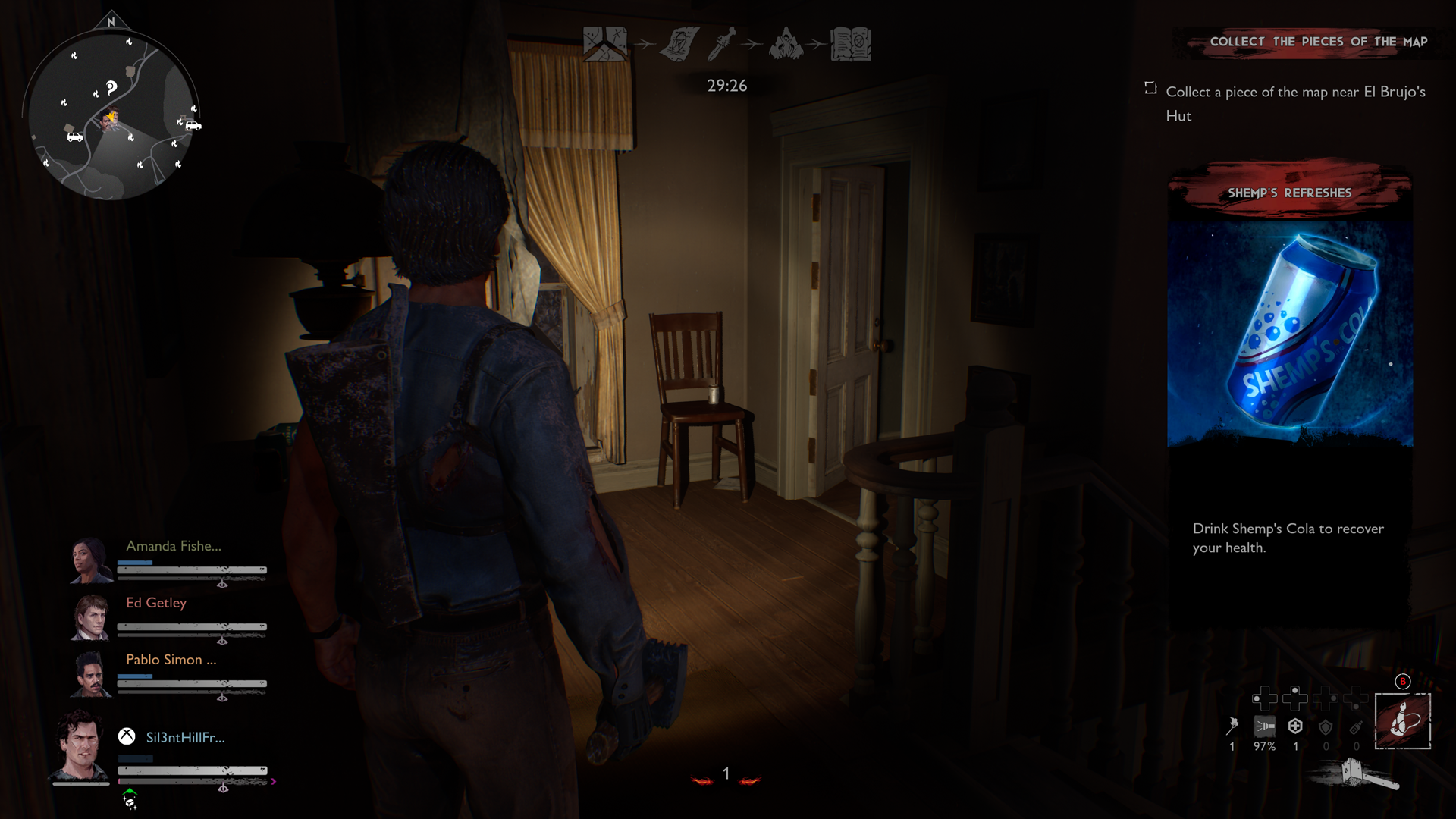 After completing successfully early requirements such as grabbing control of the Kandarian dagger, you’ll be rewarded with Supply chests (there are also chest hidden across the large map). Inside those magic boxes, you’ll come across Pink F bottles among other things. These bottles will allow you to upgrade your abilities such as health, increase melee or ranged damage, and resistance to fear; among others for the remainder of the match. Given that as the match progresses, demons level up, this is only fair.

There are four character classes: Leader, Warrior, Hunter, and Support. Each class has specific characters all of which have unique skills. For example, using Army of Darkness Ash Williams, when reaching level 25, his chainsaw attack will be doled out faster and deal more damage. Each character also has a unique Active Skill, a special ability that will aid your character such as buffing teammates, unlimited ammo for a short period of time; among others. As you play online matches, you’ll be rewarded with Spirit points and skill points. The former can be converted into Skill points and the latter lets players upgrade each character via the deep and complex skill tree. Skills points can be removed and re-assigned. 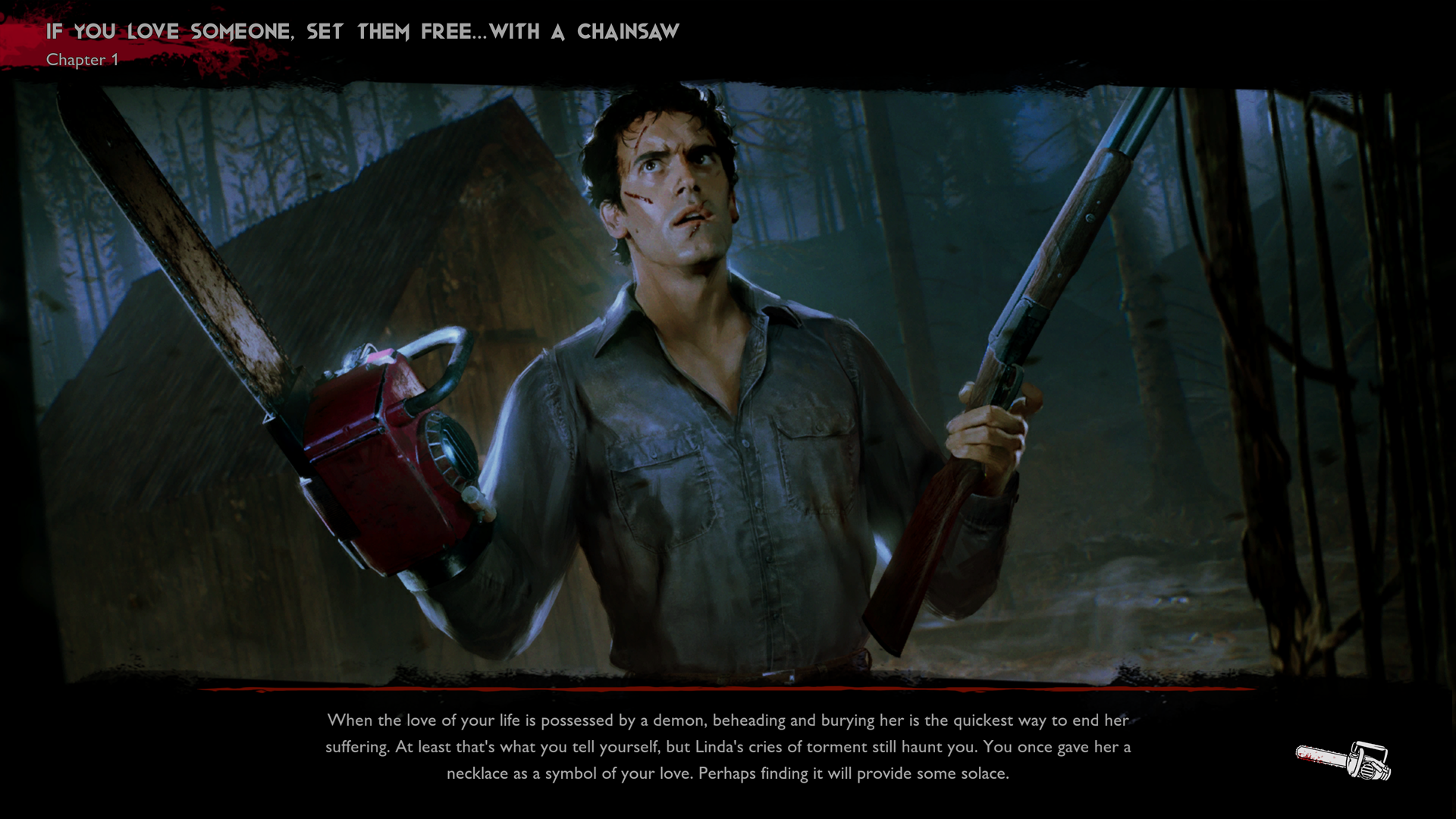 But be careful, your character has a Fear meter. If it fills up, the Evil one can possess character players where you’ll lose control of your character and attack your party. Your pals need to literally beat the demons out of you. Ways to alleviate Fear are by sticking close to your friends and using matches to light up fires in specific areas. Although the game says that finding light sources will reduce your fear meter, but finding already lit areas (like a lamp in a house) seems to not affect your fear meter.

You can also choose to play as the evil forces of the Kandarian army. You’ll have the choice between three different armies each of them having a leader such as Evil Ash or Eligos. When playing as the Evil One, you can set scare traps, and possess trees, cars, and characters. In order to achieve this, you need to collect red orbs peppered through the level. Controlling the evil one is tricky and requires a bit of practice because it feels like walking drunk in Grand Theft Auto V. Also the game is crossplay; meaning chances are you’ll end up playing with PC players who possibly cheat. 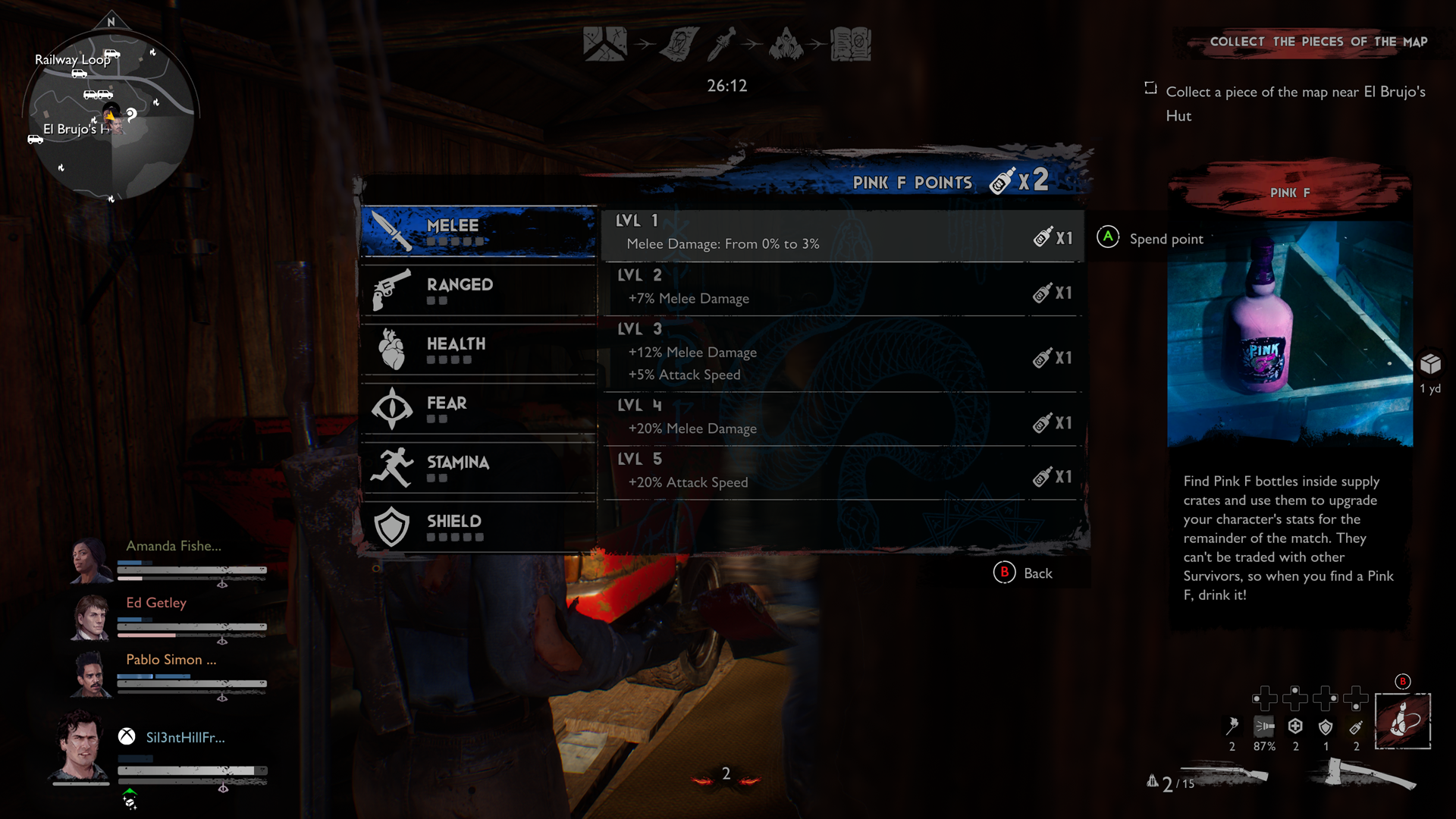 There’s a handful of ways to play: online as a Survivor or Kandarian demon, online with other players against A.I. controlled army of demons, Solo play (your teammates and enemies are A.I. controlled), and private match. If you want to take a break from multiplayer shenanigans, you can jump into Mission mode which is a single-player experience where players can relive certain movie sequences; adapted for gaming purposes.

But unfortunately, not all is perfect. The first thing being there are no checkpoints in single-player missions, so if you die just before the end of the level, you’re thrown back to the start of the mission. Solo missions are also brutally hard. As with any multiplayer experience, there’s the question of longevity. Unlike Call of Duty games, Evil Dead the Game has the sole 4vs1 game mode, so depending on if the developer supports the game with content, the player count could go down in a few months. There’s also a lack of visual cues for when your health gets too low; given that the health meter is tuckered in the bottom left corner of the screen, it’s easy to lose track of it and die when you don’t expect it. The development team also mapped the attack buttons to RB and RT for melee attacks; it feels clunky and counter-intuitive. 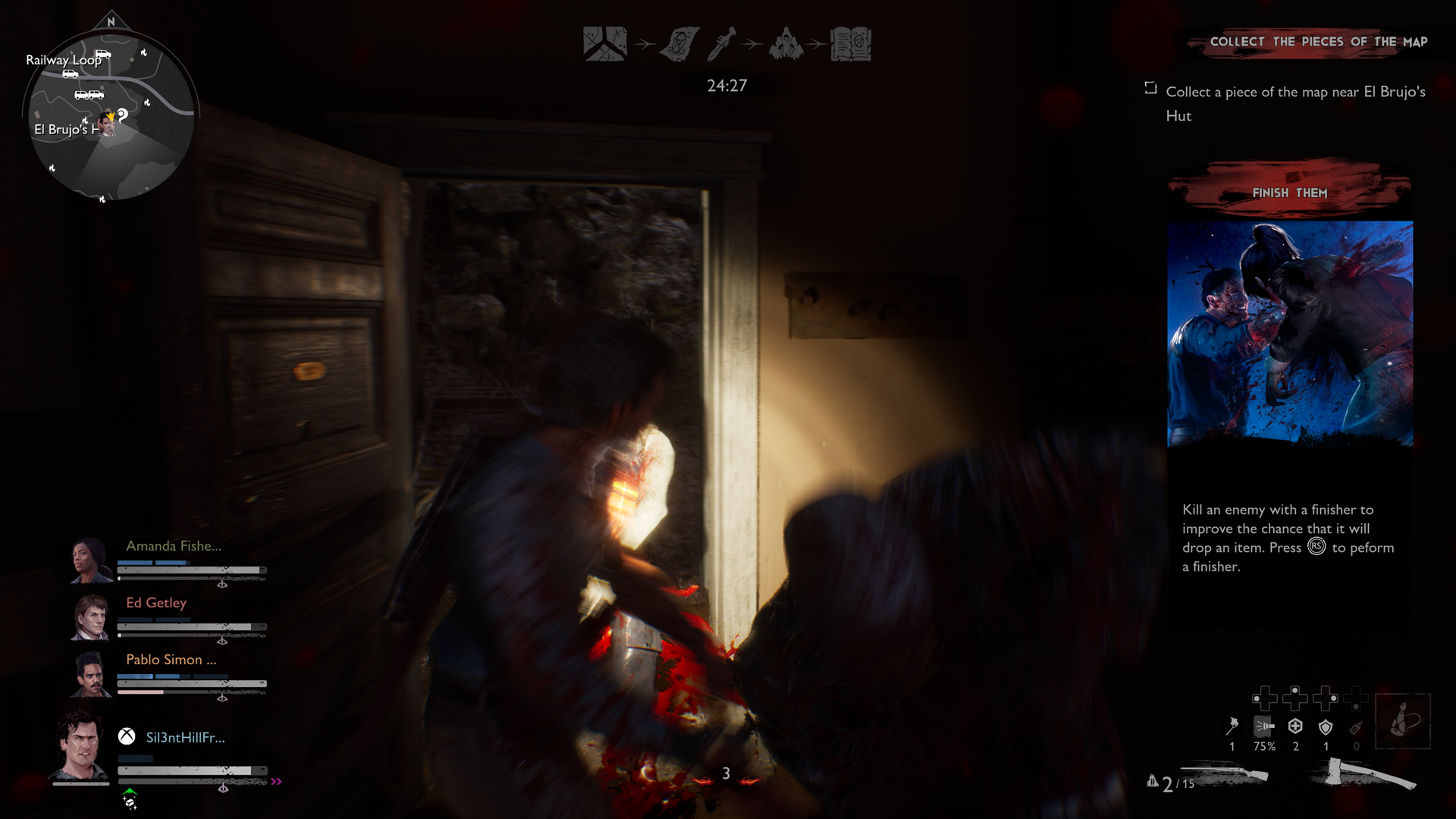 I know this seems to be a common trend for most multiplayer gaming experiences, but unfortunately, the game punishes players who’d rather play solo as they can’t earn XP when playing. Even playing with other human players against A.I. receives less XP. I would understand getting a fraction of possible XP when playing solo would be better than none. Relying on the movies and tv series for single content is a double-edged sword whereas it’s fun to play through updated movies/tv series events adapted for gameplay, I also feel like it’s a bit lazy as nothing beats a fleshed-out story campaign that can expand on the existing universe.

The game looks great overall. Environments and levels are highly detailed; most characters look like their human counterparts, aside from Kelly from the Ash vs Evil Dead series. She’s barely recognizable (I only knew it was her because of her name). Although I won’t hide the fact that I did experience a few glitches; where one time I was stuck in a doorway; or the camera “morphed” behind my character’s face so I could see their eyeballs and teeth (made me think of the hilarious Assassin’s Creed Rogue faceless bug). Audio-wise, the game is actually pretty solid. Voiceover work is on-point overall and Bruce Campbell shows that he still has what it takes to make Ash, Ash. The soundtrack is fun and atmospheric; although I haven’t watched the movies and tv series in some time, it didn’t really resonate with me and sounded a bit different than the score used in other media. The narrator gets annoying really fast.

While I did have my reservation about Evil Dead The Game, I’m actually surprised at how fun it is. The unique multiplayer mode is really fun, addictive and mixes various gameplay mechanics to keep players on their toes. Whereas the single-player content offers a solid, albeit brutal, experience for those looking to experience more “story” focused content. Sure it’s not perfect, but better than some AAA titles. For the price tag, buying Evil Dead The Game is a no-brainer. Groovy!