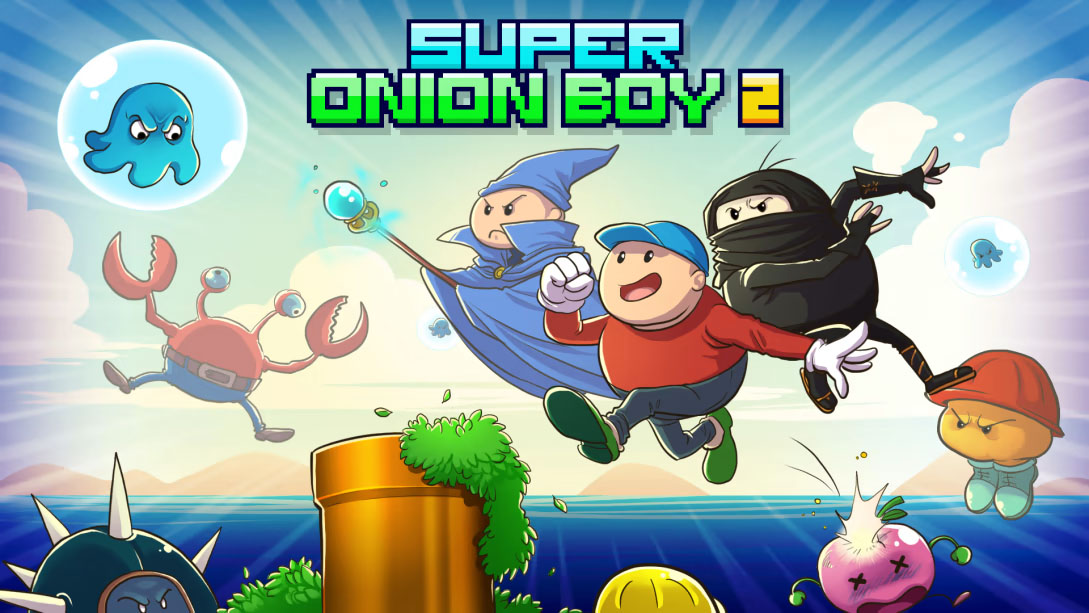 Super Onion Boy 2 tells the story of a nameless onion whose mission is to save his friends, fellow vegetables, from the grasp of a terrible monster who kidnapped our onion’s friends with its unique, spooky psychic powers.

Super Onion Boy 2 is a 2D platformer where you’ll navigate from point A to point B of each level all the while picking up coins (collecting 100 will reward players with a 1-Up), stars (each level has 5 of them), opening red and blue chests and beating up enemies that stand in your way by jumping on their heads. 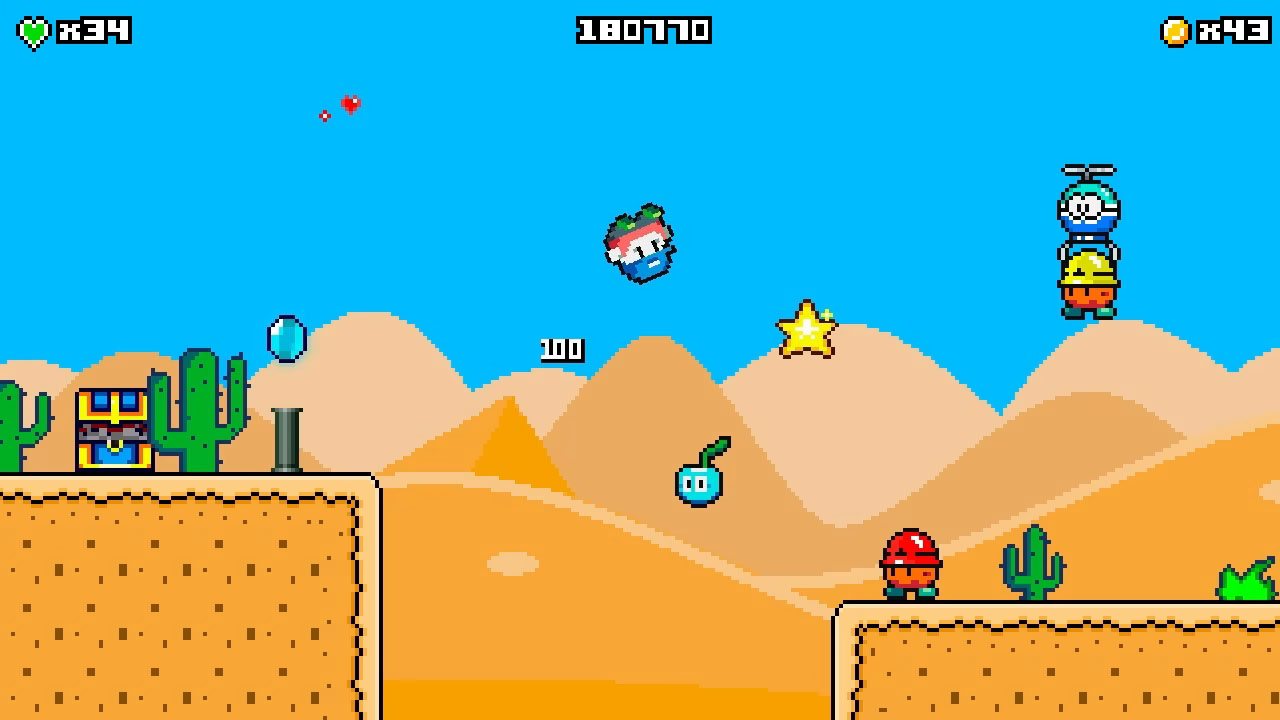 While both types of chests contain a handful of coins, they do offer specific perks. While red one will also drop a heart, which can be picked up to avoid one-hit deaths, the blue one also drops a unique suit: you can be a ninja that double jumps, a mage that shoots blue fireballs from his staff or a magic bubble boy so you can float when holding the jump button.

Each level provides its own unique challenge with enemy placement and various obstacles like pits and spikes. Thankfully, given the very limited health options for our little protagonist, there’s a checkpoint mid-level in every stage. When you have a suit on, you can sustain 2 hits before losing it and a third hit will result in a death if you don’t have a spare floating heart. 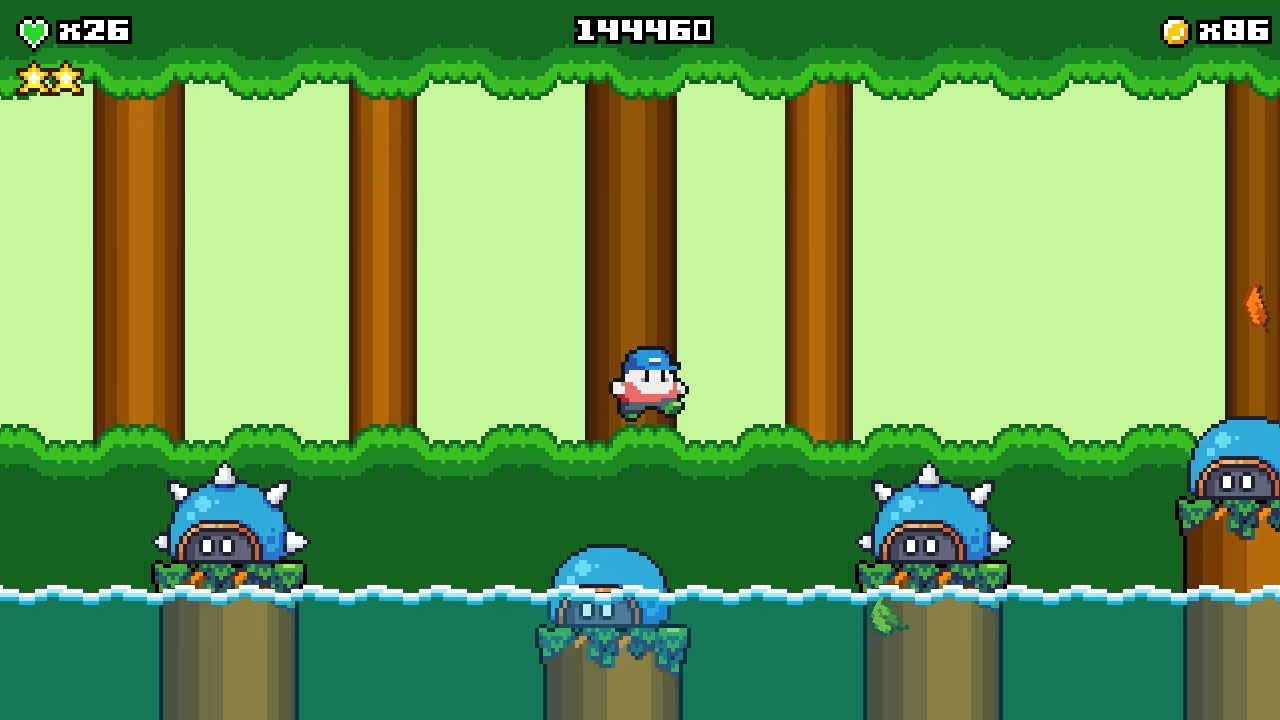 The game does have a few annoying issues, mostly questionable hit detection. A few times where I clearly hit the enemy on their heads, I ended up dying instead of killing the enemy. But when I respawned and perfect the exact same jump on the same enemy, it would die. Also, when disguised as the mage, if you jump and shoot, the character stays mid-air, so if you try to shoot a flying enemy over a pit, chances are you’ll fall down because the moving platform will have time to move away.

Super Onion Boy 2 has a classic 2D 8-bit pixelated look that would have made a great game during the NES era. Each level is uniquely designed and widely colorful. If you’re a long-time fan of games published by Ratalaika Games when you boot up Super Onion Boy 2, you might the game’s theme as it is the exact same theme as Foxyland; a game Ratalaika published way back in 2019. Duplicated music aside, the score is a cute chiptune soundtrack to get you bouncing on enemies. Much like the title track, some tunes sound awfully familiar to tracks heard in the two Foxyland games. 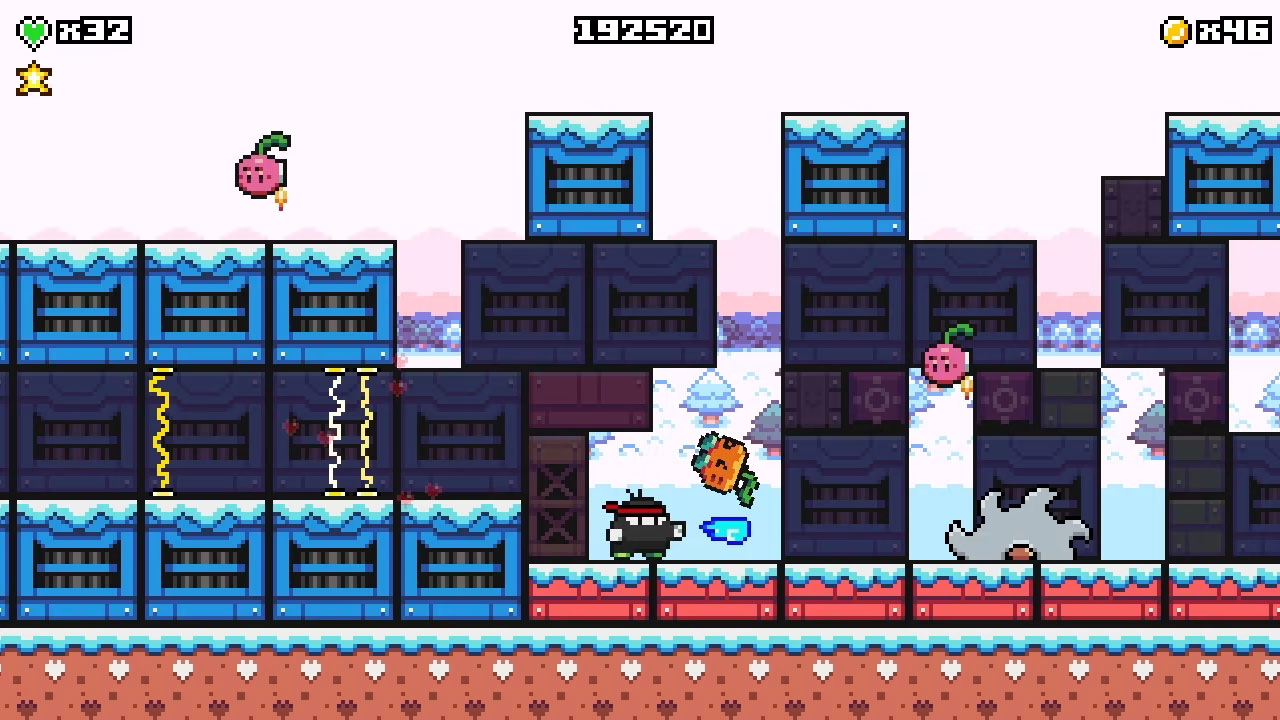 Overall, Super Onion Boy 2 is a great addition to the platformer genre. It’s easy to pick up and play, addictive and the “suits” are pretty unique and provide additional skills to the protagonist. While the game does overstay its welcome by 10 levels as it gets repetitive pretty quick, it has a unique charm that will have players go “just one more level”. If you need a bit size experience with very easy 1000Gs, then look no further than Super Onion Boy 2.